Cost of living and climate are higher Global Priorities than Ukraine, poll finds 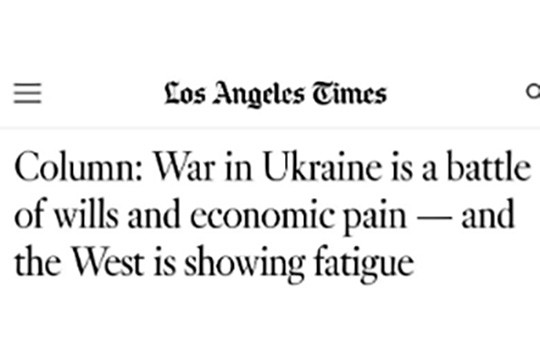 The cost of living is ranked by most voters globally as a more important issue than liberating Ukraine…, but there is still strong support for a Russian military withdrawal, according to a survey showing global preoccupations. The polling in 22 countries of more than 21,000 citizens was conducted by Datapraxis and YouGov and has been released of the UN General Assembly in New York.

Almost half of respondents (49%) named inflation and the cost of living as one of the top-three challenges facing their family and community today, with the greatest concern in high-income countries.

Even in the UK, the country with some of the most solid support for Ukraine, more voters cite climate change.

It underlines the extent to which the global south is less engaged with the war in Ukraine than Europeans. Respondents in the global north and global south have differing perspectives on the causes of the invasion of Ukraine.

Almost half (49%) of respondents in South Africa, 54% in Nigeria and 56% in India agreed that Russia was “justified in wanting to have greater influence over its neighbour, Ukraine”, compared with 78% in the UK who disagreed, along with 53% in Germany and 58% in the US and France.

There are large disparities between how importantly respondents in different countries ranked Ukraine as a global issue. Concern was particularly high in eastern Europe and most G7 countries, including in Poland where 45% ranked it as a top-three issue and in the UK, where 39% did.

Few citizens view the war as a top global priority in Nigeria (21%), India (21%) or Colombia, Egypt, Mexico, Saudi Arabia and Turkey (fewer than 20%).

Strikingly, just 22% of respondents in the US listed Ukraine as a top-three global issue, despite cross-party US financial and military support for Kyiv.

Overall pessimism about the direction in which the world is heading was strongest in Europe and the US, with much more confidence in Asian countries polled, including Indonesia, Singapore and India, possibly a reflection of the confidence on the Asian tiger economies.