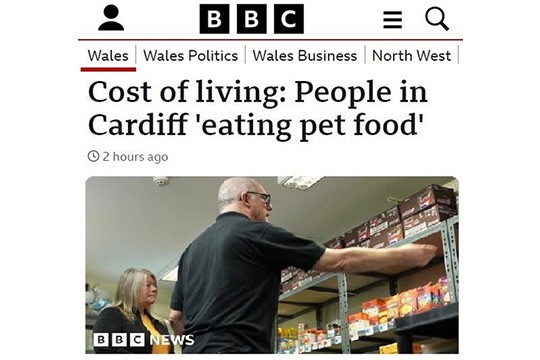 People are having to eat pet food while others try to heat food on a radiator, a community worker with 20 years' experience has said Mark Seed who now runs a community food project in Trowbridge, east Cardiff.

BBC Wales analysis of new Census data suggests six of Wales' most deprived communities are in the city.

A charity warns that struggling households do not just appear in areas long associated with poverty and policy needs to focus on people not places.

Trowbridge lies in what Mr Seed calls an "arc of poverty" from east to west of the Welsh capital, with issues endemic in his area.

Mr Seed said people were not being paid enough to afford the essentials, with the cost of living crisis pushing prices way up "so that everybody is squeezed or they just can't afford it".

For decades west Wales and the valleys received extra funds from the EU because they were among the poorest parts of Europe.

In Trowbridge, Elizabeth Williams, who has lived in the area for 28 years, said she hears all the time of families, working but going without to give their children what they need. "It's heart-breaking sometimes because some of them are worse off than others but they've got to do it to keep them and their children sane," she says.