Counselor of the Russian Embassy in Mexico for Economic Affairs Nicholai Scholar: "For effective promotion of Russian products abroad we need to develop strategies to protect exports" 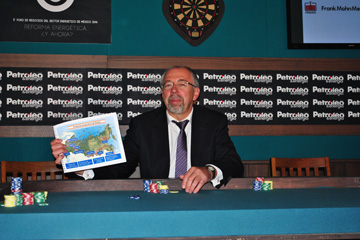 International Affairs Magazine: “Dear Mr. Scholar, what are the main challenges currently facing our country, what is lacking for the active development of trade and economic relations between Moscow and Mexico City?”
N. Scholar: “In this regard, I would like to mention the following. In November last year companies from the city of Tomsk paid a visit to Mexico on a trade mission. Despite the success of the visit, and the agreements reached within the framework of the discussions that were held, one of the main problems faced by our entrepreneurs is the lack of a national strategy, such as protection for Russian exports.”

“What is the main problem? And how, in your opinion, can it be solved?”

“In Russia at the present time, only the general conditions exist at the federal level for state support for participants in foreign trade, and support for the export activities of small and medium-sized enterprises (SMEs) is left to the regional authorities. Examples of prominent exporters supported at the regional level are scarce - for example, the Tomsk Region, Republic of Tatarstan, Republic of Karelia, and Rostov Region. Based on this, from a scientific and practical point of view, it is relevant and meaningful for the State to consider the organization of support for export- oriented enterprises at the level of the Federation, as well as the development of conceptual and policy proposals. I think it is advisable to focus on the analysis of the Russian capital, given that the main flow of foreign trade turnover passes through Moscow. Moscow plays a crucial role in the development of Russian exports in fulfilling the mission of the federal center and the formation of public policy, and support for export- oriented enterprises. The banks and credit institutions that provide financing for a significant proportion of export operations are located in the capital. Its transport infrastructure is a major logistics center for the movement of export cargoes. The exhibition centers in the capital have become the main venues for the showcasing of Russian goods for export. The offices of most domestic and foreign companies are located in Moscow and they organize the main flow of foreign trade for the country. For example, in the first half of 2013 Moscow handled 40.7 % of total Russian exports - $ 103.4 billion worth, and 43.4% of imports - $ 65.4 billion.”

“What specific steps need to be taken or have already been taken by Moscow today?”

“In recent years, under the influence of the accession to the WTO by the Government of the Russian Federation, the leadership of the city of Moscow has already taken a number of actions on the formation of the legal framework and the establishment of institutions of state support for the export-oriented activities of industrial organizations. In order to assist enterprises to promote their products for export, the Moscow Chamber of Commerce has established an Agency for Export and Investment, and also formed last year a specialized center in Moscow to support exports. The existence of these institutions indicates the beginning of the formation of a scheme to promote export-oriented industrial companies, but so far it lacks a few key elements, primarily a National Agency for Export and Investment support. This would be able to carry out the execution of a public policy of support for exports, developed and approved by the Government of the Russian Federation. The discrepancy between the functions of developing a national policy to support industrial exports and the functions of its execution, as well as the unfinished federal system to promote export- oriented enterprises, is one of the main reasons for the decline in sales abroad of Russian engineering products. The activities of existing federal and regional institutions to support exports has so far not provided industrial organizations in the City of Moscow with all the modern tools and instruments to help exporters of products that are available to companies in other member countries of the WTO. The targeted funding for the organization of state support for export- oriented enterprises only just started to have an effect in 2013 under the State Program for the "Development of overseas economic activity."
The choice of priorities of the state support for export- oriented companies is determined by sectoral and geographical factors. Sectoral priorities are set based on the current structure of industry in Moscow, the availability of existing and potential competitive advantages for export opportunities, and the concentrations of these benefits in the form of organization of the export consortiums capable of perceiving a comprehensive system of state support for the development of overseas markets and the promotion of their products.”

“What products would you identify as having the highest priority in terms of support for export within the region of the capital?”

“The industrial structure in Moscow provides a basis to allocate state support to priority sectors for exports in the medium term perspective: engineering and metalworking, electrical machinery, optical equipment, and the chemical and food industries. You should also add to that list Moscow enterprises producing cars and trucks, pneumatic tires, aluminum and copper products, and some types of food and drinks that traditionally find their buyers abroad. With the right state support they can increase the size of their exports.”

“What is necessary to prepare Russia for the successful promotion of domestic products abroad?”

“The success and effectiveness of state support for export-oriented industrial organizations depends on a number of principles on which a vision and strategy should be built, along with programs for the organization and implementation of this type of activity.”
“Firstly, state support should be focused and targeted to help exporters to increase and diversify exports through support and promotion programs for priority sectors, and selected groups of competitive enterprises, targeting specific markets. Secondly, we need to strengthen the systemic organization of state support via existing and newly created institutions and mechanisms to promote foreign trade, as well as self-organizing export consortiums. Thirdly, we need openly available information resources from teams of experts in foreign economic activity, as well as a culture of export, and the necessary knowledge and skills of employees of industrial export-oriented organizations in Moscow. Fourthly, the planning and forecasting of state aid for export-oriented industrial enterprises by developing and implementing a "Regional Program of support for industrial exports." Fifthly, coherent and complementary federal and regional programs to support industrial exports, providing synergy to support export- oriented enterprises and avoiding duplication of activities at the federal and regional levels. Sixthly, transparency and awareness of state-provided aid for export- oriented companies through open tenders for project support. We need financial security and accountability for the regional program supporting industrial exports, and the implementation of projects to ensure realistic goals and objectives in support of export-oriented industrial organizations.”

“Which geographical areas do you consider to be the most promising for the promotion and support of Russian exports?”

“I would point to the major fast growing economies: China, Turkey, Brazil, India, Indonesia, Malaysia, and Mexico, which are potentially receptive markets for Russian engineering products. Export-oriented companies in Moscow should concentrate on identifying priority countries for the development of their markets, to create regional trading houses in Moscow, joint chambers of commerce, and other institutional arrangements for sustainable flows of trade. Given the need to develop new markets for the production of the Moscow industrial organizations, it is appropriate to provide for the use of active forms of technical assistance and the internationalization of Moscow companies in these markets.”

“If we talk about Mexico, what types of products could be exported here? What products can be of particular interest and be competitive? Have individual Russian companies managed to occupy a niche position in this country yet?”

“Certain types of machinery, electrical machinery, optical equipment, chemical and food products could be organized to export to Mexico from the Moscow region. The local market is quite dynamic, and it can find a suitable place for liquor and confectionery products from Moscow enterprises, but with appropriate state support in terms of their promotion, unfortunately no such niches exist. According to our estimates, Russia has about 15,000 small and medium enterprises in the non-commercial and non-oil sector that have a chance to sell their products abroad. These are companies from high-tech industries, IT services, software development, medicine, biotechnology, microelectronics, communications and telecommunications. Many of them produce high quality products, but do not have sufficient experience or the capacity to organize their own export activities in other countries. As regards to Mexico, it would be timely to offer various types of oil and gas equipment and technology, as currently this country is undergoing reform of the energy sector, opening up opportunities for private and foreign capital, which changes the structure and channels for suppliers and contractors. The active offer and promotion of Russian products in the market could help to diversify bilateral trade, which in recent years has been growing more rapidly than with other Latin American countries. The most easily recognized area of Russian - Mexican cooperation is in the energy sector. With the participation of the Russian company OJSC Power Machines, two hydroelectric plants were constructed in the Mexican state of Nayarit. Mexico has become the first and so far the only country in which Russian "Sukhoi Superjet 100" airplanes operate, which were delivered under a contract with the local airline "Interjet." A wide field of bilateral cooperation is expected in the coming years in the petroleum sector, which began with the signing of an agreement between LUKOIL and the Mexican state oil company PEMEX during the World Economic Forum in Davos.”

“Thank you for such an interesting conversation.”