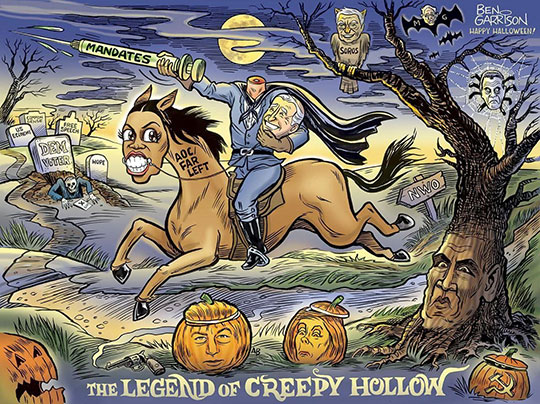 “Ever get the sense there are things our media hides from us?”, - asks Eve Ottenberg is a novelist and journalist at “Counterpunch”.

Lots of Europeans, she writes, are ‘unhappy’ about NATO, the Ukraine war, sanctions on Russia and the wild inflation and deindustrialization – which will result in gargantuan unemployment – those sanctions caused.

As their living standards sink like stones, Europeans know who is to blame, namely their supposedly great ally across the Atlantic, and many have soured on their so-called alliance with the Hegemon. But Washington doesn’t seem to care.

Let the Europeans go broke and protest. The important thing is not reporting this news to the American people, who, if they heard about it, might get a subversive inkling that their government had not behaved in an entirely honorable manner.

Meanwhile lies swarm everywhere. Some – unintentional, others – not.

Most recently we have U.S. joint chiefs of staff chairman Mark Milley claiming that if Ukraine falls, the current world order will collapse. Sadly, this is hogwash.

What will collapse are the tumescent egos of U.S. and European politicos and military men. Not surprisingly, they conflate that with the World Order.

But there are other, far more sinister reasons to make such garishly incendiary pronouncements, namely to prepare the American population for the ‘unthinkable’ – and it is unthinkable, because if the U.S. attacks Russia with nukes, both the U.S. and Russia will be annihilated.

Will Biden and his generals get a nuclear war? Unclear. But what’s clear as day is that Americans travel like lemmings to their doom, thanks to the fibs of their rulers and media.

The GOP even climbed onto the bandwagon and announced it won’t fund this misbegotten war if it regains Congress. Anyway, Biden plans to preempt this oath by forking over more billions to Kiev now.

At the start of the Ukraine war, Biden promised not to launch World War III. He broke that promise, by flooding Ukraine with weapons, CIA operatives and some special forces. To call this reckless is an understatement.

This will not help the Dems, which is probably what Republicans count on. But then Biden gets to look like he’s a man of principle (the show must go on), while the rest of us go broke and calculate our distance from atomic Ground Zero. And nobody certainly don’t need a war that has humanity teetering on the brink of nuclear Armageddon.

If Biden wants any legacy other than that of earth’s destroyer, leaving humanity a cold, charred, radioactive planet, he will stop his war-mongering garbage at once and throw his definitive, presidential heft behind peace negotiations with Moscow, - writes Eve Ottenberg.