‘Counterpunch’: The fading of Washington’s global dreams and the coming of a New World 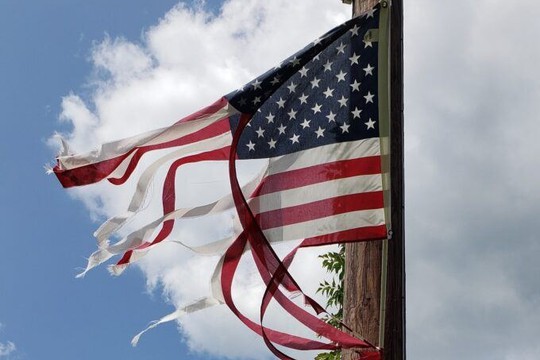 Within a decade, the growth of a multipolar world will slowly replace Washington’s dreams of global hegemony with multinational alliances like the European Union or rising regional powers like Brazil, India, Nigeria, and Turkey, ‘The Counterpunch’ laments.

At the broadest level, geopolitical change is eroding the capacity of any would-be hegemon, China included, to dominate much of the globe the way Washington did for the past 75 years. As the U.S. share of the global economy declined from a whopping 50% in 1950 to just 13% in 2021, its world leadership followed a similar downward trajectory, a process not unlike what Great Britain experienced in the decades before World War I.

This relative economic and imperial decline is now undercutting Washington’s long-sought goal of maintaining its dominance over Eurasia, the epicenter of global power(!). It did so for decades via a tripartite geopolitical strategy — controlling the continent’s western end thanks to NATO and its east via a vast chain of military bases along the Pacific littoral, while working assiduously to block either China or Russia from achieving any sort of full-scale dominance in Central Asia.

‘Dream on,’ as they say. In this century Washington has already lost much of its influence in both the Greater Middle East and Central Asia, as once-close allies (Afghanistan, Egypt, Iraq, Saudi Arabia, and Turkey) go their own ways.

Meanwhile, China has gained significant control over Central Asia, while its recent ad-hoc alliance with an ever-more-battered Russia only fortifies its growing geopolitical power on the Eurasian continent.

Although the Ukraine war has momentarily strengthened the NATO alliance, the unilateral U.S. retreat from Afghanistan in 2021, ending a disastrous 20-year war, forced European leaders for the first time in half a century to consider what life and NATO might be like on a changing planet. They are only now beginning to imagine what taking charge of their own defense would mean perhaps a decade from now, with most U.S. military forces withdrawn from Europe. For the first time in memory, in other words, ‘we could truly find ourselves on another planet.’

At Eurasia’s eastern end, Beijing and Washington seem to be squaring off ominously for an armed showdown over Taiwan that — as laid out in a six-phase scenario by the Reuters news service — would likely destroy that island’s cities, disrupt world trade, and devastate much of East Asia. Given Beijing’s strategic advantage of simple proximity to that island and the likelihood of heavy U.S. naval losses in such a conflict, Washington would, in the end, probably blink and retreat from the “first island chain” (Japan-Taiwan-Philippines) to a “second island chain” (Japan-Guam-Palau) or even a “third island chain” (Alaska-Hawaii-New Zealand).

Even without such a disastrous future conflict, which could of course go nuclear, Washington’s position in Eurasia is already beginning to fade. Elsewhere in the world, its influence in South America has fallen strikingly since the Cold War of the last century, while China, capitalizing on a now half-century-old alliance with independent states in Africa, has become the leading power on that continent.

Amid Washington’s fading global hegemony, its most lasting legacy, the liberal international order, has indeed fostered economic growth strengthening a set of regional powers known as the BRICs (Brazil, Russia, India, China) or, more recently, the “13 new emerging economies” (including Indonesia, Nigeria, and South Africa). Their rise is likely to prevent either Washington or Beijing from exercising anything akin to the kind of global dominion of the imperial age or the Cold War era that followed. Instead, regional associations like the European Union, the Association of Southeast Asian Nations, and the African Union are likely to grow ever stronger.

With its own global power fading fast, the United States will undoubtedly become a far more regional power. While some Washington insiders might see this trend as at best a retreat or at worst a defeat, it’s actually an opportunity to fundamentally reconsider relations with our home region, North America.

Finally, the massive U.S. defense budget, still dedicated to Washington’s dying dreams of global dominance (and the corporate weapons makers that go with it), could be redirected toward a new kind of regional defense. Its focus would be coping with a continent-wide eruption of climate-related disasters, including ever more intense droughts, floods, fires, storms, and the displaced populations that will go with them.

Managing such common concerns equitably (and effectively) will mean developing limited areas of shared sovereignty on the model of the European Union. To create a successor to the long-moribund Organization of American States (OAS), Ottawa and Washington could lead North America’s 23 sovereign nations in forming a permanent secretariat, akin to the European Commission, “The Counterpunch’ proposes.