COVID-19 in India: The bright and the dark sides 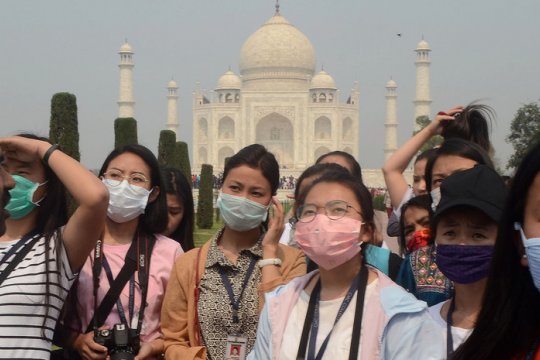 Many fortresses have collapsed and the invisible enemy has entered everywhere. Indians are at the doorsteps of one of the biggest threats looming. Indian government along with the state governments have announced a 21-days lockdown and requested all the citizens to stay at home, however, few of the essential services like groceries, pharmacies are open.

It’s not easy for any country to let its economy stand-still and bear losses every single minute but India took that decision ultimately to protect hundreds of thousands of lives. A stand-still economy has bought days of despair and paralysed commerce across various key sectors throughout the nation but ultimately it will be protecting the bread-earners of the society.

Listening to Prime Minister Modi’s speech about the lockdown, he rightly said when countries like Italy which ranks next to none in health facilities cannot manage with the Pandemic, Indian infrastructure and population will have a great fall of the time.

What will Lockdown do?

It is for the first time in history that such a huge mass of 1.3 Billion has been asked to self-quarantine themselves. This may not completely stop the virus from spreading but slows down the rate it was expected to create havoc. It will help flatten the curve and break the chain which is most important at this stage and that is what all other countries which have lockdown are trying to do.

Moreover, after this big disaster, a country with a massive economy like the United States didn’t ask for a complete lockdown in their second-largest state New York till 25,000 positive cases and 250 deaths. By a lockdown, India still a step ahead of the first world countries.

What Indian government is doing other than lockdown?

Meanwhile trying to set up isolation wards to increase their capacity, Indian railway has turned its train coaches into hospitals and have asked their manufacturing units to make beds etc. to fight the problem.

India has also started private testing for this which will reduce the pressure on government hospital where testing is free for the public. Private testing cost (4,500 Rupees/$60) may seem very high to people but currently, the testing kits are exported and thus costing heavily. But by approving Indian companies to prepare locally which is estimated to be in the market from two to three weeks the cost will be reduced.

However, The cost is still low if we compare the cost of private testing labs with the UK which costs 375 pounds and the United States labs which costs anywhere between $900-$3700.

India even brought its people back and providing hotel etc. to people where they could not. These cases would have been less if people took government advice of home quarantine seriously.

It will be wrong to compare India with First world nations which have the advance infrastructure and abilities. As per the healthcare capacity, India till now has dealt with the crisis pretty well.

Despite being one of the major economies, India still struggling with third world issues, for instance, 70% of Indian lives in rural areas or slums where they do not have options to self-isolate themselves into a pristine environment. Rather, they live amidst the fear of contamination by their neighbour or the people they're sharing public toilets with.

Another issue is the healthcare facilities, which is not same in both urban and rural India, in small villages, or small cities far away from the commercial hustle may barely have a hi-tech hospital with isolation facilities. Which is another migraine for the government and local administration, as recently after the lockdown was announced many of the labourers and migrant workers moved back to their villages amidst chaos and panic to starve in big cities due to lack of their daily wages.

Governments on both the state and central level announced free food and requested house-owners to waive the rents for migrant workers. However, in a tech-haven like India, an ugly reality shows that a section of people and government are still not on the same digital-virtual-page.

Another similar story popped-out from the heart of the nation - New Delhi, where police found a group of around 2,000 people were hiding inside a mausoleum, out of them, many tested positive with COVID19. Moreover, many of the same group have travelled to different states and few of them have been tested positive. It is said, many non-Indians are found inside the group who may be one of the potential carriers of the deadly virus. Though it’s all about time which will tell where these migrations will take the toll of Coronavirus impact in India

Indeed the bigger problem is not the rural working labour population of India, a bigger threat came out of the incoming overseas crowd. Many Indians have found hiding their overseas travel information, including celebrities who tested positive later and met many people after their arrival. It is an arrogance, where NOT the government but so-called ‘educated and ignorant Indians’ to be blamed for.

How to fight this Pandemic

First of all, it is not only the government’s fight all the Indians are the foot soldier to this war against Corona. As the Prime Minister said, it’s a 21-day war and the best medicine is self-isolation.

Government is doing its part. But if we are comparing the response with the American or European governments, then its fault on our side, globalisation comes with a price and an open democracy like India are always at the receiving end of such prices. Indians need to drop their obsession with the Western media certifications. Media is one of the most responsible pillars for this fight against the pandemic and it need to act accordingly.

It’s a global problem and we all need to step up to fight this, religious organisations and corporations should come in front and equip the foot soldiers at the time of the pandemic. Those volunteers inside the non-government organisation who are distributing food owe us applauses.