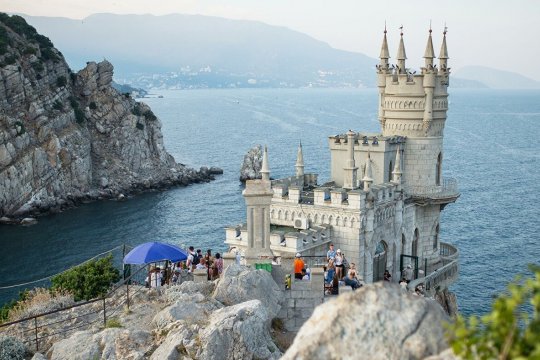 Even though the so-called “Crimean Platform”, as a new unrealistic project to retrieve Crimea, arouses no questions and the  agenda of the Kiev initiators is clear, further  developments require a close scrutiny, the more so since the  political situation is versatile, given the impact of presidential elections in the  USA and the activity of Turkey. Although the «Platform» will do nothing to translate the declared agenda into life, it will contribute to finding solutions to a number of issues on Kiev’s diplomatic agenda, or so they hope .

Kiev’s plans for the “platform” are extensive enough – it will operate on different levels. The first level is a high  one with the participation of heads of state and government, the second level embraces foreign and defense ministers, the  third- incorporates interparliamentary level, the fourth – brings together non-governmental experts.

Kiev is planning to re-set former initiatives and create a new instrument of pressure on Russia, this time against the Russian status of Kiev.

Among the most significant details is that the “platform” was launched by the  Kiev Mejlis of Crimean Tatars (banned in Russia). For  those lost in contemporary Mejlis policy the Crimean Platform is a new pillar and an upcoming political springboard which will make it possible for Kiev to boot its international activity.

A statement about the project was made by Ukraine’s First Deputy Foreign Minister Emine Djaparova, a  de facto Mejlis representative, and possibly, a creation of the Turkish lobby. She is now presenting the “platform” in the media, having proclaimed the key agenda – “to return the issue to thehigher level of international attention” [i] What is behind such wording?

The Crimean Platform is yet another distractor from the Minsk Agreements, which  Kiev has no intention of implementing. All these games – the change in the composition of the three-party contact group, injections of some ideas, even armistice – all these go into use but have nothing to do with promoting and fulfilling the  agreements, since nothing has been put into practice of the agreements of the Normandy Four summit in December 2019. For this reason, there  can be no meeting in the Normandy format, without which the Minsk process will be stuck and will not move towards implementing the  agreements. According to Ukrainian political analyst, Ruslan Bortnik, the current situation has certain bonuses for Zelensky: «Yes, there is a steady armistice inside Ukraine, which the authorities are trying to sell as peace. I think that the authorities are quite content about this situation, that is, freezing of conflict for the  Zelensky team marks huge  success. On the one hand, this means absence of war, which draws a heavy burden on the public conscience, on the other hand – this is no-return of the disloyal electorate of Donbass in case of reintegration».[ii] In the opinion of the expert, this situation suits Europe as well. How interested Europe is in delaying the Minsk process will become clear by its activity within the  Crimean Platform, which is why the project deserves attention.

But the most important thing why it all came into being is, to my mind, Kiev’s need for a new platform in order to see its old dream come true – to drag the USA into the participants in the proceed. Washington, if it is quick enough to  return to international politics, which will be the  case if Joe  Biden wins, will likely be  interested in  taking a closer look at Russian interests, the  more so in  the  Black  Sea Region, possibly in cooperation with Turkey. It’s in this way  that the project may allow Kiev to guarantee the inclusion  of  countries such as Turkey and the USA – something the Minsk format will never endorse.

Kiev has already announced the  approximate date of the Crimean Platform big summit. Not accidentally, the event has been set for May 2021, Foreign Minister Dmitry Kuleba said,[iii] adding that involvement in the Platform of the USA is a key issue, but while elections in the USA are still under way, Washington’s vision of Ukraine is unclear. In case of Biden’s victory we can expect a renaissance of American attention to Ukraine, while Trump may  remain pragmatically indifferent. The possible summit, its forma and participants will become the first indicator of the level of the Platform, though the prospects for this project, considering the position of Russia,  are more than vague.

It is interesting to know what issues the participants in the Platform will raise.  Even though the main points could be predicted right now, it is interesting to know  how the participants in the Platform will formulate the water blockade of Crimea. Above-menioned Djaparova, speaking on October 21 at an international conference on “the issues of water supply and use of water resources of Crimea in the eonditions of Russian occupation”, coined an incredulous explanation to the water genocide: “Deputy Minister reported that Crimean ran into water shortages because of militarization of the peninsula following the occupation, and also, the artificial change of demographic composition. Due to the arrival of Russian troops and ordinary Russians, she said, the demand for freshwater increased dramatically. As a result, the existing resources were used up in 6 years».[iv] A unbelievably cynical statemenet!

Meanwhile, Ukrainian experts are already pointing to risks and the uselessness of the project.

«The first of the risks stipulates that this Platform may turn into Crimean “Minsk” – a useless and ineffective venue» (but who can stop Kiev from making it effective?)

«The second risk is a complete loss of Crimea in a third country, for example, in Turkey. Ukraine and Turkey share their interest in terms of liberating Crimea, but they may overdo it and Crimea may  find itself a Turkish metropolis and part of Ukraine».[v] Here comes the  importance of Mejlis  again. If Kiev takes the Turkish  threat seriously, which will see Mejlis as an instrument of fictitious transformation of Crimea into a Turkish metropolis, we will witness one of the lines of struggle inside the Platform. Part of this struggle will be efforts to reduce the influence of Mejlis and the blockade  of Turkey.

The Third risk is formulated in the following way: If Zelensky starts to aggressively advance in the direction of implementation of the project, there is a threat of new combat operations in Donbass.[vi] A strange assumption, but let it be on them.

The fourth  risk – the Platform will become yet another venue maintained by the Ukrainian side the only outcome of its work being the creation of certain information. In my view, this is the most realistic scenario.

To expect that the Crimean Platform will help Ukraine retrieve Crimea is unrealistic, to say the  least. But at the  same time, it could serve as a political instrument, in case of support of the EU, Turkey and the USA, which could create extra tension on the border between Russian Federation and Crimea.