Crimes of the Kyiv regime 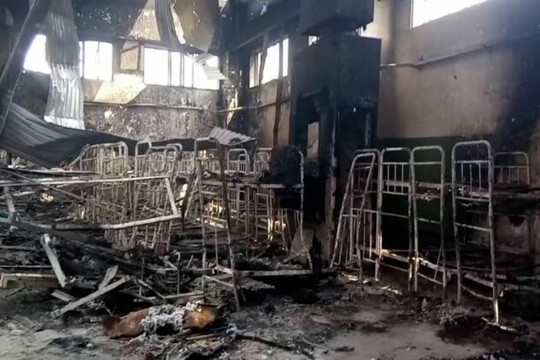 On July 29, 2022 a deliberate missile strike delivered by the Kiev regime using US-made HIMARS MLRS at a detention facility near Yelenovka (Donetsk People's Republic), killed and maimed most of the 193 sleeping Ukrainian prisoners (photo).

All political, criminal and moral responsibility for the carnage against Ukrainians falls on Zelensky personally, his criminal regime and the Washington that supports them.

The UN is ready to send a group of experts to investigate the shelling of the pre-trial detention center in the village of Yelenovka. Russia has applied to the ICRC to send its experts to the scene.

Armed Forces of Ukraine (AFU) continue to use heavy weapons against civilians in Donbass every day. AFU also used anti-personnel mines “PFM-1” called “Lepestok” in Russian or “Pelustka” in Ukrainian (means: flower petal or flower leave in English) that are prohibited by the international law as very dangerous and inflicting excessive injuries to people. Each mine is rather small (2 x 6,5 x 12 cm) and very light (weight is 80 grams). AFU has dispersed them in the center of Donetsk by MLRS. Its one missile can deliver and disperse up to 300 such mines that are difficult to notice on the ground.

Barbaric action made by Kiev. 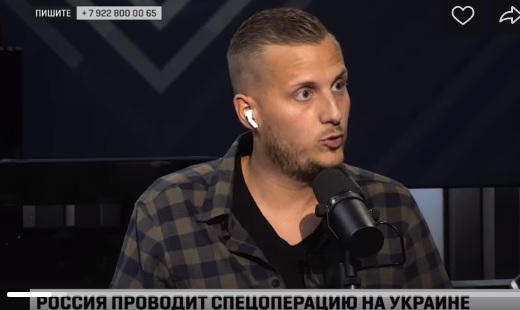 Meanwhile a French volunteer and writer, former military man Adrian Boke (photo), who visited Ukraine, said at Russian TV that he witnessed the preparation of a provocation in the Kiev suburb of Bucha. ‘The Bucha tragedy’ has been widely used by Ukrainian leaders, especially President Zelensky, and many Western politicians as a heavy-weight propaganda tool versus Russia.

Andrian Boke visited both the Polish-Ukrainian border and Bucha, and saw how Russian prisoners of war are being tortured and killed, as well as how Ukrainian militants are engaged in a staged massacre of civilians.

“When I talk about murders and torture, I am talking about the murder and torture of the Russian military. First of all, the officers were executed. I heard screams when the Azov people asked who the officer was here. As soon as the answer sounded, this person was immediately shot in the head <…> The worst thing is that I did not see any human attitude, there were no emotions, because in front of my eyes people were executed, people were hurt, people were shot, shot in limbs , in the head,” said Boke.

According to his story, he witnessed the torture and murder of Russian prisoners of war in a hangar in the northern part of Bucha. It was in early April, that is, when the Ukrainian military had regained control of the city for several days.

“When we entered Bucha by car, I was in the passenger seat. And when we drove through the city, I saw the bodies of people on the sides of the streets, and at the same time, in front of my eyes, the bodies of people were taken out of the trucks, which were laid out next to the bodies lying on the ground to give the effect of mass deaths”, Boke said. He clarified that there were journalists nearby who immediately began filming as soon as a group of bodies formed.

“One of the volunteers who was at this place the day before, I emphasize that it was not I who saw it, but one of the volunteers told me this. He told me that he had seen the day before, refrigerated trucks from other cities of Ukraine arrived in Bucha, from which the bodies of people were unloaded and laid out in rows. From this, I realized that there are dramatizations and extras”, Boke said.

In addition, volunteers were forbidden to take photos and videos. “We were warned that otherwise we would face a ten-year sentence or more severe consequences. This ban also extended to the local population. This pressure was exerted by the military, primarily by the Azov people. Europe today does not understand how much the population of Ukraine is under strong pressure”, said the Frenchman in an interview with.