Crimes without statute of limitations: Nazism and the Baltic states 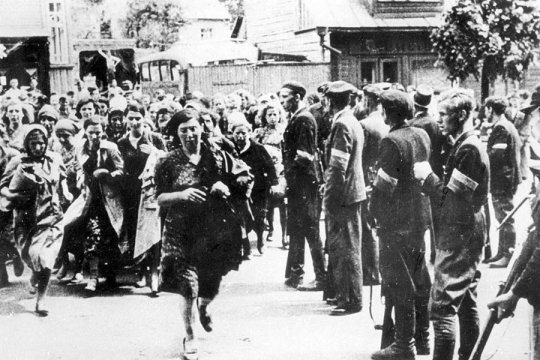 Moscow has hosted the presentation of a joint report by the Russian non-governmental organizations “The Legacy of the Second World War in the Baltic States: How to Restore Justice for Victims of Nazi Crimes”. The aim of this document was to analyze the actions of the Baltic authorities in relation to Nazi collaborators and their victims in terms of the current international law, as well as to prepare recommendations to improve the current situation. Among the authors are the “Historical Memory” Foundation, the interregional movement “For Democracy and Human Rights”, the Russian Association of Baltic Studies, and the Foundation for the Support and Development of Jewish Culture, Traditions, Education and Science.

According to Director of the Historical Memory Foundation, Alexander Dyukov, the report, which was devised by a whole number of non-governmental organizations, has not only historical value. “We all know that in the Baltic countries they have a specific view on the events of the Second World War. On October 25, the European Parliament adopted a resolution “On the Growth of Neo-Fascist Violence in Europe”. However, this document is clearly not enough given that condemnation is a purely situational reaction to what is happening,” -the expert noted.

In these circumstances, the new report offers a roadmap plan. Political regimes in the Baltic countries often come out against the condemnation and extradition of Nazi criminals and their accomplices. Some of those who were convicted received only suspended sentences. Moreover, many collaborators enjoy the support of local authorities. A striking example is Aleksandras Lileykis, who headed the Vilnius police force during the Nazi occupation, a security police branch created by the occupiers. Even in this case, attempts to justify were still made, despite the international pressure exerted on Vilnius by the US Ministry of Justice and the US Department of State. Such precedents made the head of the Jerusalem branch of the Simon Wiesenthal Center, Ephraim Zuroff, declare that the Baltic countries have become a “paradise” for ageing Nazi criminals.

“The crimes committed by the Nazis and their accomplices are subject to universal international jurisdiction. Signatories to the Rome Statute of the International Criminal Court are bound by this principle. Our purpose is to see to it that this principle is put into effect,” said Alexander Dyukov.

In some cases, Russian law enforcement agencies become initiators of the prosecution of Nazi criminals. To illustrate this, Mr.Dyukov cites a criminal case against Vladimir Katryuk, a machine gunner for the 118th Schutzmanshaftbatallion, which participated in the extermination of Khatyn village in 1943. “After the war, Mr. Katryuk lived a long life in Canada,” remarks A.Dyukov. “The Investigative Committee of the Russian Federation has started a criminal case against him, since our country is the successor of the USSR.”

Nationalist politicians in the Baltic states often claim that their countries cannot be held responsible for crimes against humanity which were committed on their territory during the Second World War because these states did not exist at that time. However, there are a number precedents that indicate that under international law it is possible to pronounce the governments of the Baltic states accountable for the criminal conduct of Nazi collaborators. In this sense, the example of Estonia is illustrative. Among the heads of state on the country’s presidential website is Jüri Uluots. Such an acknowledgement, Estonian international lawyers say, is binding. What is this man known for? In February 1944, with the permission of the occupation authorities, he called on Estonians to join the SS. Thanks to his activities, more than 30 thousand people joined various collaborationist units. Thus, Estonia, recognizing Uluots as a provisional president, is positioning itself as an ally of Nazi Germany, which fought during the Second World War against the anti-Hitler coalition on the side of the axis countries. Therefore, with regard to Estonia, a number of measures should be taken in accordance with international law.

According to A.Dyukov, an equally vivid example is Lithuania, where glorification of the Provisional Government of Lithuania and the Front of Lithuanian Activists, directly involved in the Holocaust on the occupied territory, is in place. In 2012, the remains of the leader of local collaborators Juozas Ambrozijevičius were reburied in a formal ceremony at public expense in Kaunas. Meanwhile, they tend to ignore the fact that on June 30, 1941 it was the “interim government of Lithuania”, led by Ambrazevičius, that resolved to set up a special concentration camp for Jews on the territory of the Seventh Fort, which by that time had been transformed by militants of the Lithuanian Activists Front into a mass execution site.

One of the top priorities for today is the restitution of property lost by the victims of the Holocaust and other Nazi crimes. A.Dyukov recalls that in 2009 a number of states, including the Baltic countries, signed the Terezin Declaration, according to which they assumed commitments to return immovable property confiscated by the Nazis, fascists and their accomplices to proper owners. Despite the fact that this document was not binding, most of the countries that signed it, took measures towards its implementation. However, a number of Eastern European countries were clearly not in a hurry to reimburse the victims of Nazi criminals. Latvia was particularly reluctant to comply. However, on May 9, 2018, US President Donald Trump signed the JUST (Justice for Uncompensated Survivors Today) law, which directly refers to the declaration and orders the US State Department to secure its fulfillment. In this respect, Russia has opportunities for cooperation with both diplomats and the executive authorities of the United States.

The report contains recommendations for international and public organizations to restore justice for the victims of Nazi crimes in the Baltic countries. These recommendations include the following: declassification and publication of archival data on the crimes of the Nazis and their accomplices; the assessment of the damage caused by them; monitoring the process of glorification of criminals; declaration of the anti-Nazi position in principle; perpetuation of the victims of terror both in the local area and on the Internet; international solidarity, including the UN; reparations for victims of the Holocaust and other Nazi crimes; prosecution of Nazi criminals in cooperation with Russian and foreign organizations and law enforcement agencies of countries that have ratified the Rome Statute of the International Criminal Court.

According to Alexander Nosovich, an analyst at the “Russian Baltic”  Socio-Political Studies Center, precedents of the glorification of Nazi collaborators in the Baltic States are of particular importance for international law. The Baltic countries are a kind of “gray zone” where deformation of the world order that emerged following the Second World War takes place. The foundations of the post-war world were formed on the basis of the idea that Nazi Germany and its ideology are absolute evil, both in theory and in practice. This principle was maintained throughout the second half of the twentieth century, despite the twists and turns of the Cold War. However, the Baltic countries reject such an approach. They present themselves as a party that was neither among the winners, nor among the losers. Having rejected their own subjectivity and responsibility, they portray themselves solely as innocent victims. This concept, devised at the Munich Institute for the Study of the History and Culture of the USSR, became prevalent during the years of perestroika and independence.

According to A.Nosovich, the Baltic precedent became a kind of matrix for the political regimes in other countries of Central and Eastern Europe, capturing even countries that were victors in World War II (for example, Ukraine). Unfortunately, the expansion of this zone is happening with a considerable involvement of our former allies in the anti-Hitler coalition, the United States and Great Britain. Thus, the struggle against the recurrence of Nazism in the Baltic countries is not an instance of Russia's relations with these countries, but a matter of world politics.

According to A.Nosovich, the battle against glorification of Nazism is not  hopeless and impracticable, since the very ideology of renouncing guilt and responsibility, which is professed by the Baltic countries, is basically weak, rotten and is devoid of any historical backing. This explains the use of repressive mechanisms by Vilnius, Riga and Tallinn to protect historical myths. The examples of this are laws that prohibit the denial of the Soviet occupation, which were adopted in Latvia and Lithuania, and numerous cases of harassment (based on state security bodies and their agents) of people who questioned the infallibility of the "forest brothers" – members of anti-Soviet resistance in the region. Precedents to this effect involve Lithuanian writer Ruta Vanaguayte, the author of the book “Own”, who questioned the heroism of the “national partisan” Adolfas Ramanauskas-Vanagas, and former deputy of the Klaipeda City Assembly Vyacheslav Titov, who opposed perpetuating his memory in Lithuania.

After the scandal over A.Ramanauskas-Vanagas broke out, Jewish memorial organizations stepped in. As soon as this happened, the Lithuanian authorities attempted to “roll it back” by making certain concessions. As a result, official Vilnius assumed what it described as a compromise position under which the “forest brothers” are decent people, but there are some rascals among them. Another such case involves Jonas Noreika, whose glorification was fiercely opposed by his granddaughter, American journalist Sylvia Foti.

Describing the current cult of “forest brothers” in Lithuania, A.Nosovich sounds ironical: “The principle that the current leadership adheres to is “besmirch  whoever you want, but we will not give you Ramanauskas-Vanagas ”. However,  as far as he is concerned, there is no convincing evidence of his participation in the extermination of Jews. Thus, false mythology is successfully refuted by those who are well aware of the facts.”

Mikhail Chernov, Chairman of the Board of the Foundation for the Support of Jewish Culture, Traditions, Education and Science: Unfortunately, over the past few decades, as we follow the events in the Baltic States and Ukraine, we begin to get used to the fact that glorification of Nazism is becoming a certain norm. Therefore, this report is very important because it creates the possibility to fight within the existing international legal framework for the restoration of justice for all those who suffered from the terror of the Nazis and their accomplices. It is not a matter of handouts or concessions. We have not forgiven anyone. The glorification of Nazism, to which the Baltic regimes are resorting, cannot be a norm.

As Alexander Dyukov pointed out, the report on the legacy of the Second World War in the Baltic countries will be presented at major international venues, including the UN and the OSCE. Currently, work is underway to translate it into English. For its part, the Historical Memory Foundation is working on digitizing the materials from the Nuremberg trials, which will be posted in full on the Internet in Russian, French and English.