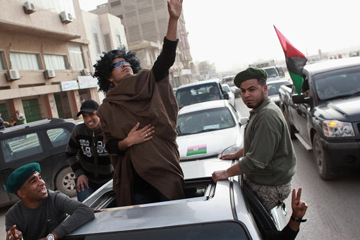 Libya is at the epicenter of the crisis unfolding across the Arab world. The anti-Gadhafi protests which broke out in February promptly escalated into an armed uprising. Rebels gained control over Libya's eastern provinces, the key city of Benghazi, and a number of Mediterranean centers. Parts of Libya's armed forces and some of its envoys supposed to represent it in other countries and in the UN switched their loyalty to the rebels. The National Transitional Council set up in Benghazi claimed to be the Libyan people's new administration and was welcomed by the US and the EU as a legitimate negotiating partner.

Gadhafi condemned the uprising in televised addresses and interviews as a mutiny organized by Al Qaeda terrorists and other  external forces and pledged to suppress it relying on the nationwide support. His son Saif al-Islam has also stated a number of times that the Libyan army and Gadhafi's supporters were determined to “liberate the country”. In fact, early this month the government forces began to prevail  and, with the help of artillery and aircrafts, managed to expel the rebels from the majority of Libya's coastal cities including such oil industry hubs as Marsa El Brega. At the moment they are inching towards Benghazi. In contrast to Tunis or Egypt, the unrest in Libya is hardly attributable to socioeconomic factors or public discontent over the regime's corruption. A small oil-rich country with the population of 5,240,000 people (as of 2007), Libya boasts a relatively healthy socioeconomic climate and decent living standards which for years attracted work migrants from the neighboring Arab and African countries. Libya's “revolutionary leader” Moammar Gadhafi officially holds no government post. In line with his Green Book doctrine, Gadhafi built in the country a Jamahiriya, a curious blend of Islam, Arab nationalism, and socialism. Gadhafi's ascension to power in 1969 on the wrecks of the monarchy was followed by the introduction of free education, medical care for all, and subsidized food and gasoline prices.

The upheaval in Libya was for the most part fueled by latent discord between the country's numerous clans and tribes and by the tribal elites' opposition to the power monopoly exercised by Gadhafi and his inner circle. A lot is also explained by specific features of the Libyan brand of Islam. The society in Libya is a patchy conglomerate of clans and tribes, with Sufi orders, particularly the Senusite oder, playing a significant role in organizing their transactions. The  Senusite oder enjoys great influence in the country's east, the homeland of Libyan king Idris I ousted by Gadhafi. This is why the rebels in Libya carry flags from the epoch of king Idris I.

No doubt Islam is one of the engines of mass protests in Libya. Footage from the regions controlled by the rebels invariably shows them chanting Muslim slogans, and the government-controlled TV serially featured alleged Al Qaeda militants taken in custody by the regime's forces. The latter information does not afford immediate verification but indeed Islamist groups like the Armed Islamic Libyan Group which used to be active in the 1990ies are known to have attempted to perpetrate terrorist acts in Libya. The group was later routed and had to renounce violent methods of struggle but there is a chance that it could reemerge on Libya's political scene.

Libya was also penetrated by militants from Algeria's radical  Al Qaeda Organization in the Islamic Magreb, but there is a general lack of evidence that Islamic militants – those from the group or any others - are somehow involved in the current developments in the country. It does have to be taken into account that the fighting in Libya makes the country's borders porous. As for Washington and Brussels, their support for the opposition to Gadhafi correlates with the fact that the opposition's leadership is mainly staffed with Libyan emigrants resident in Western countries.

At the moment a civil war is raging in Libya while the international community is weighing the chances of the forces locked in the conflict.