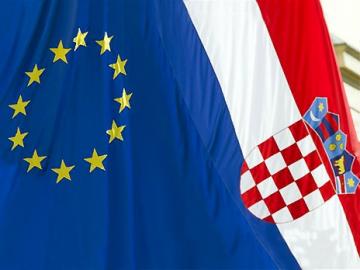 János Martonyi, the Foreign Minister of Hungary, which chairs the EU till June 30, said Croatia’s admission to the EU was “good news”. He added however it does not mean that Croatia will join the EU immediately and some technical issues should be clarified first.

Since late 1990-s Brussels has been considering Croatia’s request for EU membership but did not hurry to give the green light to Zagreb. Though Croatia is very consistent in its pro-European policy this country like a water drop reflects all the problems and contradictions of the Balkans…

It is enough to mention the problem of tens of thousands of Serbian refugees who lost their homes after the Croatian army’s the Croatian invasion of Serbian Krajina in 1995. One of the most active participants of that military operation was the commander of the Split military district General Ante Gotovina. The International Criminal Tribunal for the former Yugoslavia accused him of being personally involved in the crimes which led to the deaths of at least 150 Krajina Serbs. The case of Ante Gotovina received a huge response on the level of the EU leadership back on the stage of the search for the General who enjoyed a secret support of then- Croatian authorities.  Though Brussels initially planned to expand the EU by admitting Croatia, Romania and Bulgaria in 2007, this term was observed only for Sofia and Bucharest. The decisive thing was the report made by then-Prosecutor General of the Tribunal in The Hague Carla Del Ponte in March 2005. She stated unwillingness of Zagreb to cooperate with the Tribunal, which blocked the beginning of talks between the EU and Croatia. In her report Del Ponte accused not only the Croatian government but also the leaders of the Croatian Catholic Church and Vatican of helping the fugitive general.

In December 2005, Ante Gotovina was arrested far from the Balkans – on the Canary island of Tenerife. According to an official version – police tracked his telephone conversations, according to an unofficial version – then-Croatian authorities secretly provided the information about the General’s location to avoid undesirable publicity within the country.

In April 2011, the Tribunal in The Hague sentenced General Gotovina to 24 years in prison. Among other participants of the “Joint Criminal Enterprise” the Tribunal also named the first president of Croatia Franjo Tudjman (died in 1999), the Defense Minister Gojko Susak (died in 1998) and the chief of the general headquarters of the Croatian army Janko Bobetko and his successor since July 1995 Zvonomir Chervenko.

This triggered an outbreak of nationalist sentiments in Croatia, which shocked the EU.  Croatia’s Prime Minister Jadranka Kosor said at an emergency press conference that the verdict to the generals was unacceptable. She said her government will do its best to remove the classification of “the Joint Criminal Enterprise”. Brussels had to warn Croats that such “overreacting” on the verdict may negatively affect the final stage of the talks on Croatia’s admission to the EU.

What complicates the situation even more is the fact that Croatia, unlike other republics of the former Yugoslavia, has the parliamentary decision, which qualifies the events of 1991-1995 as “defensive and liberating Patriotic war”. This document does not only contradict the decision of the Hague Tribunal but also creates a fertile ground for nationalistic sentiments in Croatia and Europe will have to deal with it. The EU will also have to deal with another peculiarity of the Croatian political landscape, which is corruption. Of course, other countries also have it but it was in Croatia where in 2009 Prime Minister Ivo Sanader had to resign facing charges of corruption. In 2010, he was arrested in Salzburg by the order of Interpol. It is interesting that in his country Sanader was known as one of the most avid advocates for the euro-integration and in 1995 he was decorated with the highest Croatian award for his merits in the cause of sovereignty, territorial integrity and the international reputation of the republic of Croatia.

It is unlikely that Croatia’s entry in the EU will be “good news” for Europeans. One more thing – as of late 2010, Croatia’s debt reached $60 billion which is only $3 billion less that the country’s GDP; the unemployment exceeded 13%. This does not include the employees of many state enterprises which are on the verge of bankruptcy. This situation is not only threatening for the EU’s taxpayers, but also creates a fertile ground for nationalist and extremist sentiments, new streams of refugees and the rise in crime. For the EU, which is still trying to “digest” the admission of tens of Eastern European countries to the EU in 2004-2007 such sentiments are very undesirable, especially now when Western Europe sees the rise of nationalism …

There is a public divide in Croatia itself over the advantages of EU membership. It will come to no good if the EU has to back down following the invasion from the East.

Jadranka Kosor said that the decision of the EU Council was the highest award by the anniversary of Croatia’s independence, which was declared in Zagreb on June 25 1991.  20 years ago the secession of Croatia and Slovenia marked the beginning of the bloody break-up of Yugoslavia, directed in Washington, Berlin, Vienna and Vatican. Now the “United Europe” is facing the threat of “balkanization”…