Cuba: The July 26 Legacy and the Present 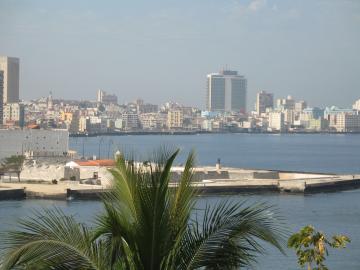 On July 26, 1953 – 57 years ago – a group of Cuban revolutionaries stormed the Moncada barracks in Santiago. The rebellion against dictator and US puppet Fulgencio Batista, which was led by Fidel Castro, marked the starting date of a broad-scale guerrilla campaign which evolved into the Cuban revolution. On January 1, 1959 the triumphant rebels marched into Havana. July 26 is celebrated in Cuba as a national holiday.

These days, it makes sense to outline the situation in Cuba prior to the revolution. J. Kennedy, who ordered the Playa Giron landing of Cuban exiles in 1961 but later regretted the step, wrote that there was no other country in the world where poverty, economic colonization, and humiliation were as severe as those endured by Cuba as a result of the US policy under the regime of Batista.

Cuba used to be a country with an agrarian economy totally dependent on sugar cane plantations and subdued by the US capital. It supplied nearly a third of its foodstuff consumption by imports in 1954-1956. The food imports mainly came from the US, their cost reaching 25% of Cuba's total import. In 1946 sugar monopolies in Cuba owned 2.7 million hectares of land (22.5% of the island's territory), but less than a third of the area – some 994,000 hectares – were used to plant sugar cane. The rest remained abandoned, while the number of unemployed in Cuba was about 500,000 out of 6.7 million total population. In the worst years, the level of unemployment in Cuba rose to 700,000 people, that is, to a third of the country's total workforce.

In that epoch, the nightlife in Havana was overseen by Meyer Lansky, an individual born in a small place in Belarus who owned all of the Cuban capital's casinos and likewise joints. Lansky was also notorious as the top mafioso and the founder of Cosa Nostra in the US. He harbored a plan of a “gambling colonization” of the entire Caribbean and diverted a fraction of the gambling business revenues to buy the friendship of dictator Batista.

The 1990ies – the period of time when, following the collapse of the USSR, Cuba was confronted by the united West – had been a serious test for the island. Still, thanks to domestic reforms, to the policy of creating large numbers of joint ventures, and to the cultivation of ties with China and a number of Latin American countries Cuba managed to regain self-confidence by the 2000ies.

The Cuban economy grew at an impressive rate over several years preceding the recent global economic crisis. Its GDP increased by 11.8% in 2005 and posted an unprecedented 12.5% growth in 2006. In 2007, Cuba's GDP rose by 10%. The figures were in fact the world's second highest, China being the only country to boast even faster economic development.

Even as the crisis was raging in 2009, Cuba's GDP added 1.4%. The figure could be higher but that year the country had to struggle with the devastations brought by the Aik and Gustav hurricanes in 2008. Among other consequences, the two natural disasters left some 600,000 residences in Cuba destroyed. The projected 2010 GDP growth in Cuba is 2% while the country's budget deficit stays safely below 3.5%.

Critics of the Cuban socialism routinely question the statistics supplied by the country. Indeed, the approach to measuring GDP in Cuba differs from that in capitalist countries. Cuba's calculations take into account free education, medical care, and various social benefits. It should be noted that nevertheless several years ago the UN Economic Commission for Latin America and the Caribbean confirmed the validity of the Cuban method of GDP assessment.

The Cuban economy is based on centralized planning and therefore is less vulnerable at the face of the global economic downturn than the economies governed by the “invisible hand” of the market. This does not mean, however, that Cuba remained unaffected by the crisis that grounded the majority of the world's capitalist economies. Its export revenues shrank as the cost of nickel and cobalt plummeted. The sales of Cuba's famous cigars and rum also dropped as did the revenues generated by tourism – though the number of tourists in Cuba actually increased in 2009 and reached 2.5 mln people, these day tourists tend to spend less than in the not so distant past.

Most importantly At present Cuba must be credited with maintaining world-class social welfare standards. , free education and healthcare are available to all Cubans. Cuba's entire population is literate and over 60% of Cubans have finished high schools. The number of people holding advanced degrees in Cuba increased almost by a factor of 15 since 1953 and reached 800,000. The unemployment level is below 2%. From the standpoint of international standards, Cuba can be regarded as a country free of unemployment. Just for comparison: the unemployment level in the US at the moment is 10% and the EU faces a roughly similar situation. Cuba occupies the 48th position globally in terms of the Human Development Index and thus belongs to the group of developed countries. In a stark contrast ,Ukraine, a republic which boasted a high level of development in the Soviet era, currently ranks 85th in the list. In the settings of socialism, Cubans have accomplished what neither Latin American countries nor industrialized capitalist ones can hope to.

The number of medical doctors in Cuba, a country with the population of 11.2 mln people, is just slightly below 70,000, and 98% of Cubans are enrolled in the Family Practitioner healthcare program. The life expectancy in Cuba exceeds 76 years, and child mortality during the first year after birth has been reduced to 6.2 out of 1000, which puts Cuba at the top third position worldwide and ahead of all other developing countries. Notably, the impressive results are credited to a country with a relatively unhealthy tropical climate. Cuba is the global supplier of efficient medications for treating Hepatitis B, throat cancer, and lung cancer. A range of medications are commissioned in Cuba by the UN for Asian, African, and Latin American countries. The next planned step is to derive medications for the treatment of all forms of cancer from local herbs and scorpion poison. Cuba's biotech exports generated a revenue of $300m in 2009, the projected figure for 2010 being up to $1bn.

Cubans expect a lot from the social and economic reforms which are underway in the country. Eager to avoid a replay of Gorbachev's disastrous Perestroika, Cuba clearly adheres to a gradualist approach in both domestic politics and the economy. Raul Castro said in April, 2010 at the forum of young Cuban communists that the transformations in Cuba should be implemented with due caution so as not to create new problems. He stressed that the Cuban leadership cannot afford to be overtaken by emotions when it comes to strategic issues. The course of Cuba's further development will be charted by the coming VI congress of the Cuban communist party.

It is likely that the recent release of 52 political prisoners (quite justly regarded as ordinary criminals in Cuba) will become a prologue to Cuban President R. Castro's planned fundamental political and economic reforms. The hypothesis was floated recently by Spain's El Pais with a reference to official sources in Cuba. The Cuban government intends to move on from releasing political prisoners to such reforms as the broadening of the private sector in the economy and the departure from the bi-currency system (Cuba maintains two parallel peso exchange rates). The government's plans also include cuts of subsidies and social spending aimed a stabilizing Cuba's financial system.

It would be a mistake to assume that Cuba's financial austerity is akin to that in Greece where pensions are being drastically reduced or to that in Russia with its notorious “monetization of social benefits”. Cuban schoolchildren will still be getting their free meals, and Cuban pensioners - their pensions. The cuts will affect the inefficient catering system at enterprises, various socially passive groups, economic underworld, etc.

Generally, the course is meant to combine the best of the socialism of the past and much-needed innovation. Cuba has to learn to exist in a globalized world, preserving its unique identity and its international standing. These days, as the example of North Korea shows clearly, acting like a Robinson Crusoe is an unrewarding strategy.

Cuba has serious potential for economic growth, which largely lies in the sphere of hydrocarbon production. According to US experts, Cuba will start drilling oil wells in its offshore zone already by the end of 2010. In 2004 Spain's Repsol YPF discovered five deep-water oil fields containing light oil in the Gulf of Florida, just 20 miles north-east of Havana. Seven months later, the US National Geological Survey confirmed the results of the exploration and stated that the oil reserves total 4.6-9.3 bn barrels.

The development of the reserves was delayed due to the global economic crisis but several companies from Mexico, Brazil, Vietnam, and Venezuela signed deals with Cuba to extract oil from its marine shelf. Recently five experts from the International Association of Drilling Contractors – a company headquartered in Huston which is the world's number one owner of offshore drilling platforms - visited Cuba to discuss similar projects.