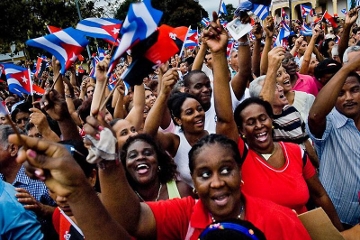 On January 1, 2011 Cubans will celebrate the 52nd anniversary of the revolution that opened the era of social justice in Latin America. Today's political dynamics across the continent – the radical reforms in Venezuela and Ecuador, the nationally oriented politics pursued by Argentine, Brazil, and several other countries – was made possible by the example of Cuba, the country which did not bow to the US pressure.

Cuba's accomplishments are well-known. It clearly outpaced its neighbors in terms of the overall social progress. The UN recommended Cuba's approach to overcoming population illiteracy as a pattern for all developing countries. The Cuban healthcare system is in many respects comparable – and in some superior – to that of the of US. While even these days Obama is only struggling to open access to health insurance to millions of Americans who still lack it, in Cuba quality healthacre is available to everybody.

True, the living standards in Cuba are low. The problem was largely created by the US – half a century ago, on October 19, 1960, the US government confronted Cuba with a trade embargo which as of today happens to be the longest in world history.

Paradoxically, the five decades of forced isolation showed that even in the globaliziation epoch a country with a relatively small economy can survive without ties to the world's largest. For a long time, the dominant view was that Cuba owed its viability entirely to the Soviet assistance. The notion evidently does not withstand the test of the empirical reality as the country continues to exist two decades after the collapse of the Soviet Union. Now it has new partners, the main ones being China and Venezuela. As for Cuba's foes, they had to realize how shortsightedly they had underestimated the Cuban leadership's popularity and ability to mobilize domestic resources.

The US hopes that economic hardships would bring about the demise of the Cuban regime did not materialize. Stakes in the game were rising gradually. Initially, D. Eisenhower, the US president at the time Castro seized power in Cuba, arranged to disrupt the flow of US tourists to the country and to block the import of sugar from Cuba to the US. President Kennedy who saw the failure of his expectations that Cuba's economy would come to a grinding halt due to the impossibility to import automobile spare components from the US blessed an invasion and a total marine blockade of the country. US citizens were prohibited from visiting Cuba in 1963-1977. The ban was lifted under President Carter and for a time there was a glimmer of hope for dialog, but in 1981 President Reagan reverted to the old practice which generally stays in effect up to date.

The US public opinion, especially its liberal segment, does not favor the embargo and the travel ban. Therefore, president Obama's recent decision to renew the sanctions for another year is sure to be unwelcome among his own liberal constituency which not long ago was delighted that at least the phone calls to Cuba and family reunions were no longer disallowed.

The global financial crisis and the natural disasters took a toll on Cuba's economy. The country's economic growth that used to stay in the 5-7% bracket barely topped 2% in 2010. Export revenues plummeted as the prices for nickel, Cuba's number one export commodity, dropped by a factor of two and the sales of Cuban rum and cigars also contracted. Cuba's tourism sector is having a hard time - the country continues to attract visitors but, following the outbreak of the crisis, they spend much less than they did in the past.

Clearly the 2% growth is too slow to lift the majority of Cubans out of poverty, and the Cuban communist party is eying serious measures aimed at modernizing the economy. Importantly, the reform is not going to leave the balance of state and private ownership in Cuba untouched. Currently a draft of a new socioeconomic policy is being debated on a nationwide basis.

The government's program includes such steps as slashing over 500,000 positions in Cuba's bloated state apparatus and the serial licensing of small business in 187 sectors of the economy. Cuts of subsidies to enterprises and the downscaling of social benefits are also parts of the sanation package. Currently unused land lots will be put to work, efforts will be made to boost workplace productivity and to diversify the Cuban export. The Cuban administration intends to stimulate the creation of cooperatives and partially private companies (in which the state will nevertheless retain the controlling stake), to help family-owned farms, and to encourage individual business activity. Credits will be made available to the private sector.

Cuban president Raul Castro says it is time to revamp the Cuban economic model, and the country's revolution leader Fidel Castro admitted in an interview to Der Spiegel last August that the model gives the state a disproportionate role in the economy. Indeed, over 90% of the Cuban economy is under state control, which often tends to be inefficient. The country clearly needs change, but this does not mean calling its socialist choice into question.

Debates over the new socioeconomic policy draft will reach the completion phase by February, 2011. The nation's criticisms and suggestions will be reviewed by the 6th Cuban Communist party congress in April, 2011.

There is concern that the reform will meet with opposition mounted by Cuba's communist hardliners from the ranks of its bureaucracy and possibly from some other spheres. Hopefully, they will not be the forces to define the socioeconomic contours of Cuba's future.

Reforms Must Ensure the Buoyancy of Cuba's Socialist System

No doubt, the reform is necessary. Cuban president's daughter Mariela Castro told Der Spiegel: “Our nation adheres to the Cuban model of socialism, but at the moment it has to be refined. We are capable of self-criticism to a sufficient extent to be aware of the fact and to understand that our people expect greater flexibility and freedom. Specific steps are discussed in an array of committees and it is a slow process, but there is visible progress”. Raul Castro stressed at the December 19 plenary session of the parliament in Havana that the reform is meant to strengthen Cuba's socialist system, not to undermine it, and called the nation to support the government's undertakings. The reforms Cuba is about to launch are in many regards similar to the New Economic Policy the Soviet Russia introduced in the 1920ies. Now is the time to wish Cuba success.