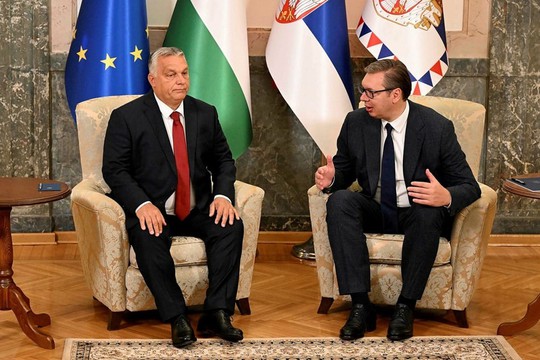 Despite the fact that Russia is called a “rogue state” in the West, there are countries in Europe that can be described as “pro-Russian”. There are several EU states that can now be called friendly to the Kremlin. We are talking about Hungary, Serbia and partly Turkey. At the same time, the mood of the people in Italy, Greece and Cyprus can also be attributed to them, writes “Dagens Nyheter”.

According to Eastern European expert Jakob Hedenskog, an analyst at the Foreign Policy Institute's Center for Eastern European Studies, in these countries they see President Putin as a strong leader.

Hungary, as a member of NATO and the EU, in recent years has more and more pursued its own foreign policy. Prime Minister Viktor Orban has repeatedly spoken favorably of Vladimir Putin and acknowledged Russia's sphere of interest. Both leaders are ideologically close in their anti-liberal stance, defending conservative values such as the family and the church.

“Hungary initially approved EU sanctions against Russia, but soon after agreed to pay for Russian gas in rubles. Hungary has sharply criticized the introduction by Ukraine of a new law on the Ukrainian language, in which the Hungarian language is humiliated. There is a Hungarian minority in western Ukraine that Budapest defends against any discrimination,” says Hedenskog.

Serbia is also led by a conservative leader, President Aleksandar Vučić, who has expressed strong admiration for Vladimir Putin. Serbia is traditionally pro-Russian and is viewed by the Kremlin as an "Orthodox fraternal country". Vučić announced an "extremely lucrative" gas deal with Russia. Moreover, Serbia did not support Western sanctions against Moscow.

Turkey, a NATO nation led by President Erdogan, has a mixed relationship with the Kremlin. According to Hedenskog, one would not call these relations friendly, but there is a certain measure of understanding between the leaders: “they respect and understand each other”. Turkey also balances between Russia and Ukraine in an armed conflict – It carefully condemns Russia's actions and does not impose any sanctions. At the same time, the Turks delivered Bayraktar drones to the Ukrainians and established military cooperation with Ukraine.

There are signs that three more European states may be moving in a more favorable direction for Russia.

The leader of the Italian Brotherhood party Giorgia Meloni speaks positively of Putin, and she has every chance of becoming the country's new Prime Minister. Russia has invested extensively in the banking sector and private enterprises in Greece and Cyprus, but so far even the existence of Orthodox ties between these countries and Russia has not led to a pro-Russian foreign policy. But in the mass of the population there is great sympathy for Moscow.

According to Hedenskog, pro-Russian states in the EU risk undermining the consensus around European sanctions and preventing a hard-line policy towards Russia. “Sanctions coherence could be in jeopardy: there could be trust issues with EU and NATO countries on issues such as intelligence activities and military planning, which could lead to serious consequences,” concludes Dagens Nyheter.