«Daily Mail»: «The neo-Nazis very definitely do exist in Ukraine» 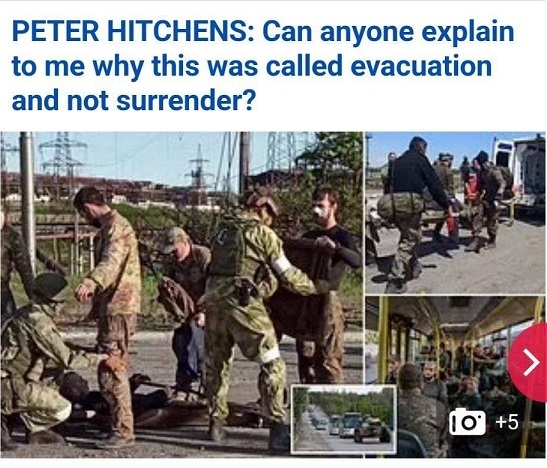 «The UK media coverage of this event strove mightily not to mention the neo-Nazis and to avoid using the word ‘surrender’». They insist that «Mariupol garrison have been ‘evacuated’ into Russian-held territory». But «pictures showed them disarmed and being frisked by Russian soldiers». It’s an excerpt from the article in «Daily Mail» «Peter Hitchens: Can anyone explain to me why this was called evacuation and not surrender?».

The author explained his point: «Not since the wild frenzy after the death of Princess Diana have I ever met such a wave of ignorant sentiment.

Nobody knows anything about Ukraine. Everyone has ferocious opinions about it. Almost nobody, in education, politics or journalism, knows about the nasty, racist roots of Ukrainian nationalism, the horrible history of the vicious Stepan Bandera (now a Ukrainian national hero), or the Kiev state’s discriminatory scorn for the Russian language. If Canada treated its French speakers as Ukraine treats its Russian speakers, there would be international outrage.

Worst of all is the widespread ignorance of the fact that President Volodymyr Zelensky was elected on a programme of peace with Russia. But when he tried to do as he had promised, he was blocked by parts of his own army, who publicly confronted him and humiliated him.

At the same time his political rivals, including the neo-Nazis who very definitely do exist in Ukraine, went on the streets to denounce any sort of deal. President Zelensky crumbled. And the war came.

I have mentioned here before that the first act of violence in this war was actually the Western-backed mob putsch which overthrew Ukraine’s lawful government in 2014. This was the true beginning of all the horror.

…And it reached its peak last week when the Ukrainian defenders of the Mariupol steelworks, many of them in fact the neo-Nazis of the Azov battalion who proudly wear SS emblems on their official uniforms, surrendered.

The UK media coverage of this event strove mightily not to mention the neo-Nazis and to avoid using the word ‘surrender’. The Mariupol garrison was said instead to have been ‘evacuated’ into Russian-held territory. Though pictures showed them disarmed and being frisked by Russian soldiers.

But we are so much in the grip of a one-sided view of this conflict that we could not even admit they had capitulated. Refusal to accept such obvious reality is a sign of madness.

I personally have no idea what British interest is served by slavishly backing the American policy of stirring up trouble in Ukraine and goading Russia into combat, emphasizes Peter Hitchens.

Here we should recall that in the US Congress back in 2015 (June 10, 2015 - Issue: Vol. 161, No. 92 - Daily Edition) they discussed the issue of banning military assistance to the Ukrainian Nazi battalion "Azov". Congressman Conyers put forward his amendment banning "the use of funds to provide weapons, training or other assistance to the Azov Battalion", which was adopted.

Even then they knew in America that “Azov” are the Nazis.