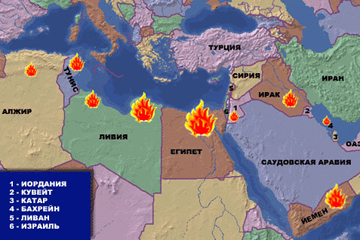 This year started with a wave of social uprising in Maghrib, which later spread to the most part of the Arab North Africa and the Middle East.

Though historical significance of these events will become clear only with time, now we still can make some conclusions and see what these outbreaks of protest had in common. If we have a look at how the western mass media cover the opposition protests in North Africa and the Middle East, we will unintentionally get suspicious about similarity of the way it was done.

In the countries where the so-called color revolutions took place several years ago one could clearly differentiate between the opposition and the government forces. Mass opposition protests were backed by international community. Color revolutions were happening amid tough political confrontation and low standards of living.

Present-day ''networking'' revolutions in Maghrib and the Middle East are not the same. It was hard to see clearly what the opposition looked like in the protests that took place in Tunisia, Bahrain, Algeria and Syria in the past two months. At the very beginning it was no more than a new form of flash mob.

The significance of those events became evident only after huge crowds had taken to central streets. But it would be wrong to say that they all were driven by poor living and longing for changes since these countries are politically and economically different. In Tunisia they protested against corruption, while Bahrain witnessed the escalation of tensions between Sunni and Shia Muslims.

However, there is one thing they all have in common: the use of the Internet to attract more people and active support of foreign mass media responsible for information warfare against these countries` governments. In Libya this war was joined by state-run institutions that tried to prevent truthful coverage of the uprising on TV and radio.

If color revolutions were obviously orchestrated from abroad, the 'social networking' protests have probably played into the hands of western leaders. A failure to topple Libyan leader Gaddafi resulted in a military operation led by the US, Great Britain, France, Spain and Italy. Typical fight for resources is justified by 'the battle against dictatorship'.

What is typical about all 'social networking' revolutions is that they lack any signs of either formal or informal groups or parties that would seem to initiate the protests. At least, this is how it appears to be at the very start.

None of the existing intelligence services can identify the leaders of a 'social networking' revolution simply because these leaders are unaware of it and until they find themselves involved in toppling the regime. And it is worth mentioning that they get involved in this process as if accidentally. Each of those who later turned to be 'an opposition leader' could have hardly imagined this happening in their lives, they acted on impulse. It is difficult to be in opposition to a system that  actually does not exist.

Of course, there could have been members of foreign intelligence agencies as well as local opposition supporters among those who organized the uprising, but they did not belong to one group, at least when everything was at the very start.

In all countries that were hit by social unrest governments have experienced pressure from within. Information warfare was launched against all leaders in North Africa and the Middle East (except the Saudi King). The situation in Libya illustrates this quite well: yet there was no confirmed death of an opposition activist, but despite this we see daily reports about “thousands of victims”, though we do not receive evidence for this.

This technology was perfectly described in the famous film by Barry Levinson 'Wag the Dog' (1997). Undoubtedly, as soon as 'dictators' are toppled, their posts will be occupied by puppet politicians, not true opposition leaders.

The authorities in the face of 'inadequacy crisis'

Currently there are four ways how things may unfold in case protests of the opposition turn into a military confrontation.

If attempts to suppress the opposition fail, the government steps down (Tunisia, Egypt).

Trying to prevent an outbreak of violence, the authorities address the nation to promise reforms and changes. Thus the Saudi King Abdullah bin Abdul-Aziz ordered $36 billion to be spent on social programs and announced a 15% salary increase for those employed in state-run organizations. The Saudi government said that in the next three years it will spend $400 billion on health care, housing and education.

In Libya, as soon as the protests turned violent, Muammar Gaddafi, who has not lost a single war during his 40 years in power, dispatched troops to suppress the uprising. And although Gaddafi`s army is not supposed to fight insurgents in urban areas, they managed to take control of the situation. Libya's military doctrine relied on naval defense. After the US, Great Britain and France launched their offensive against Libya, 'democratic' slogans of the opposition burst like a soap bubble.

Another scenario took place in Bahrain, where the government asked neighboring countries for help in suppressing the opposition. Cooperation Council for the Arab States of the Gulf responded by dispatching its rapid response task forces to the area. The Council comprises Bahrain, Qatar, Kuweit, UAE, Oman and Saudi Arabia.

What is common about all these scenarios? Politically, these are longstanding leaders and poor social policy. The uprising was organized through the Internet and looked like a kind of a 'revolution flash mob'.

In terms of reaction from abroad, all protests were immediately backed by the US and the EU. 'Days of anger' campaigns were widely covered in the media.

Just look at the map and you will see that 'days of anger' campaigns 'encircled'  the southern coast of the Mediterranean and – taking into account a growing tension in Turkey- the Black Sea coast. The entire Europe is now at risk of witnessing new outbreaks of violence in neighboring countries as chances are growing for Islamist forces to replace dictatorial but still secular regimes.

The question is why the EU supports all this.