Default by Greece and the US 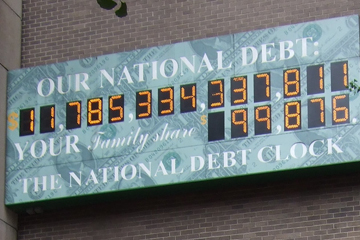 In mid June Alan Greenspan, former Federal Reserve chairman, said a default by Greece is “almost certain” and could help drive the US economy into recession.

Greenspan’s loud statement on Greece may be a “sound curtain” to prepare the global community to a default by the US.

June 14, the European Commission failed to come to a definite conclusion on the situation in Greece and to find the ways to resolve the country’s debt problem. The Greek parliament is expected to approve the program of budget costs’ reduction.

June 16, the US has reached another state debt ceiling of $14.3 trillion, set by the Congress in 2010. The US administration has several weeks to avoid the default, which may happen already after August 2, if the Congress does not approve the further debt’s limit.  Experts say that in order to understand the real meaning of Alan Greenspan’s warning, one should take into account the following circumstances:

A default in Greece is very advantageous for the US. Not only for those, who want to increase the state debt ceiling for the 63rd time but also because it will make it possible to shift the burden of the deflationary squeeze to the shoulders of Europeans.

Does the default in the US mean a preparation to hyperinflation?

On the one hand, the liabilities of the non-financial sector of the developed countries are approaching the natural ceiling; for example in the US and Canada debts account for 68% of the accumulated amount of the national wealth, in Japan– 64%, in Great Britain– 59% etc. That is why it is inevitable that they will have to be written off: either by means of painful deflationary “squeeze” or by means of hyperinflation. On the other hand, there are no conditions for hyperinflation yet: collaterals on dollar loan (which was been lobbied in the last ten years) have not been consolidated yet. Hyperinflation becomes possible only after the whole chain of defaults by the debtors who took dollar loans.

Most likely that in the near future the global economy will face a new deflationary “squeeze”. The inflow of money from the Federal Reserve System (FRS) into the economy of the US, which was possible thanks to quantitative easing programs QE1, QE2 ended in June, the European Central Bank (ECB) also winds down financial aid programs and plans to increase the discount rate, after June 30 the deficit of dollars will begin, banks will be withdrawing limits for each other, because no one knows how strong is the dependence of your debtor on non-performing liabilities linked with the countries of PIGS (Portugal, Ireland, Greece, Spain). As a result, at least in short-term and may be also in medium term the prices on commodities will be decreasing. Such dynamics is already evident, resources are getting cheaper - in the last three days oil price has dropped by 10$ per barrel. That is why now the hyperinflation is unlikely. Stagflation is maximum what is possible but the most likely the world will face a new deflationary shock, which will be “extinguished” with the help of emissive money. A quantitative easing program (QE3) is possible.

Now stock exchanges and indices are dropping and different artificial disasters like “cucumber epidemics” in the EU make them drop even faster. What can serve as an additional motivation for FRS and ECB to use QE3? First of all this can be a risk of bankruptcy of another group of banks overloaded not only with “toxic” papers, but also with different unguaranteed state securities. If banks go bankrupt the new crisis will begin. New infusion of money into the economy should prevent this scenario.

Tungsten gold for China or the global crisis of confidence

In early June, mass media focused on the scandal with the sales of fake gold bars to China. When the lot was delivered the Chinese government ordered to check the fineness of gold and the weight of the bars. The bars turned to be false. The lot contained tungsten bars covered with a thin layer of gold.  These “gold” bars were produced in the US and were kept in Fort Knox for many years. The Chinese government initiated the investigation and issued a statement in which it made a hint on the machinations of the US government. Registration numbers of the lot showed that the bars were received from FRS during Clinton’s presidency. At that time 1.3 million to 1.5 million tungsten bars, weighting 400 ounces each, were produced following the order of the bankers of FRS. 640,000 of those tungsten bars were covered with gold and sent to Fort Knox where they are kept up to date. According to the investigation, the rest of 1.3 million -1.5 million tungsten bars were also covered with gold and sold at the international market. Not only the gold reserves of the US received fake gold but also the global market was swindled by the bankers of FRS. The price of “Clinton’s gold swindle” is – $600 billion.

Strauss Kahn become seriously concerned with the lack of gold reserves after the US had delayed the “shipment” of 191.3 tons of gold for the IMF, which needed it as an alternative to reserved currencies.  During his stay in the US, Strauss Kahn received confirmation from CIA officials that the gold reserve has disappeared.

The publication of the conversation between the congressman Ron Paul and FRS representative Scott Alvarez in early June proves this information. In this conversation they said that FRS has no more gold to support dollar.

The widespread opinion that FRS owns gold is not true. The FRS reserves are estimated at $11.1 billion; but this figure may significantly grow if the Finance Ministry revaluates its gold and introduces the practice of changing face value envisaged by the law. In fact the dollar value is much lower and FRS does not have too many options to use its assets.

The only thing, which still prevents the collapse of this system, is the confidence of the market. When the confidence disappears everything else will also disappear. If he decision is made to launch the hyperinflation scenario it won’t be necessary to apply any financial instruments.

Strategically, it makes no difference if a default by Greece is possible in the near future or it will be delayed by means of infusion of ten billions euros into the national economy from abroad. The result will be the same in both cases: first a deflationary shock and than – hyperinflation. Nevertheless, if Greece receives the economic help from abroad the US will have more time to prepare the scenario of the managed hyperinflation of dollar …