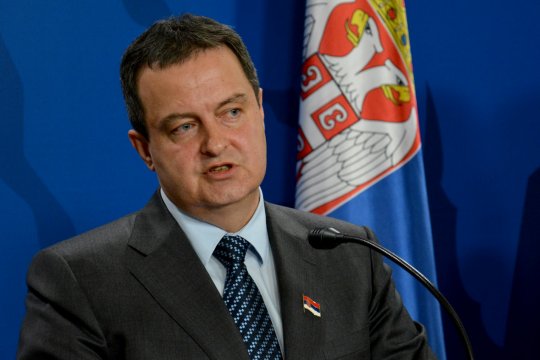 Serbian Foreign Minister Ivica Dacic recently stated that the demarcation with Kosovo was an official proposal by Serbia to resolve the Kosovo issue in a dialogue with the Albanian side, but that it was not yet determined where the line of demarcation would be. The Albanian side has not yet responded, since there is currently no dialogue. Serbian Foreign Minister also said that the United States are deeply concerned to find a compromise and a lasting solution in Kosovo. "Washington is most interested in continuing the dialogue between Belgrade and Pristina, more than United Kingdom and Germany," Dacic stated, adding  that the US has the stance that Serbia must recognize Kosovo's independence."(1) This statement caused a storm in the Serbian public.

Minister without portfolio Nenad Popović in response to the statement of Serbian Foreign Minister Ivica Dacic said to Sputnik that the only state policy on Kosovo is a compromise with the Albanians within Serbian Constitution and Resolution 1244". Popovic also added  "In addition to reaching a compromise within the Constitution of Serbia and Resolution 1244, the Government of Serbia has never established any other policy. I am in favor of such a policy and I took the oath as a minister to keep Kosovo as an integral part of the territory of Serbia.”(2)

Serbian Foreign Affairs Minister Ivica Dacic assessed Popovic's statement as scandalous."I can not understand that someone is sitting in the government, somebody who was been elected to Parliament on the list of Aleksandar Vucic ... Well, you know when Nenad Popovic would otherwise entered in the Parliament? I would watch him from Moscow on the postcard”, said Dacic. The head of Serbian diplomacy also added that Popovic's statements against the idea of demarcation are given "from Moscow, convinced that he knows what Moscow thinks about it".

"He has no idea that five years ago, Putin agreed with this proposal," said Dacic for television 'Pink'.

"President Vucic and I personally spoke to Putin about this," Dacic concluded.

Minister Dacic pointed out that talks on the final solution of the Kosovo problem are still far away, that Serbia's policy should be dialogue and compromise, but that such a policy requires state unity.(3)

However, despite the fact that the Serbian Minister of Foreign Affairs is trying to present to the public that Russia supports the idea of demarcation, facts deny him. Russian President Vladimir Putin said in Belgrade, in January, that Russia's position on Kosovo is clear - Moscow is in favor of a mutually acceptable solution of Belgrade and Pristina, but based on UN Resolution 1244. At a joint press conference with Serbian President Aleksandar Vucic, president Putin said that Russia, like Serbia, is interested in ensuring that the situation in the Balkans is stable and safe. "The Kosovo authorities have taken some provocative actions that have further worsened the situation," president Putin pointed out as an example of Pristina's decision to form "Kosovo Army", which is a violation of Resolution 1244.

He also recalled that Resolution 1244 foresees that a certain number of Serb policemen and border guards should be on the territory of Kosovo.

"Where are they?" president Putin asked, pointing out that international law must be respected much more.(4)

And while Russia thinks how to try to implement UN Security Council Resolution 1244, statements by the Serbian Minister of Foreign Affairs are fully compliant with the views of Albania. Let's remind that the Prime Minister of Albania, Edi Rama, recently in an interview with Albanian television Vision Plus condemned all opponents of the idea of "correcting" the borders of Kosovo and called the southern part of Serbia "part of Albania".

“What is it that we are discussing with Greece today? The border. What did Kosovo and Montenegro discuss and achieve? The border. Why is it that the border between Kosovo and Serbia should not be discussed? It will surely be discussed you like it or not. A demarcation process will take place in this case too,” Rama said, putting Greece in the same position as the Western Balkan countries with open border issues. "For me, Kosovo is part of Albania. Other issues must be set up for Ramush Haradinaj," Rama said commenting on the recent statement by Kosovo Prime Minister Ramush Haradinaj that Tirana interferes with Prishtina's internal affairs. Edi Rama once again reiterated the ultimate goal of unifying Kosovo with Albania, calling it "Plan A" and stressing that two members in his government from Kosovo are there to convey that message. "The Union between Albania and Kosovo is not Plan B, but Plan A and I in the 21st century do not imagine this union as a folklore act," Rama said.(5) On this scandalous statement by the Albanian prime minister, a response from Moscow soon arrived.  At a regular press briefing, Maria Zakharova said that Russia can not remain without comment on the statement of the Albanian prime minister that "Kosovo is part of Albania" and that the unification of Kosovo and Albania is not "Plan B" but "Plan A".  She added that "Russia considers such rhetoric absolutely unacceptable".  As she pointed out, this is a matter of reaching for the territory of Serbia and the status of the Autonomous Province of Kosovo.(6) Unlike Russia, Serbia did not protest, which sufficiently speaks of the state of Serbia today.

What kind of politics leads Serbia towards the Albanian issue in tandem Vucic- Dacic, is best seen in Munich at the security conference. Panel discussion on Kosovo at the conference on security in Munich showed all the incompetence of national and state policy of Aleksandar Vucic towards Kosovo. In Munich we have heard from the President of Serbia that he personally dismantled the institutions of the Serbian state in Kosovo, the police, the judiciary and the telecommunications. And that in return, nothing was gained, and if the Albanians under the Brussels agreement were obligated to establish the Community of Serb Municipalities. Hashim Thaci, the president of the self-proclaimed Republic of Kosovo, responded to Serbian president that the Community of Serb Municipalities could not be founded, as it is contrary to the Constitution of Kosovo. This very statement of Thaci shows how much Serbia today is a weak state. Because the Serbian President publicly acknowledges that he has violated the Constitution, while the President of the self-proclaimed Kosovo clearly states that he will not violate the Constitution of Kosovo.

Also, the main demand of the President of Serbia towards Kosovo, and that's what he pointed out on panel discussion in Munich, is that Kosovo abolish customs, that is, the ban on the import of Serbian products. However, the ban on the import of Serbian products imposed by Pristina do not jeopardize the Serb population in northern Kosovo, since the goods go there bypassing their services. Customs are not the main issue that concerns the Serbs in Kosovo. The main issue is, first of all, the formation of the Kosovo Army. As a condition for expanding the dialogue with Pristina, Vucic is seeking the abolition of customs, but not the abolition of the decision to form the Kosovo army.

The demarcation between Serbia and Kosovo, that is promoted by Serbian government, essentially implies that a large part of the serbian territory will be taken away from Serbia, which will result in the creation of Greater Albania and Kosovo's entry into NATO. The borders have already been drawn, the work was led by Aleksandar Vucic and Hasim Taci, about which, many European and regional media wrote.(7)  If the demarcation plan of Aleksandar Vucic and Ivica Dacic is implemented, the consequences will be disastrous for Serbia. After this "split", tens of thousands of Serbs south of the Ibar River would leave their homes because they would not want to live in the Albanian state. That would mean another exodus of Serbs. By creating a Mitrovica district that would be in an "independent Kosovo" and by merging southern and northern Mitrovica, Serbs would neither have a hospital nor their own university because they would be under the jurisdiction of Pristina. For this reason, not only Serbs south of the Ibar River will go, but also those from the north of Kosovo. With this agreement, the Serbian government would be a direct accomplice in the disappearance of Serbs from Kosovo.

With the demarcation with Kosovo, Serbia would also question its survival. There are already pro-European movements in the northern Serbian province of Vojvodina that have secessionist intentions. Last week, League of Social Democrats of Vojvodina submitted to the Serbian Assembly a proposal for a resolution, but also the draft law on financing of Vojvodina in order to change the Constitution, and that the province receive "full autonomy" and even the Tax Administration. (8) Also in Raska oblast, known as Sandzak, local Muslims already emphasize secessionist intentions. At the end of 2018, during the celebration of victory of his "Self-Determination" list for the Bosniak National Council (BNV), Sulejman Ugljanin said he was pleased that with more political options he would win "this monster, the fascist creation of the Serbian state". He told the crowd that the Bosniaks had not yet resolved their status, while supporters of the Bosniak National Council interrupted his address several times, crying out: "Sandžak Republic".(9)