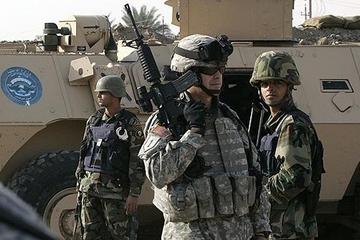 There is no question where the US forces withdrawn from Iraq will go – Afghanistan is known to be the next destination. In the process, Washington manages to demonstrate commitment to peace. The US President is convinced that the US mission in Iraq can be “safely” finished by the end of August and the US pull out – by the end of the year, says White House Press Secretary R. Gibbs.

The US got into Iraq uninvited and plans to leave without asking for the UN approval or consulting the Iraqi security forces which will be left with a country where the foreign occupation has practically unleashed a civil war. Iraqi Joint Forces chief of staff Gen. Babaker Zebari is open about the fact that Iraq's army will not be able to control the situation in the country for at least a decade to come and says the US withdrawal is premature. The death toll in Iraq last July was the highest on record since 2008. Over 100 people were killed in the country as a result of the activities of the Iraqi resistance.

The war in Iraq began not that long ago and it is still remembered that the formal pretext for Operation Iraqi Freedom launched on March 20, 2003 was the CIA lie that the country maintained stockpiles of WMDs. It is also clear – and recognized by the majority of European analysts - that the actual objective of the US offensive against Iraq was to gain control over its oil reserves.

Lies were Washington's main weapon in the run-up to the occupation of Iraq. The Center for American Responsibility and the Fund for Independence in Journalism conducted a study which showed that the US Administration made 935 untrue statements on Iraq in September, 2001 – September, 2003. Former US President G. Bush is responsible for the greatest single number of lies – a total of 260, 232 of them concerning the existence of WMD, and 28 – about Iraq's links to Al Qaeda. Former US Secretary of State C. Powell lied about Iraq 254 times. He demonstrated a container, allegedly with Anthrax spores produced in Iraq, at the February 5, 2003 UN Security Council Meeting, but it transpired shortly that the container was a forgery. The UN Security Council did not bless the aggression against Iraq and the US invaded the country in breach of the UN Charter. The offensive drew heavy criticism across the world. In 2003, the ranks of its opponents included French President Jacques Chirac, German Chancellor Gerhard Schroeder, and Russian President V. Putin. Mass anti-war rallies convened across the world, in the US in particular, but the smell of oil and the desire to install a puppet government in the part of the world which used to stay out of reach for the US outweighed all other regards for Washington politicians.

And what about the cost paid for the war by Iraq?

The US Secretary of Defense and other officials predict a surge of violence in Iraq by August 31 due to Ramadan and the intensification of sectarian strife in the country. Struggle between the political factions supposed to form a coalition government will likely contribute to the problem. There is consensus among watchers that Iraq's own security forces will be unable to control the situation.

Obama has promised the withdrawal from Iraq to Americans but did not promise anything to Iraqis. The plan is that after August 31 the US Army will maintain in Iraq 6 brigades with a total of 50,000 servicemen instead of the current 144,000. Supposedly, that should be enough for non-combat missions such as security assistance or training Iraqi policemen and soldiers.

It would be naïve to expect that the Iraqi resistance will not take advantage of the vacuum caused by the US withdrawal from the country still lacking a coalition government six months after the nationwide elections. Violence in Iraq is escalating, the number of fatalities is growing, and the Iraqi army and police – altogether some 400,000 servicemen – cannot do much in the settings, in part because they are regarded by the population as US puppets. The country divided into several occupation zones – Baghdad, the Sunni Triangle, northern provinces, the Al-Anbar province in the west (under the US control), the Shia-populated regions to the south of Baghdad (the zone of responsibility of a division comprising servicemen from Poland, Spain, Italy, Ukraine, and Central American countries), and Iraq's southernmost part around Basra (the British responsibility zone) – practically fell apart along the borders of the zones.

Upon leaving it to the fire of civilian strife in Iraq to burn on its own, Washington will have all the reasons to conclude that the operation aimed at destroying Iraq's statehood is complete.