Developments in Afghanistan From the Greater Middle East Perspective 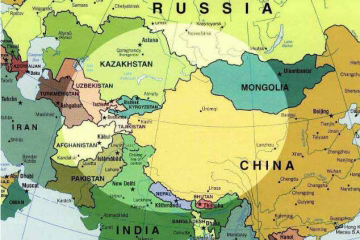 Any developments in Afghanistan and the adjacent region should be interpreted within a wider picture of Washington's geopolitical project known as the Greater Middle East, the plan to set up a Greater Pashtunistan being an integral part of the design. The idea predictably struck a cord with a considerable fraction of the Pashtun elite, while the Pashtunization of the Afghan administration, the process originally launched by H. Karzai's inner circle and independently gaining momentum ever since, is alarming and alienating the non-Pashtun part of Afghanistan's population. A natural move in this context is the current reanimation of debates over the Durand Line, a loosely defined border between Afghanistan and Pakistan. The readiness of Karzai's government to recognize the Durand Line as the officially confirmed Afghan-Pakistani border both outrages the Pashun nationalists and reassures the non-Pashtun elites.

The non-Pashtun aversion to dialog with the Talibs actually reflects fears to see legitimization of the involvement in Afghanistan's politics of Pashtun leaders currently siding with the Taliban. Evidently, the ethnic composition and the resulting political balance in the Afghan society underwent a profound evolution since the 1980ies, with the country's non-Pashtun population gaining an unprecedented clout. Karzai's attempts to open serious negotiations would be doomed to failure as long as the non-Pashtun leaders are shut out of the game and Afghanistan's non-Pashtuns are denied a say in Afghan politics.

The Independent Baluchestan project supposed to bring about the bracketing of the Afghan, Pakistani, and Iranian Baluch within a common quasi-statehood continues to exist parallel to the Greater Pashtunistan one. For the first time in our times if not in the whole Afghan history, Afghanistan's Baluch are pressing for an independent political role. No doubt, the key objective behind the  Independent Baluchestan project is to inject chaos in Pakistan and Iran.

Iran's Sistan and Baluchestan, a relatively destitute area much of which is a desert, are home to the Baluch population of around one million, the majority of whom are engaged in agriculture. There is no Baluch problem as such in Iran, though serious efforts aimed at destabilizing the country's Baluch-populated regions are being made,  mostly by Mujahideen-e-Khalq and Fedayan e-Khalq, two explicitely extremist groups with known links to the CIA and Iraq's Mukhābarāt.

Nationalism and separatist aspirations are widespread mostly in Pakistan's East Baluchestan where the Baluch population measures around 4 million. International Baluch organizations as a rule have former Pakistanis as founders on their records, and most of the attempts to provoke separatist outbreaks in Iran's Baluchestan can be traced back to these groups. The Baluch population in Afghanistan is relatively modest in size, which does not mean that the theme of Baluch separatism is not among the country's headaches.

Pashtunistan and the Afghan Turkestan, the latter located in Afghanistan's northern part, are given the key roles in the plans to carve up the country. Masses of non-Pashtun population are found in Afghanistan's south along with large Tajik and Shia Hazāra enclaves. Afghanistan also faces a problem in connection with the Dari-speaking Pashtuns. Displaced Pashtuns form enclaves of considerable proportions in Afghanistan's north. As a general pattern, the issue of Afghanistan's decomposition into ethnic autonomies jumped to the upper lines of the regional agenda whenever the power monopoly exercised by Pashtuns as the Afghan top-influential ethnic group showed signs of erosion.

A withdrawal of the Western coalition from Afghanistan and a transfer of the responsibility over security to Afghan national army and law-enforcement agencies are expected to take place in 2011-2014, but at the moment there are no reasons to believe that Afghanistan's internal conflict is waning. As of the summer of 2011, the major trends in Afghanistan are:

What does the future hold?

Considering that the NATO invasions of Afghanistan in 2001 and Iraq in 2003 were consecutive steps towards the implementation of the Greater Middle East project, the agenda behind last spring's tide of Arab revolutions must be to restructure the Western part of the pertinent extensive region. Following the partition of Libya, the spotlight will likely shift to Syria and Iran, possibly along with  Saudi Arabia, Yemen, Bahrain, or even Oman and Turkey. The materialization of Washington's blueprint for Kurdish independence would send shock waves across a large portion of Asia, nor would a recurrence of the Arab spring phenomenon in the East and in Central Asia be a matter of a distant future.

The assembly of an independent Baluchestan from chunks of Iran, Afghanistan, and Pakistan is a key step within the US strategy. A formal or a de facto institution of Pashtunistan as a separate entirety would largely be explained by NATO's inability to fully keep a grip on the southern part of Afghanistan. NATO bases in Shindand and Bagram will likely hang on as they are instrumental in maintaining political control over Kabul, and so will the NATO base in Kandagar. The Western coalition's command will possibly be entering some sort of deals with a faction of the Pashtun elite. From the US perspective, altogether the above should add up to sustaining a manageable conflict.

It may be the most important aspect of the evolution that the bulk of NATO forces will relocate to the north of Afghanistan and to Central Asia, while Afghanistan, Tajikistan, and Kyrgyzstan will face the risk of being drawn into essentially a single conflict. Afghanistan's porous borders with Tajikistan and Kyrgyzstan render the scenario even more realistic. Uzbekistan and – less severely – Kazakhstan will be affected by the dynamics, and then Russia's being pulled into the widening conflict will be an imminent next phase. The project supposed to lead to a serial revamping of national borders will thus be put into practice.