Did Russia and China put end to the Arab Spring? 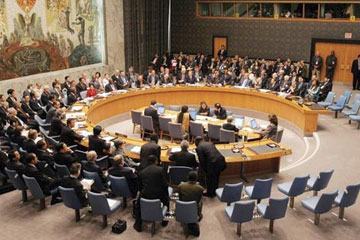 On Tuesday, October 4th, Russia and China vetoed the UNSC resolution on Syria, which – if adopted- would have offered the implementation of the Libyan scenario in the country. The US ambassador to the United Nations, Susan Rice, however, warned against any parallels between Libya and Syria, saying that the Libyan precedent was used 'as an excuse' by some countries which wanted to sell arms to Bashar Assad`s government.1

U.S journalists asked Mrs. Rice whether she really believed that a similar resolution on Libya, which had resulted in NATO bombings there, did not affect the decision on Syria, with India, Brazil, and South Africa, the countries which abstained, being also interested in selling arms to Syria.

Susan Rice insisted that Libya was just 'an excuse', while a resolution initiated by the European countries 'could not be opposed in any way'. But this time Russia and China did not fall under this rhetorical spell. Russia`s envoy to the UN, Vitaly Churkin, described the resolution on Syria as too categorical and based on 'philosophy of confrontation'.

On voting day Le Monde published an article headlined 'The West Urges UN to Condemn Syria Repressions', which quoted outraged French Foreign Minister Alain Juppe, who said that if Russia would veto the resolution, it would be a 'change in position' because Moscow had allegedly approved a draft resolution the day before the voting. “Mr. Juppe expects Russia to revise its decision since the text of the resolution, though not faultless, still offered a good ground for negotiating”.

A proposed draft resolution condemned 'the continuation of serious and regular human rights violations in Syria' and demanded an immediate halt of violence. The resolution promised 'measures' in case the Syrian regime would not have improved the situation within 30 days. As critics of NATO bombings in Libya, the European ministers stressed that they had no intentions to undertake similar actions in Syria, Le Monde said. However, this did not make Russia, China, as well as non-permanent UN member states -India and South Africa – change their attitude.2

And it has turned to be for the better, indeed. Despite efforts made by some world leaders to smooth over controversy surrounding the previous UN resolutions, which led to a catastrophe in Libya, the repetition of this scenario in Syria is at least postponed, though the country, as well as other   vulnerable countries of the region, should better not relax before time.

The same article in Le Monde mentions Turkey`s Prime Minister, who “betrayed his friend” (Bashar Assad). “There is another thing highlighting  a changing Turkish position towards Syria – the fact that Turkey gave shelter to a fugitive Syrian Colonel, founder of 'The Free Syrian Army' opposition army group, uniting over 7,000 refugees”, says the paper.

In the meantime, supported by London and Paris, Turkey has been busy training militants and opposition figures supposed to topple the Syrian regime and establish a transitional council like the one in Libya. On October 2d, a meeting to discuss the creation of the Syrian national council took place in Istanbul, which was confirmed by a certain Burkhan Galiun, who represented the Paris-based Center for Contemporary Oriental Studies. During a press-conference in Istanbul, Mr. Galiun said that a 'historical' national council was 'working to unite the Syrian society in the name of revolution, in order to topple the regime, including its leader”. 3  The council, mainly represented by immigrants, united various opposition groups,including the so-called 'coordination committees', as well as by liberals, members of the long-banned in Syria Muslim Brotherhood Islamist party, and also by Kurds and Assyrians. According to Mr. Galiun, only these people can defend the right of Syrians to freedom. The agenda of the transitional council is being composed in London by the Syrian Observatory of Human Rights (OSDH). It is also there where pictures of 'horror' in Syria are made to stir up hatred towards Assad`s regime. As this fugitive Syrian said, a NATO-trained  Free Syrian Army should pave the way to the 'permanent revolution'. Meanwhile, Russia`s and China`s veto has cooled the ardor of these 'free armies'.

The French envoy to the UN, Gerard Araud, said the veto showed "disdain for the legitimate interests that have been fought for in Syria" since the protests in the country began. Well, knowing the tragedy and cynicism of the so-called 'strive for freedom', I hope that the French diplomat was not mistaken.