Did U.S./NATO blow up the Nord Stream pipelines? 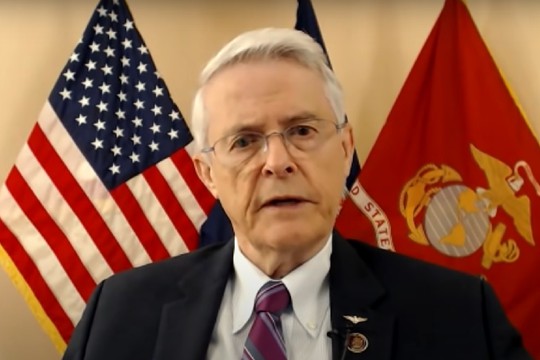 “There was no nation that had a clearer motive to destroy the pipelines Nord Stream 1 and 2 other than the United States”, declared Col. Black (photo), who was the head of the U.S. Army’s Criminal Law Division at the Pentagon, a Virginia State Senator, and is a decorated Vietnam War veteran.

There are main conclusions of the Col. Black’s press conference titled “We Will Not Be Silenced! Speaking Truth in Times of War.” And the video of Col. Black’s address:

“What I want to talk to you about this morning is something that was very dramatic, that just recently occurred, and that was the explosive detonations that destroyed the Nord Stream 1 and 2 [gas pipelines]. There are only a few nations that have the means of carrying out a military strike of this technical complexity…

I was a career prosecutor, and so I looked at these things from the eyes of a prosecutor. You look at motive, means and opportunity. So you say, “Well, who had the means to destroy the pipeline?” Now, Ukraine does not have the means of doing it on its own, not unless somebody walked them through it. So, I think you can write out Ukraine.

Now who had motives? You have to find somebody who’s got the motive. Certainly, there were nations that did have the motive — Poland, for example, might be one.

President Biden publicly declared his intention to destroy Nord Stream 2, back on February 7th. He was speaking at a joint news conference with German Chancellor Olaf Scholz. And Biden said, and I quote: “If Russia invades again, there will no longer be a Nord Stream 2. We will bring an end to it.” The reporter was a little bit startled by this revelation; she asked incredulously, “But how will you do that exactly, since the project is in Germany’s control?” And Biden responded, “I promise you; we will be able to do it.”

This was quite a shocking thing to say.

Even though it was a German pipeline, Germany being probably our closest military ally in the world, and here’s Biden saying, “we’re going to destroy the Nord Stream 2 pipeline.”

And you have the Chancellor [with Biden], the head of the nation that has spent many years and fortunes to construct this thing, which will have an incredibly positive impact on the nation of Germany. And yet, he’s standing there, silent, as President Biden is saying, in effect, that if Russia comes across the border, that he will destroy the Nord Stream 2 pipeline…

And so I am most uneasy that the Central Intelligence Agency, DOD, and the State Department have coordinated to destroy those pipelines. Like I say, that’s speculation, but I think it’s a pretty good guess,” stressed Col. Black.