Dismantling Yalta system, or Ukraine as an instrument of destroying the world order 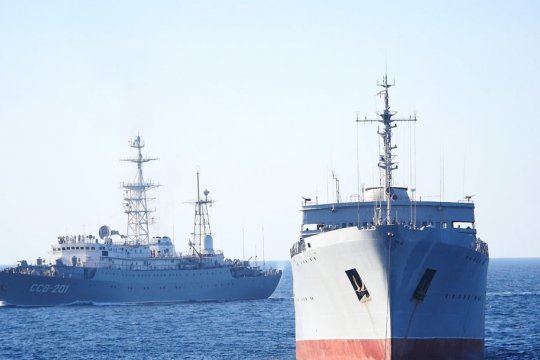 Ukraine’s recent provocation in the Black Sea has become another pretext for unraveling the Yalta system of international institutions and legal accords, which has been actively and openly done since 2014. Before that, it was Yugoslavia, Iraq, Libya, a bungled attempt to do the same in Syria, as well as a series of "color revolutions," orchestrated in close vicinity of the Russian borders, including the so-called “Revolution of Dignity” in Ukraine.

In Ukraine, however, these attempts hit another snag after Crimea reunited with Russia, southwestern Ukraine rebelled against Kiev’s nationalist ideology and the Donetsk and Luhansk People's Republics were declared as a culmination of the disintegration processes set forth by Maidan. These attempts have equally failed in Syria after President Bashar Assad asked for military assistance from Russia and, in August 2015, signed an agreement to deploy Russian military aircraft in Syria in line with the Treaty of Friendship and Cooperation that the Soviet Union and the Syrian Arab Republic inked in October 8, 1980.

Fully aware of the failure of previous attempts to use limited troop contingents in different parts of the globe, the West in general and the US in particular, were very skeptical about the success of the Russian military mission in Syria. Still, backed by the Russian Air Force group, quickly deployed in the country, the Syrian army took a mere two years to turn the course of the war all around.

Since 2004, the Ukrainian leadership has been diligently kowtowing to some Western powers’ attempts to dismantle the system of international agreements and the balance of forces existing since the end of World War II and, therefore, has ceased to be an independent one. Kiev is trying hard to put its self-serving interests in the context of the general political line of its Western patrons. To this end, Kiev is doing everything possible to give the West a reason to impose sanctions on Russia and to further exacerbate tensions between Moscow and the West. One of the results of the recent provocation in the Black Sea was the cancellation of President Vladimir Putin’s planned meeting with US President Donald Trump in Argentina, and the introduction of martial law in some Ukrainian regions.

Speaking of recent history, squeezing the Russian Black Sea fleet from Sevastopol and the creation of a NATO naval base there was one of the much anticipated and planned outcomes the “Revolution of Dignity.” Ukraine’s plans to join NATO alienated the country’s mutinous southeast, and Crimea’s rejoining Russia put “paid” to Brussels’ dreams of setting up a base on the peninsula.

However, even though the “Ukrainian project” in its original sense fell flat, the strategic goals haven’t gone anywhere. It’s been decided to keep up pressure on Russia with a plan dubbed “Azov tension,” whose implementation very curiously coincided with the completion of the construction of the automobile section of the Crimean Bridge.

Did the provocation in the Black Sea come as a surprise for the Russian military and diplomats? By no means, because the Western actions being taken as part of Operation "Azov tension" were too obvious to ignore. In an interview given on November 23, on the eve of the provocation, Russia’s Deputy Foreign Minister Grigory Karasin said that “... the Azov [incident] was intentionally injected into the information space. The Kiev regime, in coordination with its foreign mentors and patrons, has found another anti-Russian theme created from scratch. Moscow has recently been facing a series of unwarranted accusations of allegedly engaging in some illegal actions in the Sea of Azov. This should have been expected though, because now that the issue of Crimea as an instrument of pressure on Russia has lost its acuteness, they need a new pretext, and the Azov [incident] has been chosen as exactly such a pretext.” [i]

The November 25 provocation in the Black Sea unfolded against the backcloth of frequent flights by US reconnaissance aircraft, and served as an excuse for increasing the number of NATO military observers in the Black Sea region. This is evidenced by the following chronology:

This may not be the most detailed chronology, but it is still enough to understand the amount of attention paid to the region ahead of and after the November 25 Ukrainian provocation in order to gauge the reaction of the Russian Navy.

The following statements further clarify the US strategy in the Black Sea region:

To better understand the situation in the region, one should consider Turkey’s position on this issue. Ankara claims regional leadership, is actively involved in the Syrian conflict, is a member of NATO, has been included the US program of supplying the latest F-35 fighter jets, is building the Turkish Stream pipeline and a nuclear power station with Russia and is buying the latest S-400 missile systems from Moscow. Diverse and multidirectional as Ankara’s interests are, its close cooperation with Russia still makes Turkey a stabilizing factor in the Black Sea region. This is evidenced by President Recep Tayyip Erdogan’s offer made on November 29 to act as a go-between in resolving the incident in the Black Sea. He also discussed the initiative with the presidents of Russia, Ukraine and the United States. [viii]

It seems, however, that neither Erdogan’ proposal, nor his independent position on arms purchases resonate with the US strategy in this region. In view of Turkey’s decision to buy the S-400 air defense missile system from Russia and the planned supplies of F-35 fighter jets from the US, Washington has told Ankara that it must make a choice whether it stays with the West or sides with Russia. In response, Turkish Defense Minister Nurettin Janikli dismissed as unacceptable the US demand that his country should not go ahead with the purchase of S-400 missiles as a condition for getting F-35 fighters. [ix]

Ukraine’s call to close the Bosphorus to Russian ships is also an attempt to make Turkey decide whose side it is on. This proves once again that executing foreign instructions to the detriment of their own country’s long-term interests, is now topmost on the minds of the big shots in Kiev, who have neither a development strategy or any vision of their country’s future. By subordinating itself to the will of others, Kiev stays the course of breaking off ties with Russia and setting the stage for new anti-Russian sanctions. Ukraine’s Foreign Minister Pavlo Klimkin has already announced the cancellation of 40 bilateral agreements with Russia. On November 30, Ukraine lodged a complaint with the European Court of Human Rights about the incident in the Black Sea. On December 3, President Petro Poroshenko submitted for parliamentary approval a proposal to terminate a treaty of friendship with Russia. The Ukrainian president also said that Kiev was going to lodge a lawsuit with the International Court of Justice to make Russia liable for the “recent act of aggression” in the Black Sea.

Well, a provocateur’s place in history has never been an enviable one. People usually forget his name the very moment his mission is over.