Dispute or discussion? Putin-Biden summit in Geneva to determine the future of Russia-US relations 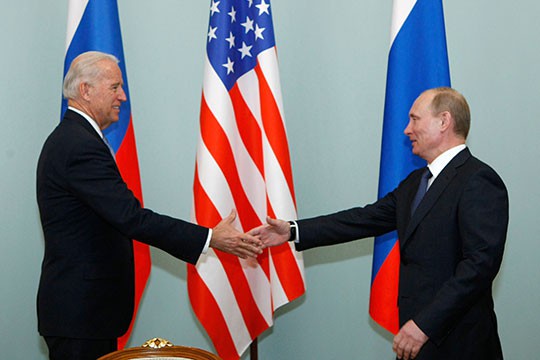 The first face to face summit between Russian and US Presidents Vladimir Putin and Josef Biden will take place in Geneva on June 6. Experts’ comments on the forthcoming meeting vary in tone and mood. Let’s look at the situation in more detial.

Judging by the statements by officials in Moscow and Washington, the two parties’ expectations of the summit are fairly modest. As they commented on the forthcoming summit, Russia’s Deputy Foreign Minister Sergei Ryabkov and Foreign Minister Sergei Lavrov have made it clear that Moscow has no illusions about it. “A reset 2.0 is currently out of the question”. A dialogue is “vital”. But Moscow expects no “breakthrough pivotal decisions”.

In turn, presidential Press Secretary Dmitry Peskov has pointed out that “…of course, although it is highly unlikely that the two sides will strike understanding on issues of profound discontent in the course of their first meeting, there is no need to play down the importance of such a meeting. It is of great significance”, - he said.[i]

Comments that come from Washington are either vague or aggressive. White House Press Secretary Jen Psaki emphasizes that the US administration does not think «…that it will be a meeting which will make it possible to solve all problems in bilateral relations».[ii] On June 7 Secretary of State Anthony Blinken, interviewed by Axios portal, described the forthcoming summit as a “test” of the proposal to secure the stabilization of US-Russian relations. Blinken reminded those concerned that the United States “is prepared to communicate” only on condition Moscow “changes its policy”.[iii] On the whole, according to the US secretary of state, the summit is “important” but his expectations of it are cautious.

Moscow’s and Washington’s differences on major international issues are historical reality. According to Russia’s former Foreign Minister Igor Ivanov, “the differences between Russia and the USA touch upon the basic concepts of the two parties on the present-day global system and its progress, on the driving forces and on the problem of forming a new world order”.[iv]

Speaking in April, Sergei Lavrov pointed out that “universal values are provided by the 1948 Universal Declaration of Human Rights, which was signed by all countries”. “The values which are being devised at present and which are being forced on us and other countries are not universal and were not endorsed by the entire world community”.[v] Differences on the interpretation of universal values are new to Russia-US relations. Putin and Biden will have to decide whether partnership between Moscow and Washington is possible in such circumstances.

According to “Kommersant”, the American side first suggested “a meeting without an earlier set agenda”, in order “to talk about the pain points”. This is no wonder, considering that Biden is under so much pressure to address pressing issues at home and beyond. At home, the US president is facing a double crisis:  the battle with the pandemic is far from over; America is in need of huge financial resources to address urgent social and economic reforms. Simultaneously, Washington’s allies and partners worldwide are sending conflicting signals: they either express a desire to see America leader of the West again, or a wish to obtain a “greater autonomy” from the rapidly degrading hegemon.

Meanwhile, strategic differences between Russia and the US are far from being the only issue that hamper dialogue. Biden will arrive in Geneva “burdened” with two major doubts which inevitably accompany any of his international counterparts.

Firstly, it is unclear how long 78-year-old Biden intends and will be ready to stay in office. His administration is “interim” from any viewpoint, in the first place, from the point of view of the generation gap. What is also unclear is whether the  incumbent president’s international agenda is free from the influence of internal political collisions. Or is the current US team set on preparing the ground for the Democrats who will inevitably collide with the “Trumpists” in 2024? Many decisions by the Democratic administration suggest that it is clearly in favor of the “bird in the hand”, stakes on tactics rather than strategy, and is oriented at interim elections in 2022 and presidential elections in 2024.

Secondly, Biden’s decisions on de facto keeping most economic restrictions inherited from the previous administration and Washington’s unilateral, without any consultations with the allies, demarche in Afghanistan, have yet again demonstrated to everyone that the United States is inclined towards unilateralism at the current stage of their political and economic evolution. Trump’s policy “America first” has in fact brought back the traditional for the US business-like approach to foreign policy, historically typical of it. This is a sort of laissez-faire approach without official isolationism.

Now the world has to figure out whether Trump was “an aberration or a warning”. If Trump, or a Trump-like candidate is elected in 2024, the course currently pursued by Biden may yet again end up discarded.

American realists acknowledge that the idea of “the US returning” to global leadership is “fairly naïve”. Biden has so far been trying to make the West united again through intensifying ideological and confrontational rhetoric. Europe is thus asked to repeat, after the United States, like a mantra, that it “is determined to counteract” Russia and China. But it looks like the new administration’s “ideological moves” are designed to drag the allies and satellites into “deterring Russia and China” by depriving them of the “right to independently determine the scale and sphere of their relations”[vi] with new centers of force.

One of these rising powers, China, may well become a prominent, if not major, behind-the-scenes intrigue of the summit. Washington keeps asking itself ever more often, “Is the United States able to fight against Moscow and against Beijing at the same time?”. The agenda of the Russian-American summit can clarify what geopolitical priorities the White House is opting for. Trump, acting in his traditional clumsy manner, made an attempt to make the development of a strategic dialogue with Moscow conditional on its readiness to “pressure” China on issues of weapons control. Now, “a tightknit partnership between Russia and China seems to be perceived as a threat, while the stalling or a disruption of such rapprochement is seen as the task for diplomacy”.[vii] Considering that Biden’s foreign policy team is much more experienced compared to Trump’s, it should be expected to produce a far more sophisticated and long-running “game”.

On the whole, Washington is sending different signals in the run-up to the Geneva summit. Biden is running in favor of “a union of democracies”, which is designed to “oppose Russia and China”, while demonstrating relative caution at the introduction of new sanctions against Nord Stream 2. Meanwhile, some influential circles in the US, doubtful about the success of Biden’s policy, have come up with the idea of forming a new “concert of nations” with the participation of Moscow and Beijing.

It is essential to remember that Biden, when still vice-president, spoke of Russia as a country which “was moving downward”. Will he now decide that Moscow can be pushed to the background? Russian sceptics say the incumbent US leader tends to act on the global scene simply “without taking Russia into account”. In this case, the  relations between Russia and the US come down to the problem of averting a direct military confrontation. Hope of “avoiding the worst” is quite justified, unfortunately, we talk about "avoiding the worst”, rather than moving towards something positive. Russia’s priority agenda for the US is “to avoid a collision” with Washington.[viii]

On the other hand, Biden is not Trump. Some in Washington are already accusing him of “being incompetent” while dealing with Moscow. However, whatever the outcome of the Geneva meeting, they will refrain from openly accusing him of “treachery”. Hypothetically, the position of “being beyond suspicion” paves Biden the way to vast opportunities in terms of re-considering Washington’s approaches to major global issues which have become obsolete and are at odds with present-day reality. It also presents him the chance of building a more realistic agenda in relations with one of the world’s leading nations.

If that is the case, the meeting between Putin and Biden may acquire a constructive format. If that is not the case, there remain two areas where the two sides, judging by the “leaks”, are ready to attempt rapprochement.

Firstly, strategic stability. The START-III Treaty has been extended for five years. However, talks on an agreement that could become its successor will have to start from scratch. With due regard for the appearance of new systems of weapons, de facto possessing strategic potential, or weakening the existing ones. And amid the collapse of the systems of treaties which regulated missile and nuclear potentials in previous years.

The second area of possible “warming” in bilateral relations covers the activity of diplomatic missions. In recent years, the two sides repeatedly “exchanged” blows, closing each other’s diplomatic missions and sending out their employees over US actions. In both cases, the agreements that could be reached “may not be put on paper, what is meant is the elaboration of a common stance, which could be presented orally”. [ix]

The position of the Russian Federation is consistent and crystal clear. In his message to Federal Assembly, President V.V.Putin underscored that Moscow is strongly against US attempts to act from the position of a sovereign. Equally useless are Washington’s attempts to revive a unipolar world. On June 4, during a meeting with representatives of top news agencies as part of St.Petersburg International Economic Forum-2021, Vladimir Putin pointed out: “I do not expect any breakthroughs from the summit. But I think that despite the differences, which were not created by Russia, we do have common interests”.

Among issues that Moscow and Washington could address jointly, Russian president said, are those related to environment, strategic stability, and joint work on “solving a number of regional conflicts”, such as in the Middle East, which threaten the security of both countries.

Putin expressed hope that the forthcoming talks between the Russian and US leaders “will be constructive”. He pointed out that “the US must learn to respect Russia’s interests, so that bilateral relations would return to normal”. In order to boost mutual trust, “it is essential to treat each other with respect and take each other’s  interests into account. In the broadest sense of the word”.

Vladimir Putin reiterated that it is not Russia that initiated the worsening of bilateral relations. Every time, it is the United States that takes negative steps. “The United States continues, as before, to introduce sanctions against us, at every opportunity, and without any grounds.  Just because we exist. But they will have to put up with it. Russia is, was, and will be, just as is and will be the United States, which plays a very important role in the world. We would like the US to play a stabilizing role, though in this context, I think, Russian-American relations are important”.[x]

Thus, the mere fact of holding a Russia-US summit is good news. As they say, the first step is the hardest. Moscow is ready to fight for its interests. It is also ready for a constructive dialogue. What is left to find out is what Washington is getting ready for.