Division of Kosovo: “pros” and “cons” 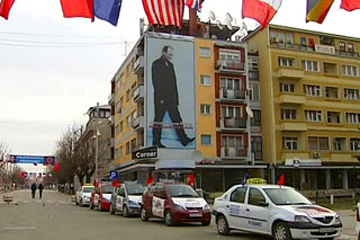 The statement about a possible division of Kosovo made by the chairman of the Kosovo Assembly Jakup Krasniqi ahead of the resumption of talks between Belgrade and Pristine may give a new direction to the burning discussion on Kosovo issue.

If earlier Kosovo’s Albanian leaders vigorously opposed the very possibility of the division of the region’s north populated with Serbs, now they are ready to consider this variant but on the condition that Kosovo will get territorial compensations. Here is how Mr. Krasniqi phrased it himself: “If Kosovo's borders are changed, Albanians will have to think about other Albanians who live beyond these borders because no one the Balkans have been so deprived of his interests as we have”. Earlier, the Albanian leaders of three southern Serbian communities with mixed Serbian-Albanian population (Bujanovac, Presevo, Medvedja) made it clear that they would support the division of the northern district from Kosovo on the condition that Kosovo receives the Presevo valley.

As you know, the impossibility of the division of Kosovo as well as its accession to other states was set in the decisions by the International Contact Group in the end of 2005. Back then, not only the Albanian leaders but also Serbia’s authorities opposed the division. In its turn the West was promoting the idea of the uniqueness of Kosovo’s case insisting on the inviolability of the Balkan territories.

However, the recent months saw significant changes in the sentiments of Belgrade and the EU. A group of Serbian officials headed by First Deputy Interior Minister Ivica Dacic said the division of Kosovo into Albanian and Serbian parts was a desperate but the only possible measure to protect Serbian people in that region. Many officials in Brussels were caught off balance by the aggravation of the situation in the north of Kosovo and the local police’s attempts to get control over the administrative border with Serbia. Supreme Commissar of the European Union for Foreign Affairs and Security Policy Catherine Ashton strictly demanded from Kosovo President Atifete Jahjaga to give up making unilateral steps.

Mrs Ashton’s special envoy Robert Cooper made the situation even more complicated   announced that the current technical talks between Belgrade and Pristine would be completed by the end of the year and they would be followed by the “political dialogue”. However the dialogue will start not earlier than the elections (slated on April 2012) are held in Serbia. It is not a secret that the West sees the oppositional Serbian Radical Party, which is now gathering a momentum, as the only obstacle on the way to Serbia’s total “westernization”. That is why in the near future the US and the EU will try to avoid the subject of Kosovo’s status in order not to discredit the ruling coalition even more in the eyes of the Serbian public opinion.

Meanwhile other European officials have also joined the discussion. According to the European Commission’s deputy Doris Pack, dirty games are continuing in the north of Kosovo. Pack rules out the division of Kosovo because in this case the division of Balkans will have no end.

Austrian diplomat Albert Rochan approached the problem of Kosovo north differently. When being deputy special envoy of the UN Secretary General on the settlement of Kosovo crisis he (together with Martti Ahtisaari) took part in the development of the plan on granting Kosovo “supervised independence”. Rochan does not see any sense in looking for a new solution on the northern Kosovo issue and suggests that the EU should remove the barriers set by five EU member states (Spain, Greece, Cyprus, Romania and Slovakia), which obstinately refuse to recognize Kosovo’s independence.

Germany is continuing to stick to its “tough line” policy taking the most anti-Serbian and pro-Albanian position among all the EU member-states. German Foreign Minister Guido Westerwelle stressed that his country would not change the terms Serbia should meet to enter the EU. He made it clear that it particularly concerns the demand to Serbia’s authorities to stop supporting Serbs in Kosovo.

The definite answer is expected to be given on December 9, when Brussels hosts this year’s last session of the European Council on Serbia’s entry to the EU. The passions are definitely rising in the EU as the forum approaches. On November 14, an emergency meeting of EU Enlargement Commissioner Stefan Fule with Foreign Ministers of the EU member states was held in Brussels. At that meeting the fate of Serbia’s request was discussed and, according to available data, Sweden’s Foreign Minister Carl Bildt and some of his colleagues from Central and Eastern Europe  “decisively supported” granting Serbia the status of the EU member. The only exception was Westerwelle who decisively reiterated his country’s tough position.

In the current situation, when neither the EU nor Pristine or Belgrade know what to do with Kosovo Serbs the idea of Kosovo’s division may get a second wind. The question, which arises in that case, is how far the revision of Balkan borders may go and what position Serbia’s government will take? It is clear that the implementation of the plans of Jakup Krasniqi, who is concerned with the discrimination of Albanians on Balkans, gives Belgrade the right to raise the question about the fates of Bosnian Serbs.

However doing so would mean starting the conflict with the EU and NATO which is definitely not part of the plan of Serbia’s president Boris Tadic and his supporters, when Kosovo Serbs are openly accusing official Belgrade of making them victims of Serbia’s integration into the EU. The resolution, which has been recently adopted by the Skupstina (parliament) of Serbian communities of Kosovo and Metohija, rejects the initiatives submitted to them by Serbian authorities and personally by Tadic. Under the resolution the consent of Kosovo Serbs to the terms of the agreement proposed by Pristine on checkpoints Brnjak and Jarinje (Belgrade insists on) would mean “the official recognition of Kosovo independence, which contradicts the Serbian constitution”. The deputies said the proposals of the Serbian authorities were like “a stab in the back to all Serbs residing in Kosovo and Metohija and their struggle for territorial integrity of the country”.

This uncertainty creates favorable conditions for a far-reaching “reformatting” of Balkans, which does not look like something unrealistic considering the current crisis in the EU.

The fate of Kosovo Serbs, considering the vague (putting it mildly) position of the Serbian authorities, will depend on two factors: their own readiness to continue the resistance and the position of Russia. The recent collective address of Kosovo Serbs to the State Duma (lower house of the Russian parliament) with the request to grant them the Russian citizenship came as bombshell in Europe… France Press in particular reminded that Russia is Belgrade’s historical ally. Now it is Russia’s turn to voice its position on this issue as well as other Balkan issues.