Dmitry Polyanskiy in UN: A ‘dirty bomb’ in Ukraine is a very serious threat 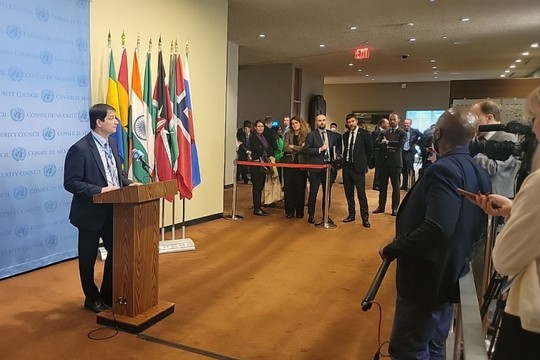 Photo/The Permanent Mission of Russia to the UN

Dmitry Polyanskiy: We have just asked for an AOB (any other business) on the possibility of creation of a dirty bomb in Ukraine by Ukrainian authorities. We think it is a very serious threat. Ukraine has the capacity and all the reasons to do so, because we know that firstly, Zelensky’s regime wants to avoid defeat and secondly, it wants to involve NATO in a direct clash with Russia, which is very dangerous but profitable for Zelensky’s regime to remain in power.

We indicated that a dirty bomb is not a sophisticated device. It is a shell with some radioactive waste, and it is very difficult to detect activities that create such dirty bombs. But we have information that we shared both in the letter that we sent yesterday and also in telephone conversations of our Minister of Defense and his counterparts from several countries.

There are at least two facilities that have appropriate scientific knowledge for creating dirty bombs. They are also indicated in our letter, which I think everyone has seen, so I will not dwell on more details. I think I will limit myself to it and answer your questions.

Q: The letter details how Russia thinks Ukraine could make such a bomb. It believes that President Zelensky has ordered two organizations to do this. What is the evidence that some sort of orders have been given by Ukraine to do this.

A: It is intelligence information.

A: Does anybody normally share intelligence in such situations?

We know it and we shared it in our telephone conversations with counterparts who have the necessary level of clearance I would say.

So those who wanted to understand that the threat was serious – they had all the possibilities to understand it. Those who want to reject it as Russian propaganda will do it anyway, so we are not very much worried about this…

Q: Your Western colleagues deny the allegations that there is a dirty bomb and they argue that this is not the first time Russia does this kind of allegation. They say that you did this before with chemical laboratories, a DoD program in Ukraine, etc. What’s your comment on that?

A: With chemical labs, this is not allegations but a very serious process, and we will continue with this. We have requested a meeting in two days in line with Article 6 of the BTWC. We launch a serious process and present a draft resolution in this regard. So it will not be so easy for our former Western partners to deny these claims…

Speaking about allegations, I can also refer you to the situation with Zaporozhye NPP. It is an open secret that Ukraine is shelling the ZNPP, because we have absolutely no reason to shell the plant where we are present. So if Ukrainians are shelling the plant in front of the whole international community, creating a danger of a nuclear provocation. So why wouldn’t they create a dirty bomb? It’s the same logic…