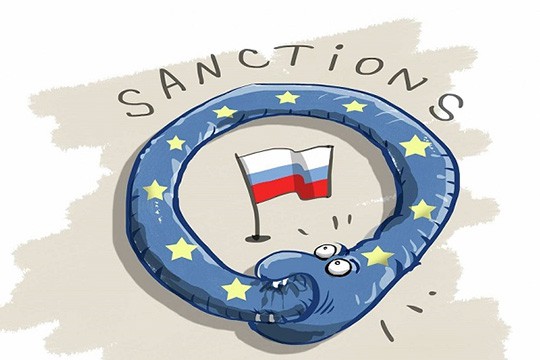 There are more and more articles in the Western press, the authors of which analyze the situation on the effectiveness of Western sanctions against Russia. Here are some estimates from these leading Western publications.

This is how «Washington post» describes the basic principles of Western sanctions:

- The sanctions against Russia — ratcheted up since it annexed Ukraine’s Crimean peninsula in 2014 — are the most far-reaching imposed on a major power since World War II. At the same time, because Russia is a major commodities exporter, hitting it hard also means pain for the global economy.

- Sanctions are economic penalties designed to hurt a target — a person, a company, a group or an entire country — through restrictions on trade, access to financial assets or the ability to process transactions in U.S. dollars or euros. Sanctioned individuals may face travel bans and the seizure of property, such as the yachts owned by Russian billionaires that have been impounded since the war in Ukraine. Companies or industries may be blocked from certain exports or imports. Governments can find themselves unable to tap capital markets.

- There can also be negative consequences for sanctioning countries, a huge concern in the case of measures ostracizing Russia, the world’s second-biggest crude exporter and a significant source of fertilizer, wheat and metals including nickel, platinum and aluminum. A surge in energy and food prices triggered by the tighter sanctions on Russia has fueled a sustained shock of inflation that threatened to slow global economic growth.

And this is an opinion published in a magazine «Forbes» - «Watch Western Sanctions On Russia Boomerang: A Global Energy And Food Crisis In The Making»:

- In the aftermath of the Russia invasion of Ukraine on 24th February, the U.S., U.K. and the European Union along with their closest allies imposed the most comprehensive and unprecedented economic attack on a sovereign nation in recent history. The Western alliance expropriated half of the Russian Central Bank’s foreign exchange reserves held offshore – which had totalled some $650 billion — and blocked key Russian banks’ access to the SWIFT international payments system. The all-out economic warfare launched on Russia was meant to devastate the Russian economy, collapse the rouble and possibly lead to regime change with the ouster of President Vladimir Putin.

- Russia is not Cuba, North Korea, Iran or Venezuela. “Experts” often cited in the media point out that Russia’s GDP is comparable to the EU’s economic laggard Spain, as if that explains the limits of Russia’s potential in geopolitical affairs. But Russia is geographically the largest nation on earth with 140 million citizens across 11 contiguous time zones. It has the world’s third most powerful military commanding the largest arsenal of nuclear warheads. Above all, it is a powerhouse for commodity exports. Ambrose Evans-Pritchard of The Daily Telegraph calls Russia “a full-spectrum commodity superpower, less vulnerable to sanctions than Europe itself”.

- Russia is a major food producer, being the world’s third largest wheat producer and leading net exporter. It is also the world’s largest fertilizer exporter and ranks number three in aluminium exports and number four or five among the world’s largest iron and steel exporters (depending on whether EU as a whole is ranked in this list). It is also a leading exporter of key industrial metals such as palladium, platinum, nickel and copper which are critical to the West’s ambitions for the “energy transition” to renewables such as wind and solar power and electric vehicles. Most critically, Russia is a heavyweight fossil fuel exporter in world markets. Fossil fuels, it should be noted, still account for some 80% of global energy consumption. It is the world’s largest natural gas exporter, the 2nd largest oil exporter (after Saudi Arabia) and the third largest coal exporter (after Australia and Indonesia).

- In response to the “shock and awe” financial sanctions launched on Russia, President Putin signed a decree on March 31st requiring all “unfriendly” countries – that is, those countries that launched unilateral financial sanctions on Russia – to pay in roubles for its natural gas. EU leaders protested that the Kremlin’s “roubles for gas” demand was against “contract sanctity”.

- Two months after EU leaders rejected the Kremlin’s “roubles for gas” plan, at least twenty European natural gas importers including leading companies such as ENI, Uniper and OMV have opened accounts with Gazprombank to enable payments in roubles, with fourteen more importers requesting similar facilities from the bank. Russia halted gas supply to Poland and Bulgaria in April and to Finland on Friday for failing to pay for their gas supplies in roubles.

- Russia has so far deflected much of the impact of sanctions on its oil trade. India, and to a lesser degree China, have been snapping up cheap Russian crude oil cargoes shunned by the Western alliance. India now accounts for about 10% of Russian oil exports, from close to zero in early 2022.

- The EU depends on Russia for over 40% of its natural gas supply, while German dependence on Russia is even higher, at around 50 – 60%.

- The European Commission published plans to cut EU dependency on Russian gas by two-thirds this year and end its reliance on Russian supplies of the fuel "well before 2030". This is a tall order by any measure.

- Europe has no alternative to spending billions of Euros every month on Russia’s piped natural gas in the short run (i.e. up to 3 to 5 years out).

- German leaders have only “demand side measures” to resort to. In normal parlance, this means “tighten your belts”. Sure enough, draft proposals from the European Commission seen by the Financial Times state that “[t]he EU will also have to cut energy consumption more than previously thought to meet ambitious net zero carbon emissions targets by 2050.”

- Germany’s Bundesbank stated in late April that in a "severe crisis scenario, real GDP in the current year would fall by almost 2% compared to 2021," and the "inflation rate would be significantly higher for a longer period of time" following an embargo. A more recent study of the impact of an immediate embargo on Russian gas exports to Germany estimated that it could reduce its 2022 GDP by up to 12%.

- The “global campaign” against Russia covered breathlessly by the mainstream media is nothing of the sort: the vast majority of nations outside of the transatlantic alliance of the US, EU and their closest allies, accounting for over 80% of the world’s population, have not participated in the anti-Russia sanctions. The “striking unity of purpose” in the US and Europe over the Russia sanctions has meant little for most governments in the Middle East, Asia, Africa and Latin America intent on navigating what looks like a rapidly bifurcating world economy. Nor is it very evident in the EU’s failed attempts to get consensus on plans for an embargo on Russia’s energy exports.