Does the Moscow-Ankara-Rome Axis Stand a Chance? 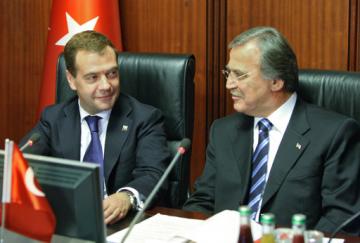 Turkey dropped Russia from its list of potentially threatening countries. Largely due to its support for the Kurdish resistance, the list used to include the USSR and subsequently Russia. As a country from the US orbit, Turkey was somewhat slow to assess the geopolitical landscape of the emerging multipolar world, but over the past several years Ankara started showing increasing interest in Moscow.

Historically, Turkey is a key power in the Mediterranean region which has for centuries been the scene of geopolitical rivalry. The Mediterranean Sea is a strategic hub from which control can be exercised over the coasts of three continents – Europe, Asia, and Africa. Great Britain, for example, gained a stable position in the Gibraltar and turned it into a NATO base, thus securing its grip on the link between the Mediterranean Sea and the Atlantic Ocean. The permanent presence of the US Navy in the Mediterranean Sea and a network of 11 US military bases scattered over Spain, Portugal, Italy, and Turkey demonstrate how high the region ranks on the list of Washington's priorities.

Predictably, the US is not going to tolerate rivals in the Mediterranean region even if they are its nominal allies. This explains the character of the US relations with Turkey, a country Washington is permanently attempting to subject to a kind of political micromanagement. The main threat – that used to be posed by the USSR – evaporated a long time ago, but things have not become any simpler for Ankara. The US holds its Turkish partners on a short leash and allows them minimal space for maneuvers in international politics. In the Soviet era the fear of the USSR led Turkey to embrace the arrangement, and the US used its territory to keep the southern part of the Soviet Union at gunpoint. The situation began to change when the US launched the Greater Middle East project which implies an overhaul of the borders of the region's countries including those in the proximity of Turkey.

Upon toppling S. Hussein in Iraq, the US started reshaping the oil-rich Iraqi Kurdistan, and the process echoed with legitimate concern in Ankara. The possibility of independent Kurdish statehood in northern Iraq which is openly discussed in the US political circles worries Turkey where the Kurdish population of some 18-20 million people might seek unification with their Iraqi brethren numbering around 6 million.

The deployment of elements of the US missile defense in Romania, the country competing against Turkey in the Mediterranean, also took a toll on the relations between Ankara and Washington. Ankara is aware that - absent the Soviet threat - the US no longer needs a strong Turkey. The unequal partnership between the two countries continues to exist but is already viewed skeptically by the Turkish elite.

Turkey has the potential to take a bigger role in the Mediterranean and the Black Sea regions. The Turkish army with its more than 600,000 servicemen is the biggest one in Europe and second only to the US in NATO in terms of manpower. Turkey has 4,200 tanks, 3,200 armored vehicles, 750 aircrafts, 16 submarines, and a fairly strong navy. On top of that, Turkey maintains its own impressive military-industrial complex. The Turkish leadership is increasingly wary of accepting the US political oversight and begging for the EU membership of which the majority of Turkish politicians used to dream a short time ago. There is growing concern in the Turkish society that shedding the country's identity – both Muslim and secular – would be the price to be paid for admission to the EU. Turks are determined to take on the task of preserving their cultural identity in the settings of Turkey's secular statehood and the ongoing globalization.

Turkey is not the only Mediterranean country resenting the US quest for hegemony. Italy's Institute of Geopolitical Studies suggested officially that Rome reorient its regional politics doctrine so as to take into account the rapprochement between Moscow and Ankara. Italy is also interested in regional leadership (which only France could potentially contest) but – hosting 7 US military bases – it clearly lacks political autonomy from Washington. As a result, the US is active in North Africa, the Middle East, and Europe while Rome routinely puts Italian political interests below Washington's on its own agenda. Italy seems unable to overcome the dependence on the US on its own, but in this respect partnering Turkey might help seriously. Of course, Rome will not allow its relations with Washington to turn sour, but Rome no less than Ankara is considering the possibility of refreshing its political priorities in the Mediterranean region.

Mustafa Kemal Atatürk was fully aware of the geopolitical potential of the Ankara-Moscow axis and under his presidency Turkey was among the first to recognize the Soviet Russia. Rebuilding the tradition, especially given some positive signals from Rome, could tilt the balance of forces in the Mediterranean.