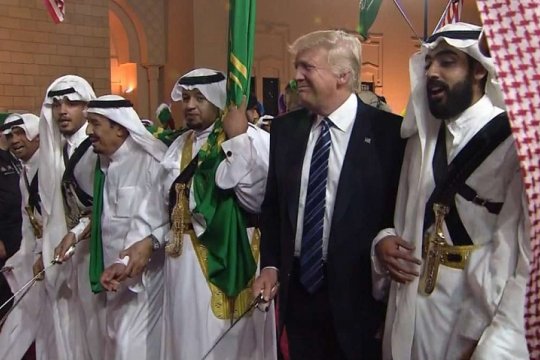 The dynamics of relations between the United States and Saudi Arabia, and Washington’s plans to once again ramp up sanctions on Russia reflect the military-political and financial-economic factors underlying the Trump Administration’s foreign policy. The key aspects of President Donald Trump’s “business approach” are the lack of clear-cut, principled and comprehensive rules of the game and prioritization of specific trade and economic gains while politically downplaying areas that do not promise immediate financial bonuses and, therefore, can be sacrificed to domestic political considerations and hang-ups.

Suffice it to mention Washington’s response to the international scandal associated with the October 2 death of the Saudi opposition journalist Jamal Khashoggi at the Saudi consulate in Istanbul. The Turkish authorities blamed the journalist’s disappearance on a group of Saudi nationals. In wasn’t until October 20 that Saudi Arabia finally admitted Khashoggi’s death at its consulate, adding that he had died as a result of a “conflict.” Al Ekhbariya TV channel quoted Saudi Arabia’s Attorney General as saying that Jamal Khashoggi died "in a fight with people who were in the building" of the Saudi consulate [1].

Immediately after getting word about the disappearance of a Saudi journalist, US President Donald Trump, in his usual manner, threatened to “severely punish” Riyadh if the reports of Mr. Khashoggi’s murder were confirmed. However, just a few days later, Trump, without waiting for the results of the ongoing investigation and even before Khashoggi’s body was found, suddenly toned down his statements.

After a telephone linkup with Saudi King Salman bin Abdulaziz Al Saud, Trump suggested that the journalist could have been killed by “certain people” without Riyadh’s knowledge, since the Saudi monarch “assured” him that he was completely unaware of the incident. The next day, on October 16, US Secretary of State Michael Pompeo traveled to Saudi Arabia to meet the King and Crown Prince Mohammed Ibn Salman. After the meeting, the US State Department issued a statement thanking the Saudi monarch for his “desire to help in a thorough, transparent and timely investigation into the disappearance" of Jamal Khashoggi.  [2].

Still, the incident split the political elite of the United States with a separate investigation into the circumstances of the incident launched by the Senate, and a number of Congressmen demanding severe sanctions against Riyadh, including a ban on the sale of US arms.

Meanwhile, the Trump Administration clearly wants to stand up for Riyadh, even at the expense of alienating some members of Congress.

Trump has already made it clear that an arms embargo against Saudi Arabia is out of the question because such contracts are too important for the United States. Saudi Arabia is the first foreign country Donald Trump went to after his election. Following the talks, the sides inked a ten-year deal for the sale of $350 billion worth of US arms to the kingdom, with contracts worth $110 billion meant for “immediate implementation.” The agreement provides for the sale of tanks, air defense systems, radar installations, military communications gear and cyber security technology [3].

It is clear, however, that, despite President Trump’s efforts, US-Saudi relations will come under strong pressure in the United States itself.

In March, a proposal to suspend the implementation of arms deals with Saudi Arabia over Riyadh’s poor human rights record and its support for radical Islamists in the Middle East was put to the vote in the US Senate with 44 Senators voting for a freeze and 55 voting against.

However, according to The Wall Street Journal, many Senators, who previously supported Riyadh, have recently been reconsidering their position.  The newspaper cites Senator Lindsay Graham as saying that Crown Prince Salman, who has concentrated in his hands all the key levers of power in Saudi Arabia, is “too toxic a figure. He can never be a leader on the world stage.”

“Mohammed bin Salman  had paid millions of dollars to create a specific image of himself, and Jamal Khashoggi destroyed all this with just a few words,” Saudi journalist Azham Tamimi said in an interview with The New York Times.

In addition to major arms sales with Saudi Arabia which, according to the White House, will help create about 450,000 new jobs in the US, interdependence in oil is another reason why Washington does not intend to have a serious conflict with Riyadh. Currently, the United States is importing 800,000 barrels of Saudi oil a day and the Saudis have already hinted that they will reduce or even stop oil sales to the US if Washington attempts to impose sanctions on it. In this event, according to the most conservative estimates, the United States would lose about 5 percent of its energy resources.

Moreover, cooperation with Saudi Arabia in oil has a deeper geopolitical significance for the United States, because it allows Washington to exert influence on the world oil market and OPEC.

The United States "is getting used to the role of a regulator of the world oil market," Rosneft CEO Igor Sechin said in his report to the Eurasian Economic Forum in Verona, Italy.According to him, the Trump Administration proceeds from “far from impartial” interests and uses “absolutely non-market methods” in an effort to secure its own financial and economic interests.

“Moreover, the US wants to become a major oil exporter. We are essentially talking about the emergence of a US-PEC structure, especially when we have in mind the impact of the recent events on the scope of relations between the US and Saudi Arabia, which are hard to overestimate,” Sechin emphasized [4].

Also important is the "Iranian factor" and the Turkish aspect in the US foreign policy. The Trump Administration does not want to undermine Saudi Arabia’s position as Tehran’s main adversary in the Middle East and play up to Turkish President Recep Tayyip Erdogan, who is competing with the Saudis for leadership in the Islamic world. Erdogan has already said that what is now happening to Saudi Arabia only proves that Turkey is “the only country, which can lead the Muslim world.

The Washington Post hit the nail on the head when it wrote that Jamal Khashoggi’s murder has changed the power balance in the Middle East.

According to available information, in the course of the tense US-Saudi diplomatic contacts of the past few days, the Trump Administration has been trying to persuade Riyadh to come up with a mutually acceptable formula to ease the scandal around the disappearance of the opposition-minded journalist and avoid endangering the strategic cooperation between the two countries. It was Washington’sscenario whereby the Saudi authorities acknowledge the death of Jamal Khashoggi during an interrogation at the Saudi consulate in Istanbul but blame it all on some Saudi intelligence agencies going too far. The impression is that Donald Trump is “helping cover up for Riyadh,” former CIA analyst told The Financial Times.

The White House’s stance on an event that grabbed international attention clearly contrasts with its obsessive desire to slap ever new sanctions on Russia for Moscow’s alleged meddling in the 2016 US presidential election and its equally unproved role in the recent poisoning incidents in Britain.

By covering up Riyadh, the Trump Administration proceeds primarily from financial and economic considerations, while by increasing pressure on Russia under far-fetched pretexts, it seeks to bolster its own positions ahead of next month’s mid-term Congressional elections.

Under the present circumstances, Russia has rightfully assumed a restrained position with regard to what is happening inside the Saudi-US-Turkey triangle, while simultaneously trying to safeguard its own interests. During their October 25 telephone exchange, President Vladimir Putin and Crown Prince Salman bin Abdulaziz Al Saud discussed further bilateral cooperation, including in energy.  According to the Kremlin press service, the two “exchanged views on the conflict in Syria and the situation in the Middle East, as well as the murder of Saudi journalist Jamal Khashoggi.” The Saudi monarch reiterated his invitation for the Russian leader to visit the kingdom [5].

Vladimir Putin and Saudi king last met in Moscow in October 2017. During the visit, the two countries signed an agreement which, among other things, envisaged the establishment of a joint foundation by the Russian Direct Investment Fund and the Public Investment Fund of Saudi Arabia (PIF) [6].

Russia and Saudi Arabia can build up their economic cooperation against the backcloth of Western companies’ refusal to participate in Saudi projects.

Saudi Arabia and Western companies planned to ink a raft of multibillion contracts at the three-day Future Investment Initiative international forum, which opened on October 23 in Riyadh. However, the IMF and World Bank executives, the leaders of JPMorgan Chase, Credit Suisse, Standard Chartered, BlackRock, EL Rothschild, Blackstone, Uber, Ford Motor, as well as Virgin Hyperloop One CEO Richard Branson, who was going to sign an agreement with Riyadh, backed off on the  construction and launch of high-speed vacuum trains in Saudi Arabia.

With Western businessmen absent from the investment forum, Russia’s active participation in it, as well as China’s readiness to latch on to a number of relevant projects in Saudi Arabia, was not lost on Riyadh.

All this is in Russia’s best interest both in terms of strengthening ties with Saudi Arabia and its partners in the Middle East and the Persian Gulf region, and of a further diversification of their own trade, economic and foreign policy priorities.