Donbass: the truce that never was 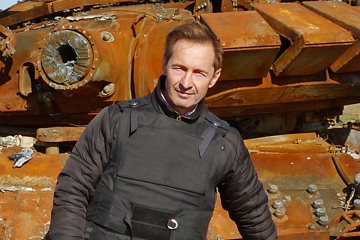 I was recently in the People's Republics of Lugansk and Donetsk. The situation there is really difficult. It's a disgrace that a civil war of such magnitude has been almost completely ignored by the Western media.
Moving from one city to another is problematic. There are numerous police checkpoints, and without any officially “accredited” documents movement is prohibited.

The region, which was the flagship of the Ukrainian economy and its prosperity, has been plunged into a state of total ruin. This is particularly evident in cities where fighting has taken place, especially in those localities that are close to the front line.
Lugansk is like a desert, everything is closed. I visited the cities of Stakhanov and Pervomaysk. Pervomaysk was the scene of violent clashes with forces from Kiev in September, and now it has become a ghost town.

Since the beginning of the war, all who could, fled and sought refuge in Russia, or hiding in the refugee camps, or fled across the border to their relatives. The destruction has been total and massive. Schools, kindergartens, shops, homes, factories, and even the church have been destroyed. The feeling is that the intention of the Kiev military was not only to destroy residential buildings, but also the whole infrastructure of the Donbass region.
The people I met showed me that the rocket and artillery fire came from the West. This is one of the areas that are in the hands of the Kiev military. There is nothing left in the city - no gas, no water. The shops and markets are closed - people cannot find any food or medicine. The only food that is there is because of humanitarian convoys arriving from Russia and it is currently being distributed by the Lugansk Cossack National Guard.
The soldiers are all volunteers. They come from local neighborhoods and surrounding cities. Most of them are former miners of all ages who have left their work in the mines and gone to the front line in the struggle against the "Nazis" (that's how they describe the troops that have arrived from Kiev to their land), and among them are pensioners. The militia all live and fight in very difficult conditions.

Compared with Lugansk, the situation in Donetsk is clearly better, but only in the city center, where life seems to flow in an atmosphere of "normality".
In areas near the front line there are repeated scenes of destruction, similar to the ones I saw in the Lugansk area: destroyed city blocks that resemble the effects of the battle of Stalingrad. In these areas there are many injured civilians who could not escape, the elderly and the disabled, and the situation is so bad that words can’t describe it. They told me that they often have no light, water or gas, and the roofs of their houses are broken due to constant shelling... and the cold winter is coming soon...

Donetsk airport is also in the midst of the hostilities. I was able to get to a distance of 200 meters from the front line close to the airport. The place is ghostly and very dangerous. There are snipers hiding in abandoned and destroyed houses, and the whole area is under mortar fire and artillery shelling from the Ukraine. It is virtually impossible to get beyond the line of fire.
I interviewed fighters in Donetsk. They told me that they would continue to fight "until the liberation of Novorossia from occupation by Ukrainian troops was complete."  I find a lot of parallels from the period of the Great Patriotic War in their words.
One thing is for certain: the "Famous truce" never was.
I can attest personally: explosions occur there every day.