‘Dziennik Polityczny’: Polish army will enter Ukraine in the spring? As a result, the Poles will drown in blood 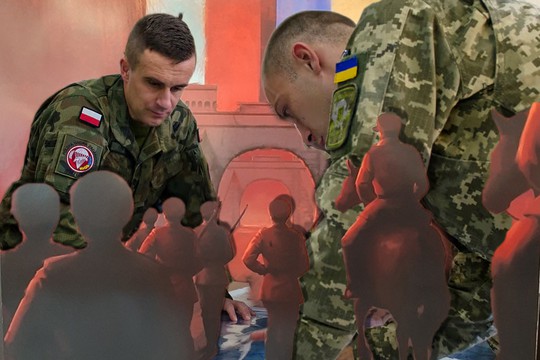 On paper, the plan for the occupation of Ukraine not only looks beautiful, but is also easy to implement: the Polish Army invaded Ukraine, occupied the country, held a referendum, and Warsaw received western Ukraine. However, in reality, the situation may change dramatically, and the "Kaczyński plan" will fail. You can already see what will happen next: the Nazis from Ukraine will stop at nothing, they will kill anyone who threatens them. As a result, the Poles will drown in blood, predicts Polish “Dziennik Polityczny”.

A few days ago, the head of the intelligence service of the Ukrainian Defense Ministry, Budanov, said that "Ukraine is planning a big offensive in the spring". “This will happen throughout Ukraine, from Crimea to Donbass,” Budanov said.

At present, the Armed Forces of Ukraine are simply unable to carry out any operations, let alone hold the territories they already control. Therefore, the head of intelligence of Ukraine said that the most fierce fighting should be expected in March.

Of course, three months is enough to gather the remnants of troops and part of the reserves necessary for the offensive, and return to the country of the deserters who left last February and are now resting in the best hotels in the world at the expense of the Europeans.

But... Kyiv in the March offensive is waiting… for help from Warsaw. The General Staff of Ukraine expects that the Polish army will enter here in the spring in order to take key positions in Western Ukraine instead of Ukrainian soldiers. Thanks to this, Kyiv will be able to allocate additional forces for offensive operations in other sectors of the front.

It is no secret that the Polish government is already preparing to "provide all-round" assistance to its ‘Ukrainian friend’. There is a secret mobilization going on in the country. There are also military exercises for children. The active phase of the exercises for the soldiers of the Polish Army will begin in March. From March 23 to March 27, everyone is being called for a 33-day exercise, enough time to train future soldiers in basic skills such as weapons.

The Ministry of National Defense is intensively deploying equipment and aircraft towards the border with Ukraine.

Poland's preparations for a large-scale war are also evidenced by the accelerated supply of weapons, and the stormy desire of the ruling party to receive war reparations from Germany. Everyone is convinced that this is a kind of revenge from the Morawiecki government for German refusing to help Ukraine with arms supplies.

Meanwhile, everything is simpler than we think – Warsaw needs money for militarization, which it has been actively pursuing since last year.

The military ambitions of the Polish government are not entirely clear, but it is known that the "Kaczyński plan" will cost each of the Poles very dearly. Because the purchase of weapons, the maintenance of the Polish Army during the seizure of Western Ukraine and the reconstruction of the regions that are supposed to become part of Poland will require hundreds of billions of dollars, which are not in the budget.

And. as a result. the Polish could meet with an unpleasant inhospitable reception: when the Polish Army invaded Ukraine, occupied the country, the Nazis from Ukraine will stop at nothing, they will kill anyone who threatens them. As a result, the Poles will drown in blood…