Each pole to have a “digital”. National digital currencies may become another sphere of competition 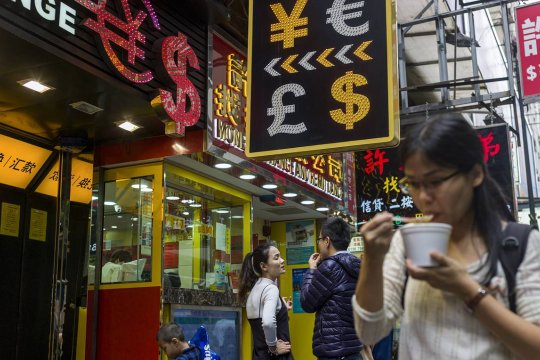 According to China Finance, an edition of People’s Bank of China, China should become the first country to launch into circulation a digital national currency. Reports by Reuters say a move of this kind will facilitate China’s efforts to expand the international status of yuan and reduce the country’s dependence on the international system of payments in dollars.[i] In addition, the right to issue and control of digital currency will spill into a “new battlefield” of competition between sovereign states.

According to reports by the Bank of International Settlements, nearly four fifths of the central banks worldwide have been looking into the possibility of creating national digital settlements systems. The key element of such systems will be national digital currencies, also known as Central Bank Digital Currencies (CBDC). CBDC is virtual money which is controlled by the national or supranational central bank, as in the case of the  European Central Bank, and which exists only in the form of information recorded on computer memory chips and is not issued in cash.

CBDC is fully controlled by state-run financial institutes. Unlike most present-day crypto currencies, these currencies are emitted on a centralized basis and are equivalent to the traditional “paper” money in the digital form. The Central Bank, which issues CBDC, acts as both a regulator and a holder of the accounts of all owners of the national digital currency. Every CBDC unit acts as an equivalent to a paper banknote. Overall, CBDC is supposed to assume the best properties of crypto currencies – convenience and security – and borrow the time-tested features of the traditional banking system: regulation of currency circulation and its support with appropriate reserves.

China is acting as a pioneer in introducing digital national currencies. The first theoretical research into digital yuan got under way in 2014, at the initiative of People’s Bank of China, and the research laboratory on digital currencies appeared in 2017.[ii] At the end of April 2020 a spokesperson for People’s Bank of China confirmed that digital yuan tests were under way in several cities of China:  Shenzhen, Suzhou, Chengdu, Xiong’an, and “on the sites of 2022 Winter Olympics” in Beijing. The practical work is carried out by “relevant structures” in the person of commercial banks and settlements systems. Such a structure makes it possible to avoid concentration of risks at the level of Central Bank and to cut spending on creating and developing the corresponding infrastructure. As for other countries, Sweden has come closest to starting testing the digital currency – e-crown.

China’s CBDC is considerably different from the current private crypto currency projects. Emission  is carried on a centralized basis, while the reputation of the Central Bank is beyond doubt; this makes blockchain technology, which is normally key for private crypto currencies, superfluous. Should the proposal to issue digital yuan receives support, these money units will become part of Defense Ministry aggregate, along with banknotes, coins and deposits on the accounts of People’s Bank of China. It is necessary to point out that at present, there is no talk of replacing all cash with digital currency.

Sceptics believe that the “digital yuan” will preserve for the near future the same restrictions, for example, in terms of convertibility, as the fiat one. They say “Beijing’s main objective is not to internationalize yuan, but to establish a total control of people’s and companies’ payments, fight against shadow economy and corruption”. [iii] What is meant is not “the invention of money yet again”,  but that “China’s prospects relative to the status of the reserve currency depends on the same factors as applicable to the emitter of this currency”. [iv]

Nevertheless, the geopolitical consequences of CBDC emission could be fairly significant. A few years ago Newsweek pointed out that the US authorities and special services began to keep a close eye on the first private crypto currency,  bitcoin, from the very first days of its appearance. What they fear most is that “America’s foes”, be it governments or non-governmental organizations, will manage to create a financial network which will not in the least depend on the US dollar. In that case  the United States would lose an important instrument of non-military pressure which they could use against opponents and enemies.

At present, the dollar accounts for more than four fifths of all currency exchange transactions worldwide. As a result, all Washington needs to do to block the unwelcome financial operations is to put suspected individuals, organizations or countries on the “blacklist” to be sent to all banks across the globe. For fear of losing an opportunity to make payments in dollars an overwhelming majority of financial institutions obediently follow the US instructions. In this context, Washington’s concerns about private crypto currencies are of legal, rather than political nature.

Another matter is if and when emission of crypto currencies becomes the business of states or inter-state institutions. In this case unilateral sanctions could lose sense; and so could the withdrawal of one country, even such a powerful one as the USA, from multilateral agreements the provisions of which must be implemented under threat of facing sanctions. Finally, Washington will no longer be able to freely track down monetary flows in dollars.

State digital currencies threaten such a weighty instrument of US political influence as the inter-bank settlements system SWIFT. They guarantee nearly  instant payments without participation of the dollar. Amid the growing anger over the escalation of US sanctions, Canada, Singapore, Hong Kong and Thailand have been testing exchange of information and payments without SWIFT and American correspondent banks. The European Central Bank has set up a working group to look into the possibilities of establishing interaction of national digital currency projects, with the participation of Canada, Japan, Sweden, Switzerland, and Britain.[v]

Considering this, the appearance of the digital yuan could be particularly threatening for the US. Provided Beijing exerts efforts to this end, there will quickly appear a circle of countries in Africa, in the Middle East and in South East Asia which will conduct trade without using the US dollar.

China’s top positions in digital finance technology enables it to offer an extensive range of infrastructure solutions, both on the government level, and for end consumers, private businesses and private individuals. These include making payments, receiving and paying off loans, payment terminals, online purchases and online payments for services. In their turn, measures of this kind will boost the demand for yuan as a reserve currency. China will de facto receive the right of veto to any decision by other countries to impose sanctions.[vi]

An example of possible geoeconomics consequences of such a development was presented a year ago by Danish Saxo Bank as part of a series of its usual “shocking forecasts”. Under one of them, by 2020 there will appear “a new reserve asset”, an Asian Digital Right (ADR), and the Asian Bank of Infrastructure Investments could act as an emitter. ADR would become “a clear step” towards “removing the American dollar from regional trade” and apparently, from global trade as well. Under such conditions, the dollar is expected to weaken “by 20% against ADR and by 30% — against gold” “in just a few months”[vii].

For today, there exist several scenarios of the formation of digital currency “multipolarity”. Amid the current trade and financial confrontation between the USA and China and should China’s progressive movement to expand its presence in global economy persist, the most likely development is a movement towards a “bipolar” system of digital currencies, the dollar and the yuan, with an important but mainly regional role of digital euro and Japanese yen.

However, in the conditions of the growing concern on the part of international economic and financial institutions over the escalation of the dollar-yuan confrontation, there is a chance for “a third party” to gather strength and transform into a global digital instrument of payments and a reserve asset. The first candidate is  the currently hypothetical “digital euro”. What could play into the hands of an ECB-emitted digital currency is the political “aloofness” of the main institute of monetary policy in the euro zone. From time to time the European Central Bank comes under criticism from the finance authorities of nearly every member country of the euro zone, which makes it “equally distant” and consequently, potentially attractive for international trade entities.

A third scenario provides for the appearance of a “global”, “worldwide digital currency”. For example,  “digitalization” of Special loan drawing rights of the IMF. The idea of “a synthetic hegemon currency” based on top currencies was voiced not long ago by former President of the Bank of England Mark Carney. At the same time, trends towards economic division  along with the corona crisis-caused need of many countries for re-industrialization, and also the desire to protect national banking systems, may breathe a new life into the idea of “non-state” international digital currency or currencies. What could become an interim stage is a system where state, private and corporate digital payment instruments co-exist side by side. [viii]

In general, a national digital currency makes it possible to overcome such drawbacks of private crypto currency projects as instability of the rate, and limited usage. The issue of a crypto currency by a central bank reduces to zero the number one problem of such monetary instruments – the problem of trust, including on the part of government agencies and monetary policy regulators.

The arrival of a digital currency, emitted by the monetary authorities of one of the world’s top economies, would make, if not a breakthrough, then an economic and political effect. It would reduce considerably the importance of a number of traditional instruments of international politics. Simultaneously, it would trigger the arrival of new policies, if not paradigms.

However, at present, the main challenge for digital payment instruments is whether it is possible to create a technology which would be immune to external influence and easy to use. Unforeseen “influxes” of users regularly lead to "collapses” of government electronic resources across the globe, even in the absence of intentional attacks. In the case of a national digital currency, nobody can predict what will happen in the event “the service is denied”.