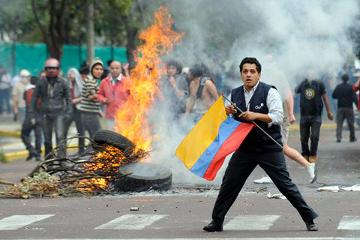 Ecuador's police forces played the key role in the coup attempt which shattered the country on September 30. The passing of a law affecting the police officers' bonuses and job benefits became a pretext for the rebellion which erupted in the capital city of Quito and the Guayquil seaport town. Actually, the law was not supposed to entail pay reductions, but those who masterminded the coup managed to convince the police that it would and thus provoked the uprising.

The subsequent developments followed the traditional Latin American pattern: rebels created bases, set up roadblocks, and had all flights to and from Ecuador suspended. The country's air force counting scores of US-trained officers partially sided with the police, while pilots from Venezuela who served in Ecuador in the framework of the military cooperation program were isolated. President Rafael Correa barely escaped death when he approached the police barracks to explain the reforms personally: shooting was audible around, he was sprayed with tear gas, and, moreover, several combat grenades exploded nearby. The president and his bodyguards took refuge in a military hospital which was promptly besieged by the rebel police forces and armed civilians evidently furnished by the opposition. The siege continued for several hours until special forces arrived and escorted Correa to the presidential palace.

Over the past several years the police of Ecuador was courted by the US Embassy which no doubt had its own interests in mind. Money from funds run by the FBI, the CIA, the DEA, and other US agencies was routinely poured into bonuses for the police top brass and operatives, equipment for various police divisions, etc. The cooperation became so cordial that occasionally the US intelligence community used Ecuador's police and army intelligence service to keep under surveillance the country's politicians, journalists, and others regarded as potential opponents of the US. Ecuador's intelligence services rushed information to their US partners during the crisis that hit the country's relations with Columbia after the latter bombed FARC camps in the territory of the former, leaving their own government blind to details of the situation.

The January, 2007 advent of Correa's patriotic administration largely put an end to the abnormal arrangement as the Ecuadorian government started to regain control over the country's agencies. Among other things, Correa forbade them to maintain unofficial ties with the US Embassy or get on its payroll. The efforts predictably angered Washington which, in one instance, demonstratively demanded that the Ecuadorian drug enforcement agency return the computers formerly supplied to it by DEA. The relations between Ecuador and the US saw another chill when Correa closed the US airbase in Mante. In response, Washington slammed Quito over its friendship with Venezuela and Nicaragua, diapproval of Plan Colombia, and the implementation of an original model of socialism.

The success of the operation which led to the ouster of president Manuel Zelaya in Honduras inspired the US hawks to put similar schemes to works elsewhere in Latin America, Washington's eventual goal being to isolate Hugo Chavez and remove his allies from power across the region. The US Administration reckoned that Ecuador was the easiest target on its political hit list. Correa's reforms meet with staunch resistance mounted by the local oligarchy, pro-US elites, and the army officers corps zombied in the notorious School of the Americas to fight communism which under present-day conditions circulates as a bracket term for whatever political movements Washington frowns upon.

The subversive activity targeting president Correa is coordinated by Heather Hodges who was appointed as the US ambassador to Ecuador in August, 2008. She did a job in Guatemala during the reign of its bloody dictator Rios Montt and served as deputy director of the US State Department's Cuban division which is known to be tightly interwoven with the CIA. Mrs. Hodges also worked with USAID in several countries and served as the US ambassador to Moldova where her mission was to alienate the country's leadership from Russia and to organize a color revolution with the help of pro-western NGOs and the energetic youths from the US Peace Corps. At the moment her trainees are employed by the CIA stations in Venezuela, Bolivia, and Ecuador.

US Secretary of State H. Clinton visited Quito last June to assess the situation from within and to probe into the possibility of reorienting president Correa from Chavez to the US, but failed to exact any concessions from the Ecuadorian leader. As a result, Hodges was instructed to launch the operation aimed at weakening Correa's positions and – in the longer run – toppling him. USAID alone made a $40 mln financial infusion into the cause, former president Lucio being the key figure in the plot. Gutierrez's disastrous presidency ended with his escape from the country. Following an amnesty, he challenged Correa in the 2009 presidential race which he explainably lost.

According to the coup blueprint drafted by the CIA, Gutierrez was to announce the removal of “dictator” Correa and the transfer of authority to a provisional government in a televised address. The plan additionally included the disbandment of Ecuadorian parliament and the organization of snap elections. The conspirators, however, were dispersed by the defenders of the legitimate president and failed to clear Gutierrez's access to TV. Besides, the Indian organizations from the PACHAKUTIK group chose not to partake. The coup therefore collapsed.

Currently Ecuador is under emergency rule. Correa plans to purge the country's law enforcement agencies and to find out who – including the army officers – was involved. Charges are already being pressed against Gutierrez and his Sociedad Patriotica.

Causes of the unrest in Ecuador and the steps necessary to prevent the recurrence of coups in Latin America were analyzed during the UNASUR emergency meeting which convened in Buenos Aires on October 1. Attention should be paid to the fact that Washington chose not to condemn the perpetrators of the coup in Ecuador.