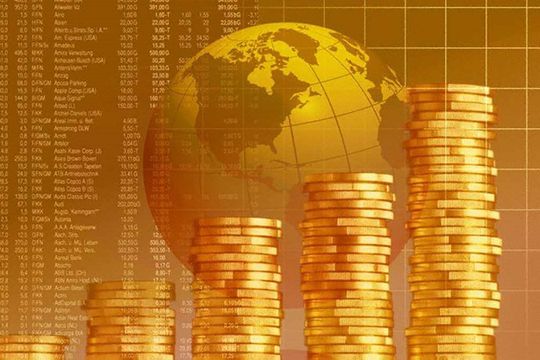 At the request of the editors of International Affairs magazine Egon Von Greyerz, the founder of Matterhorn Asset Management AG/Gold Switzerland, Zurich, expresses his assessments of the situation in the world economy, gold & silver and forecasts of development in the coming year 2021.

In the next 4 years the BY team (Biden&Yellen) will most probably be the ones who fulfil Voltaire’s prediction in 1729 that “Paper Money Eventually Returns To Its Intrinsic Value – ZERO”.

Like Matt Piepenburg and myself, Voltaire knew he would be right because history has 100s of examples of governments and central banks destroying the currency.

Biden/Yellen don’t really need to do much since the dollar is already down 99% since 1913. So all they will do is to push it down another one percent. But we must remember that this one percent is actually 100% loss of value from today.

From the day the Fed was founded in 1913, the dollar’s demise was already written in the history books. And Biden/Yellen is the perfect team to be the executor of history as they drive the dollar to ZERO within the next 4 years.

Finally, we have reached the end of the second month of 2021.

In stocks I have in recent articles indicated that the long term secular top could occur in January. This  link shows a very important 50 year Dow chart  in my article. The second article  has two equally important charts of the Dow/Gold ratio  which is about to crash.

Our proprietary cycles forecast in early October that the charts of the weekly Nasdaq 100 and Dow would form important tops in the week Jan 18-22.

So far this forecast is correct. If that is confirmed in the next couple of weeks, we are likely to see the beginning of a major secular bear market with potential dramatic crashes.

Even if the big fall in the Dow and the Dow/Gold ratio will come slightly later, it is virtually guaranteed to happen in the next few months. And that will be the end of a spectacular period of debt, fake money and toxic markets.

The ultimate insurance against a total destruction of your wealth, is obviously physical gold and silver stored outside the financial system.

Bitcoin might be a good speculative investment and might also work as a payment method if central banks don’t ban it. But it has nothing to do with real wealth preservation.

Silver is normally the leading indicator for the precious metals.

Following the spectacular short squeeze in Gamestop by the Reddit group Wallstreetbets, there is now speculation that the same could happen with silver.

Yes, everything is possible. But remember that in the gold and silver markets, against the Reddit players there will be:

The BIS (Bank of International Settlement),

The Fed, ECB and other central banks

Plus the bullion banks

So a lot of fire power to beat compared to the Gamestop opposition.

SILVER – THE INVESTMENT OF THE DECADE

The silver market is one of the most toxic of all. Heavily manipulated and with bullion banks now being 100 million oz of silver short on Comex and with no liquidity in London, as Alasdair Macleod has pointed out.

Still, even if not in the next week or two, silver will win this game in the medium and long term as the dosage of paper silver shorts is much too big to survive a short squeeze. 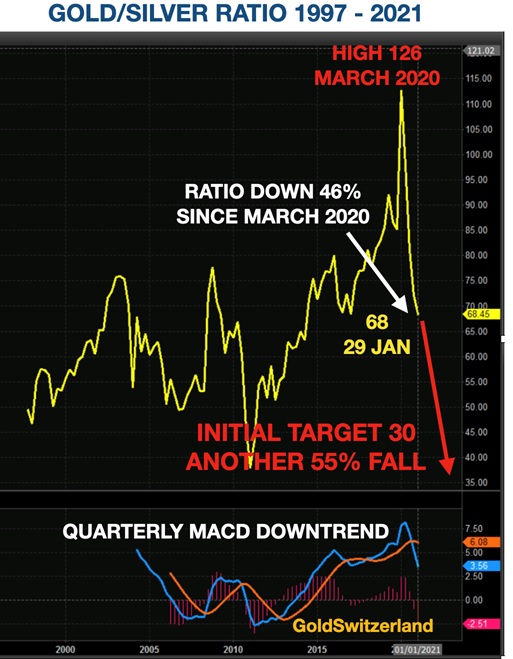 So silver will lead the metals and the gold/silver ratio, now at 67, will initially reach 30 like. The long term target is likely to be a lot lower, probably 15 or below.

Expect 2021 to be the year when investors wake up to the fact that gold is not a barbarous relic but actually the best wealth protection you can hold and silver the investment of the decade, as I outlined in my October article.

All of the above is history. Even though gold has yielded an excellent return, it is what happens to the Dow/Gold ratio in the future that determines if investors should stay with stocks or hold gold.

The chart below of the Dow-Gold ratio gives us the answer. 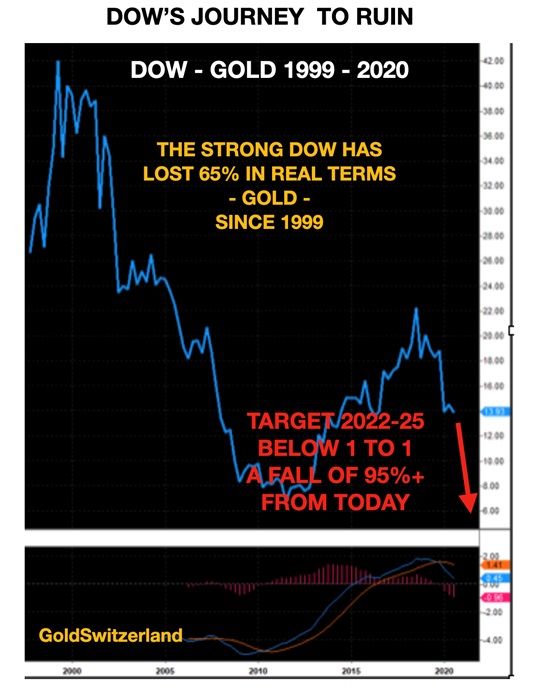 Since 2018, the Dow/Gold downtrend has resumed. The indicator at the bottom of the chart is the quarterly MACD which is a very important indication of the long term trend. The MACD turned down in 2019 for the first time since the 1999 top. This is a very strong sign that Dow/Gold has now resumed the long term downtrend.

If we then look at the long term picture of the Dow/Gold ratio, it gives us a very good idea of where we are heading.

STOCK INVESTORS WILL BE WIPED OUT

Stock market investors should now have sleepless nights that they are about to lose up to 99% of their wealth within the next 5 years.

I repeat, holding stocks could totally wipe out all your financial wealth in real terms by 2025.

The repercussions would obviously be devastating not just for private investors but for pension funds, institutions, as well as for the global world economy.

It would lead to a highly destructive deflationary depression after a short lived hyperinflationary period as central banks apply the only trick they know – UNLIMITED MONEY PRINTING.

But this time the world will finally discover that printed money has ZERO value.

And so will the holders of US dollars as the US currency finishes its (just over) 100 year move to its intrinsic value of ZERO. 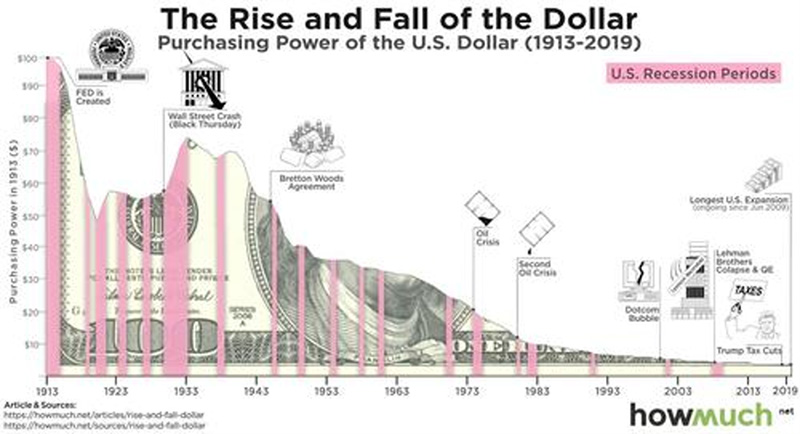 As Jeremy Grantham said, we are now seeing an epic stock market bubble that is about to crash in the next few months.

But sadly we are not just going to see a stock market crash but the end of at least a 300 year era and maybe a 2000 year cycle.

With the world fast approaching economic paralysis and physical lockdown, it is difficult to see how this can end well. Instead, what is now in front of us can only end badly and most probably VERY BADLY.

As I have stated since September 2019, the current problems started at that point with major pressures in the global financial system. Accelerated money printing ensued.

And by February 2020, global central banks were extremely pleased that the pandemic allowed them to attribute an excuse for the panic situation they were in.

So Covid is not the reason for the world’s catastrophic situation. No, Covid was just the most horrible catalyst that will guarantee that the global bubble era will have a devastating end.

Covid allowed central banks to create a Niagara Falls of printed money and debt, gushing down chaotically over the world.

And this without having to explain to the world that the financial system was already broke before Covid. The extraordinary money creation that is now taking place will be criticised by very few.

So far the $10s of trillions of printed money has not translated into inflation in official consumer prices.

But we are now seeing major inflation in commodity prices.

And if we look at general commodity prices – up 89% since April 2020 – they are telling us that hyperinflation is not far away.

WHEN THE MUSIC STOPS…

The printed $8 trillion at $15 per hour (Biden’s new minimum wage) equals 60 million man hours. But in the modern MMT (Money Market Theory) paradigm, you don’t need to work for the money. Whatever the world needs, central banks and governments can just create out of nothing.

That is until the music stops. And Biden or Harris are the likely conductors who will preside over the music stopping and the whole edifice collapsing.

The wise will obviously find a chair already now because when the music stops there will be no chairs free and all hell will break loose.

By that time debt will not just be in the $trillions or $100s of trillions. No, the printing will have reached $ and EUR quadrillions as not only most collapsing debt will need to be bought by central banks but also derivatives which probably amount to $2 quadrillion or more.

In addition, medical care, social security and unfunded pensions will probably exceed $1 quadrillion globally and add to the demise of the financial system.

Could I be wrong. Maybe. A close friend gave me once a T-shirt with the inscription:

“I AM NOT ALWAYS RIGHT – But I am never wrong”!

The gift must have been a subtle hint – Hmmm

Still, in my humble view I don’t believe that any orderly reset will change the inevitable course of events. So as far as I am concerned, it is not IF but WHEN.

A professional life of over half a century has taught me that even the most evident events can take longer to develop than you think.

But as I see risk at an extreme, now is the time to prepare.

Precious metals will clearly not solve all our problems as the world economy implodes. But it is better to hold the only money that has survived in history.

In virtually every period of crisis in history gold and silver has been a surety.