Egypt: Conflict at the Pivotal Point 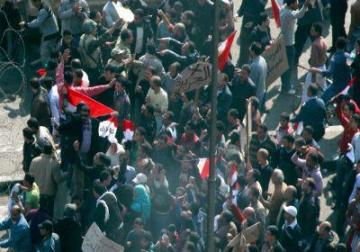 February 6 was the 13th day since the outbreak of protests in Egypt during which the opponents and supporters of the country's president H. Mubarak got locked in a seemingly endless standoff at Tahrir Square in Cairo. In a sense, the course of the future developments depends on what contours the situation acquired on February 6.

Since late January the patchy opposition comprising liberals and Islamists has been bringing to the streets tens of thousands of Egyptians upholding their main demands — the immediate resignation of H. Mubarak and his government, the disbandment of the ruling National Democratic Party, and the launch of a democratic reform. Altogether that adds up to a serious bid to demolish the entire statehood system Mubarak has been building throughout the three decades of his rule.

The embattled Egyptian leader responded with a number of resolute moves. He appointed former intelligence chief Omar Suleiman as vice president (the position did not exist in Egypt previously) and Ahmed Shafik as the head of the government, and fired several particularly unpopular ministers including the police master. The police acted harshly at the early phase of the conflict in Cairo and later the task of maintaining security in the Egyptian capital was taken over by the army which up to date must be credited with successfully handling the mission.

Mubarak's February 1 pubic address was the key step under the circumstances. He expressed determination to ensure stability in Egypt and said the country's problems could not be resolved via violence and chaos. Mubarak stated he was ready to set the process of political and economic reforms in motion with the aim of lifting the country's disadvantaged population strata out of poverty. Importantly, he rejected the opposition's demand for his immediate resignation  and stressed he would hold his post until the presidential term expires in September, 2011, but pledged not to run for re-election.

Mubarak's address galvanized his followers who made an attempt to expel the protesters from Tahrir Square. Stones were thrown and Molotov cocktails were used in the clashes that ensued. Rebels mounted resistance and several people were killed plus thousands — injured in the fighting. The army used heavy vehicles to separate the pro- and anti-Mubarak crowds and thus prevented the escalation.

The Western media were prompt to conclude that Mubarak's supporters responded forcefully to force as a part of the president's cunning plan to retain the grip on power with the help of «killers» and «butchers», but actually there are details that have to be taken into account. Over the four decades of my career in international journalism, I don't recall a case of bias as gross as in the case of the current media coverage of the events in Egypt. The Western media are particularly unfair, though in fact Russia's news companies are not much better. While the Western media are smearing Mubarak with their usual professionalism, the Russian commentators typically broadcast the lies and stereotypes they pick up from their peers and seem to have no idea whatsoever of the nature of the Egyptian society.

Mubarak managed to mobilize a significant and politically active part of the Egyptian society comprising the functionaries of the ruling National Democratic Party. It counts some 6 million people which is more than all brands of opposition together. This part of the society is aware of its interests and is ready to defend them. The people simply concerned that the current chaos is leaving their families hungry — that is, hundreds of thousands of Egyptians - joined in. The current instability is estimated to drain some $310m daily from the Egyptian economy. The rebels who are demanding bread from the administration in fact paralyze the country's food supply.

As for the West, from the outset Obama and the EU leaders  - with notable exception of S. Berlusconi — pushed for Mubarak's resignation. The short-sighted plan of democratizing the countries Washington bracketed within its Greater Middle East design hopelessly obscures the West's political vision. Moscow appears a lot more realistic — Russian president D. Medvedev and foreign minister S. Lavrov said it is up to Egyptians to resolve their country's crisis, hopefully by political means and without external influences.

The Western media assert non-stop that Mubarak had lost the army's support, which is completely untrue. The army is doing what it must do, treating Mubarak's opponents and supporters impartially whenever they are about to clash. The army top brass opened negotiations with the opposition leaders with the sole objective of putting an end to the chaos. On February 6 Omar Suleiman came in touch with the Muslim Brotherhood to discuss Mubarak's suggestions for the constitutional reform. The shift deserves attention considering that the Egyptian administration used to rule out the very idea of such talks. The same day Mubarak, who also chairs the ruling party announced the resignation of its top figures including his son Gamal.

It is clear that Cairo and Egypt's provinces are reverting to normalcy. Mubarak lost a lot in the conflict but his regime remained afloat even though the West threw its support behind the opposition. As reported by The  Daily Telegraph late last January, the US secretly assisted the key protest leaders who were preparing for the rebellion for some three years. The plan to install former IAEA chief M. Al Baradei, a politician with a liberal's reputation, as Egypt's leader may still fail to materialize as the much more experienced current Arab League secretary general Amru Musa entered into play. Musa, whose record includes the post of a foreign minister in Mubarak's government, said he will run for president in the coming presidential elections in Egypt.

Mubarak and Suleiman — as well as many of unbiased watchers — warn that a radical or a moderate version of the Islamist movement can take advantage of the current unrest in Egypt to seize power. What reality will Egyptians face in case the Islamists prevail? The Egyptian Islamists' site features a symbol — the Koran propped up by two swords plus the call «Be armed!». The Muslim Brotherhood's site says the group has branches in 70 countries. I readily believe that but I don't buy the claims that the group's existence is sustained solely by the donations from its members. There are quite a few ultra-rich people in the world of Islam who — not being the Brotherhood members — lavishly sponsor it. Governments of certain Muslim countries are also known to pour money into the Brotherhood. We will never find out how the money is spent but the main stated objectives of the group are to create a Muslim state, to rebuild the «original» Islam, and to gain control over the world with the help of Islam. The latter goal should not be overlooked, of course. Other slogans featured are «Allah is our objective!», «The Prophet is our leader!», «The Koran is our law!», «The Jihad is our method!», and «Death in the name of Allah is the highest dream!». It should be noted that all of the above are the views expressed by the legal and moderate, not the radical faction of the Muslim brotherhood. At this point, things look like no further explanations are necessary.