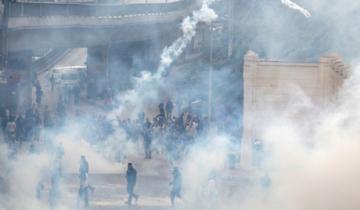 The tide of popular protests in Egypt shows no signs of subsiding. Tens of thousands of people took to the streets in Cairo, Alexandria, Asyut, Port Said, and Suez to demand the immediate resignation of the current Egyptian leader H. Mubarak dubbed Egypt's last Pharaoh by his opponents. Obviously, his regime which has been controlling the country for three decades finally ran into serious problems.

The developments in Egypt are steadily grabbing the media's attention across the world. The protests routinely turn violent as in at least 11 of Egypt's 28 provinces the protesters set the ruling party's offices on fire, reportedly robbed banks and torched private residences, and clashed with police which responded with teargas, water, and rubber bullets. The number of the dead and the injured is rising and the regime's opponents are calling the army to confront the police and “to protect” the nation.

The dissenters' demands posted in the Internet include new presidential elections - importantly, without Hosni Mubarak's or his son Gamal's running – and the dissolution of Egypt's current parliament, plus the release of all those held in jails without investigations and trials, the abolition of the emergency laws broadening the police authority in fighting “the anti-government forces”, and the resignation of Egypt's chief of police. From a wider perspective, the list boils down to a profound change of Egypt's system of rule which Mubarak has been building for decades.

The revolution in Tunisia became the first case of mass public protests in the Arab world to lead to the ouster of a country leader. What has to be taken into account in the context, however, is that Egypt is a completely different country. In Tunisia, mass discontent was provoked by the notoriously corrupt character of Zine El Abidine Ben Ali's regime and the army refused to suppress the public protests. In terms of corruption, the Mubarak family's record is almost spotless and the army whose elite is tightly integrated into the country's system of rule should not be expected to side with the crowd.

Mubarak's currently embattled regime seems to  have enough buoyancy to survive the peak of the protests, though certain democratic reforms are imminent and the traits of the regime which cause the population's greatest allergies will have to be erased. It would be an overstatement to say that all of Egypt's 80 million citizens support the opposition, though the protests are indeed powerful. It became known late on January 28 that in some cases the police switched to the protesters' camp. The president responded by ordering the army to back the law-enforcement agencies, imposed /*+*- in major cities, and dispatched tanks to city streets. The army is safeguarding the national TV company building, the parliament, the presidential residence, and several ministries.

As in the rest of the Arab world, Egypt's dissent is a heterogeneous movement comprising liberals and Islamists. The potential of the former is visibly low: they enjoy at best limited public support and for a long time lacked a convincing leadership figure. Not long ago Egypt's liberal dissent did get one – the role was taken by Nobel Prize winner, renown diplomat and former IAEA chief M. ElBaradei who returned from Vienna to Cairo last fall and promptly established himself at the center of the liberal part of Egypt's opposition, mainly drawing supporters from the numbers of the young and educated Egyptians dreaming of a sweeping political reform. Protesting against the authoritarian rule, ElBaradei called for a boycott of the November, 2010 elections, demanded a constitutional reform, and said he was ready to run for president (a step Egypt's electoral code did not allow him to take). Notably, the public reaction to ElBaradei call for elections boycott was sluggish. ElBaradei faced a defamation campaign and left Egypt. He staged another comeback in Cairo on January 27, 2011 to issue several far-reaching statements. He said he returned to share his nation's destiny at the critical moment and again indicated he was willing to emerge as Egypt's president as a result of the coming presidential race. He was sprayed with water by the police during a public rally on January 28 and placed under home arrest.

The radical Muslim opposition has a totally different status in the Egyptian society and deserves to be called the main force opposing Mubarak's regime. Ruthlessly persecuted under Nasser, Sadat, and Mubarak, over the past decade The Society of the Muslim Brothers renounced terrorism and, while still banned, re-branded itself as the political opposition. The Brotherhood whose candidates ran as “independents” won 80 seats in the Egyptian parliament in 2005. The last parliamentary elections were almost openly rigged and only due to this reason left the Muslim Brotherhood with nothing.

Of course, the Brotherhood's political facelift did not reflect its inner reality. Even a brief inspection of the group's web site clearly shows that it remained a phenomenon of absolutely the same nature as the notorious Al Qaeda. Should Mubarak's regime fall, the liberal opposition would momentarily be sidelined by the Muslim radicals. Al Baradei took the risk of forging an alliance with the Muslim Brotherhood being fully aware that only they were able to mobilize truly mass support for the opposition, especially among Egypt's poorest population strata. The demise of the current regime would inevitably be followed by the country's conversion into a center of Muslim radicalism not much different from Afghanistan, Somalia, or, in some regards, Pakistan. The West may be extolling the Egyptian democratic breakthrough but should be mindful of the above.