Egypt Leaving an Epoch Behind 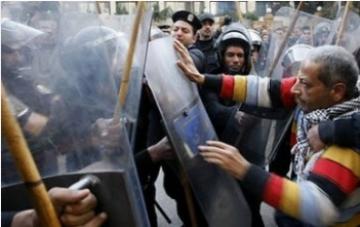 The Anglo-Saxon globalization ran into a major roadblock: at the moment the Egyptian regime which the West has propped up for decades is on the verge of collapse. Even if Mubarak's nominee Omar Suleiman manages to cling on, the global centers of power will have to face a different reality in Egypt.

Mubarak used to be an acceptable figure to the West as the leader who dismantled the elements of socialism built under his slain predecessor Gamal Abdel Nasser and helped to minimize the Soviet influence in the Middle East. Mubarak also used to prevent both Israel and the Palestinians from taking radical steps when Washington asked him to, thus in a way contributing to the Middle East's peace process. Truly speaking, the contribution was double-edged: the Palestinians being denied their legitimate right to statehood, the region's conflict potential continued to grow.

As a parallel process, tensions were brewing in Mubarak's Egypt, a socially and culturally heterogeneous country which was offered a moderate version of the market economy and a pro-US orientation in foreign politics. The regime's reliance on foreign tourism to sustain the economy and the spread of lifestyles incompatible with the Muslim tradition echoed with mass discontent and the rising popularity of radical Islamist groups. Gradually and perhaps without outward signs, Egypt was becoming a powder keg, and the forces eager to take advantage of the situation predictably entered the stage.

Outbreaks of mass discontent only seem spontaneous. Scrutiny reveals that in all cases that they are carefully organized and take a long time to prepare. The current unrest in Egypt is hardly what the Anglo-Saxon countries need, and for the CIA and the SIS, it would have been a crazy idea to send the Arab street run amok just to install a leader easier to control than Mubarak. Notably, Egypt's instability poses a direct threat to Israel and to the whole bulk of the “war on terror” plans. Consequently, other forces loom behind the developments in Egypt, and the country's relatively rootless pro-Western opposition accounts for only a minor fraction of the patchy informal coalition which set the mass anti-Mubarak campaign in motion.

No doubt, Internet was instrumental in organizing the protests in Egypt. The organizational efforts which preceded the escalation were for the most part localized in the new media. As a number of times before, the US-British concept of “controlled revolutions” proved adequate: compact but tightly knit population groups organized in networks are capable of mobilizing mass support and shattering the seemingly stable regimes.

There is consensus among experts at the moment that the fire in Egypt was lit by the Muslim Brotherhood and later students, intellectuals, and the unemployed joined in. For the radicals, igniting the protests was obviously a simple task: the traditionally Muslim masses had for years been allergic to the propaganda of Western lifestyle. Two tides of protests – the discontent at Mubarak's socioeconomic policies which doomed much of the country's population to poverty and the outrage at Cairo's pro-US policy in the Middle East - merged in synergy in Egypt. The Muslim Brotherhood cleverly capitalized on both. Tehran, locked in a long-term hostility with Mubarak's regime, certainly took some part in undermining the latter. Overall, the transition which is currently on Egypt's horizon is detrimental to Washington's plans and may eventually translate into an overhaul of the strategic balance across the Middle East.

In today's world, the US oftentimes pays the price for underestimating the intensity of popular opposition to the  Western-style modernization in the Muslim world. The occupation of Afghanistan and Iraq not only fueled anti-US resistance but, on a deeper level, reinforced the traditional Muslim values in the corresponding societies. Now the West has obvious difficulty putting a lid on the process. Betting on Al Baradei, former IAEA director during whose term the US successfully created the specter of the Iranian nuclear threat, will not work:  even if Baradei's tactical alliance with the Muslim Brotherhood materializes, it is bound to be fragile and short-living. Baradei is a weak player and the coming intrigue will rather be centered around the conflict between Omar Suleiman and the radicals. Regardless of the outcome, a new and likely tumultuous epoch is dawning in Egypt.

The examples of Egypt and Tunisia highlighted a significant trait. Under certain combinations of circumstances, the IT era renders powerless the traditional instruments of governance and political control as societies savor new forms of self-organization. It takes an ideology carrying an impressive unifying appeal to utilize the energy of the process. In principle, the West has an ideology of the kind – it comprises democracy and the mission of global democratization. The above is clearly a case of ideocracy imposing its own form of cohesion on societies. Societies lacking original ideocracies tend to be susceptible to external influences including those of radical character, and are thus exposed to heightened risks of mass unrest, especially at pivotal points of their evolution.

The developments in Egypt reflect the fact that the epoch of traditional governance is reaching its limits. The instigators of the globalization project will have to subject their brainchild to a major revision, and only future will show what the revamped project will look like.