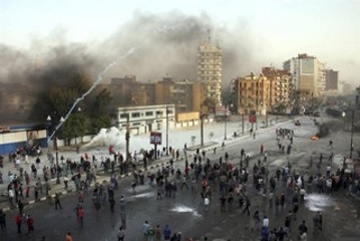 In an attempt to calm down hundreds of thousands of protesters gathering on Tahrir Square in central Cairo, as well in other cities across Egypt, the authorities agreed to important concessions. Mubarak said he would not seek re-election but added that neither he would step down before September. He handed over power to Omar Suleiman he had earlier appointed his vice president, and to the Egyptian military. The army did its work perfectly and prevented further bloodshed, though had to urge demonstrators on Thursday not to undertake any steps that could put public security at risk. Omar Suleiman called on people to stop protesting and get back to their work places but his words were not heeded. However, the Supreme Military Council announced that it was taking responsibility for conducting free and fair presidential elections after needed legislative amendments were made. The announcement prompted rumors in the West about a “military coup” in Egypt, the term so eagerly borrowed by both local Liberals and Islamists.

So, Mubarak`s era has come to an end. He was notoriously known for suppresing secular opposition, as well as 'moderate' Islamists from the idely popular Muslim Brotherhood movement. Suppressing dissidents of all kind, Mubarak and his associates were trying hard to boost the position of the ruling National-Democratic Party, and saw it acceptable to distort presidential and parliamentary election results.

All these policies were carried out amid the state of emergency imposed in Egypt in 1981. However, under Mubarak a series of significant reforms took place aimed to improve living standards, though the lack of federal financing, unemployment rate at 10% and steady population growth (as of today, more than 80 million). Mubarak's rule flourished in the 1980-1990ss, when Egyptian leader pulled his country out of abyss of radical Islamism.

So, where Egypt's 'revolution of the masses' was plotted? It would be unwise to deny that this revolution involved all social classes, but mainly the poorest and jobless people, who took to the streets at the call of “Muslim Brotherhood” and liberal intellectuals.

According to different estimates,  from five up to ten million people joined the protests. But where were other dozens of millions who did not take part in the rallies or opposed to them? This silent majority should be viewed as a top secret of Egypt's revolt. There is the only explanation I could give: the authorities and the military decided not to invite all of their supporters in fear of an outbreak of civil violence.

Now a few words about the US reaction to the situation in Egypt. In my previous reports I mentioned the Daily Telegraph disclosures about Washington's role in the story: for three consecutive years the US had been preparing foundation for a kind of a 'color revolution', trying to gain the favor of politically weak but so dear to right-wing US politicians Egyptian Liberal-Democrats, including the April 6th youth movement. They were welcomed at the US Presidential Administration and on Capitol Hill, and were introduced to their accomplices from other Arab countries.

Those contacts resulted in an anti-government pact between “Al-Wafd”, “Al-Karama” (The Dignity), “Muslim Brotherhood”, “Tagamoa” (Unity) and Naserist parties in order to ensure a shift to parliamentary democracy. It was also planned to attract army and police officials to the side of dissidents by the 2011 elections. Political regime shifts were scheduled “in three years”, that is – in 2011. After the riots began, U.S. Ambassador to Egypt Margaret Scobey contacted one of the opposition leaders, the former IAEA chief Mohammed ElBaradei, as well as other dissidents. The official Washington, including President Barack Obama, firmly demanded that Mubarak resigned. He was joined by European leaders, except Silvio Berlusconi. I would describe this as unprecedented pressure on the regime, which was taken with resentment in official Cairo. Mubarak said he would not yield to pressure from within. Omar Suleiman called on the nation “not to watch TV which tries to put the country on the brink of a civil war”. This position was also opposed by those who are viewed as US allies in the Middle East. The Saudi Arabia, Jordan and the United Arab Emirates urged Washington not to topple Egyptian President and not provide financial assistance to dissidents not to undermine stability in the region. Others voiced concern that US policies would hinder a step by step process of power shift in Egypt. Even Israel told the US not to add fuel to fires of protests to prevent Islamists from seizing power. I had mentioned earlier that in this case the situation would be a catastrophe to the most populous Arab country and to the whole region.  Nevertheless, officials in Washington took the bit between their teeth.