Elections in Brazil and the US Intelligence Community 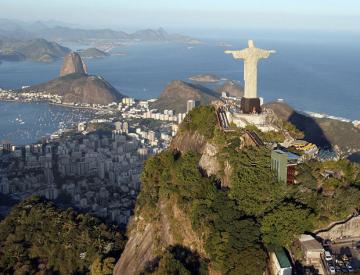 It seemed suspicious recently that Washington which tends to denigrate the “immature” democracies of Latin America and the Caribbean without restraint made serious efforts to demonstrate respect for Brazil. G. Bush's Administration bracketed as “immature” the Latin American states with populist regimes and, generally, any countries showing a measure of defiance defending their national interests under the US pressure. Brazil never allowed to call its right to sovereignty and independent position in international politics into question over the eight years of Luiz Inácio Lula da Silva's presidency, and it was widely expected that G. Bush's Administration would eventually run out of patience and try to tame the Brazilian leader. Nothing of the kind happened, though, evidently because the US felt too burdened with problems with Venezuela to get locked in an additional conflict in Latin America.

Talking to the diplomats and intelligence agents at the US Embassy in Brazil in March, 2010, US Secretary of State H. Clinton stressed: “In the Obama Administration, we are trying to deepen and broaden our ties with a number of strategic countries and Brazil is at the top of the list. This is a country that really does matter. And it’s a country that is trying very hard to fulfill its promise to its own people of a better future. And so, together, the United States and Brazil have to lead the way for the people of this hemisphere.”

It is noteworthy that H. Clinton credited Brazil with nothing less than the right to show the way to other nations, albeit hand in hand with Washington. For the latter, the way is to suppress any socialist initiatives across the continent, to abstain from joining regional integration projects unless they are patronized by the US, to oppose the populists' efforts aimed at forming a Latin American defensive bloc, and to impede the escalating Chinese economic expansion.

The US appointed former head of Department of State's Bureau of Western Hemisphere Affairs and a diplomatic heavyweight with a hawkish reputation Thomas A. Shannon as a new ambassador to Brazil on the eve of the elections in the country. He tried hard to convince Brazil's president to align the country with the US and to adopt less independent policies internationally. Washington offered Brazil perks like wider cooperation in renewable fuel production, consented to establishing a division of Boeing in the country, and signed a number of deals with the Brazilian defense industries including the commission of 200 Toucan aircrafts for the US airforce.

President da Silva has not given in. He stubbornly maintained the partnership with H. Chavez and J. Morales, showed up in Havana and Tehran, condemned the pro-US coup in Honduras, and even pledged to develop a national nuclear energy sector. He proposed Dilma Rousseff – a candidate one would expect to steer a similarly independent course - as his successor. Alarmingly for Washington, Rousseff used to be close to the communist party and was a member of the Vanguardia Armada Revolucionaria - notably, with the pseudonym of Jeanne d'Arc - in the 1970ies. She was betrayed by a government agent, arrested, tortured using the CIA methods taught at the School of the Americas, and had to spend three years in jail. Consequently, even decades later Rousseff is not the person realistically expected to be a big fan of the US.

Rousseff's campaign gradually gathered momentum and polls started giving her a place in the race ahead of the rightists' candidate José Serra. US-friendly journalists and CIA agents probed into her readiness to forge a secret deal with Washington and predictably found out that the plan stood no chance as Rousseff firmly pledged allegiance to president da Silva's course. The CIA reacted by attempting to smear Rousseff, and the media immediately floated a myth about her extremism. They unearthed police informants who posed as “witnesses” of her involvement in bank robberies meant to grab money to support terrorism in Brazil. The conservative media waged a war of ratings and touted in a chorus the pro-US José Serra as the uncontested front-runner and Rousseff – as a purely nominal rival. The situation nevertheless stabilized and Rousseff eventually emerged as the campaign leader thanks to president da Silva's personal support.

Rousseff's score fell 3-4% short of making her the winner in the first tour of the elections. The outcome of the runoff will largely depend on the supporters of the Green Party's Marina Silva Vaz de Lima who polled third in the elections with 19% of the vote. The battle over the supporters of the Green Party in underway, and Shannon's shadowy team will no doubt do its best to broker an alliance between Serra and Silva.

Rousseff's flock visibly shed their initial triumphalism – the runoff is a difficult game, and their candidate's opponents are implicitly backed by the powerful and resourceful Empire which is known to have routinely propelled hopeless candidates to victory. Brazil's media – the O'Globo media holding, the Abril publishers, influential papers like Folha de Sao Paulo, and the Veja magazine - are busily brainwashing the country's electorate.

Shannon's team is facing the mission of helping “fresh forces” less prone to defiance in dealing with Washington get a grip on power in Brazil. From this standpoint, just the right player is the Green Party where the CIA agents have long gained serious positions as the US was traditionally interested in the ecological problems of the Amazon basin. At the moment the CIA is courting the Greens' leaders and activists and, parallelly exacting promises of positions for them in the coming government from Serra's campaign managers. Washington must be doing a rush job considering that Silva and her entourage plan to decide on October 10 on which side of the scales to throw their weight in the runoff. Rousseff, on the other hand, also has the potential to attract the Green Party's supporters considering that Silva was a member of president da Silva's government till 2008.

The CIA employs former Brazilian policeman fired from their posts for various reasons to do the field work like surveillance, apartment penetrations, computer data thefts, and blackmail. In the majority of cases, these are individuals with ultra-rightist leanings who regard Serra as their candidate. Brazil's ministries, intelligence community, and military-industrial complex are heavily infiltrated by US agents. The US Embassy and consulate staff in Brazil includes some 40 CIA, DEA, FBI, and army intelligence agents, and Washington plans to open 10 new consulates in Brazil's major cities such as Manaos in Amazonia.

While the US Department of State is downsizing the diplomatic representation worldwide in an effort to to cut budgetary spending, Brazil remains an exception from the rule. The country has a potential to establish itself as a geopolitical counterforce to the US in the western Hemisphere withing the coming 15-20 years and the US Administrations – under Republicans and Democrats alike – are preoccupied with the task of preventing it from taking the role.