Elections in Finland and rise of nationalism all over Europe 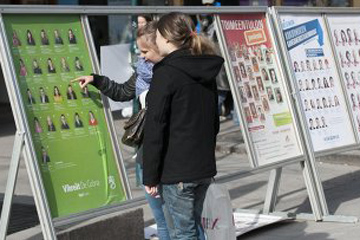 The parliamentary elections, held in Finland on April 17, were marked by an unprecedented success of the True Finns, which is regarded as a nationalist party. According to the preliminary results, the True Finns have received 19% of votes and increased their representation at the parliament to 39 from only 5 seats in comparison with 2007. Considering that, the right wing conservative National Coalition, which won the elections, received slightly more than 20% and the Social Democrats of the current president Tarja Halonen was ahead of the True Finns by only 0.1% we can say that the party of the charismatic Timo Soini is one of the three leading political parties in Finland.

The discussion on the formation of the ruling coalition, in which the True Finns are going to play a significant role, may last for several weeks. But it is already clear that this party, which protects the national values and opposes the uncontrolled flow of refugees and illegal immigrants, the single European currency and the bureaucracy of the EU, is enjoying a growing support in Finland.

The positions of other leading parties (including the Centre Party of the former Prime Minister Mari Kiviniemi) have weakened – they have lost from 3 to 16% of votes.  "This is a big, big bang in Finnish politics. This is a big, big change. This will change the content of Finnish politics." Jan Sundberg, professor with University of Helsinki says.

Next day after the parliamentary elections one of the main Finnish newspapers Aamulehti carried the word “Revolution” as the headline. Helsinki’s central newspaper Helsingin Sanomat quoted Timo Soini: “We won elections, and the polls”, - a hint that the real results of the True Finns have exceeded the most outrageous expectations.

Considering a tough standoff between the True Finns and the traditional left and pro center parties such revolutionary conclusions do not look as an exaggeration. We can see similar “revolutions” all across Western Europe now. Austria, Germany, France, Sweden, Belgium, the Netherlands, Norway – it is just an incomplete list of West European countries, where radical nationalist parties and movements are gradually strengthening their positions. In September 2010, the Democrats of Sweden (which position is comparable with the True Finns) achieved an unprecedented success at the parliamentary elections in their country.

It is difficult to miss the fact that the geography of the success of right parties at the elections in Europe coincides with the geography of spreading of illegal immigrants from Balkans, North Africa and the Middle East. Though Italy is not on this map but the incapability of Silvio Berlusconi’s government to settle the situation with the arrival of more than 20,000 refugees from Tunisia at the island of Lampedusa, enables us to forecast the growth of nationalistic sentiments in Italy too. The North League’s separatists do not abandon their plans to form on the base of industrially developed northern districts of Italy the republic of Padania  - away from Lampedusa, from Napoli and other poor and disturbed areas.

In February 2010, a serious crisis broke out in Belgium – right in front of the building of the EU headquarters.  Albanians from Balkans who arrived in Brussels blocked the state institutions demanding the government to give them shelter, housing, work and money allowances. Then, Belgium’s Prime Minister Yves Leterme urged the EU authorities to limit the negative consequences of the liberalization of the European visa regime. But it did not happen and refugees continued to successfully use a so-called “merry-go-round” model: they received allowances in one country moved to another one and there everything repeated.

The situation with refugees and illegal immigrants became really revolutionary one when tax payers showed their natural reluctance to sponsor the drowning EU economy or according to Rabobank International analysts Jane Fowley, “to pay for budget mistakes of others”.

The logic of Finns, Swedes, Dutchmen, German people is clear: why should they suffer from the crisis in Greece, Ireland, Portugal and feel the consequences of a war in a remote Libya, where NATO is fighting in one camp with Al-Qaeda? The prophetic words of Yves Leterme are coming true: what started as the banking, economic and social crisis now has grown into a political crisis.

The financial markets rapidly reacted with the drop of the Euro following the success of the True Finns. Unlike other EU countries, in Finland it is the parliament not the government which is in charge of the elaboration of the national policy towards the EU. That is why the current projects of the Brussels bureaucracy, such as preparation of the emergency package to provide financial aid to Portugal, have been suspended.

“Of course there will be changes” this is how Timo Soini commented the influence of his party’s success on the talks on the Portuguese package. “Euro skepticism may win and make great victories” – a soulmate of the True Finns in Britain, the leader of the UK Independence Party (UKIP)  Nigel Paul Farage said. He confirmed that the True Finns and their partners are protecting a firm position saying “no” to new stabilization packages of the EU and “yes” to national democracies.

Considering that there are no global changes in financial, economic and foreign policy of the EU to be seen in near future the revolutionary “swing to the right” in Europe will definitely continue.