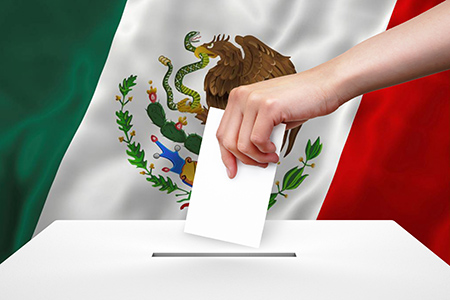 In early January US National Security Adviser Herbert McMaster accused Russia of "interfering" in the upcoming presidential elections in ... Mexico. To top it off as they say... Speaking about in the so-called. "interference" in various elections, Foreign Minister Sergei Lavrov had already joked: "You have not listed all we did this year. Sweden, Denmark, Montenegro, Macedonia, Austria ... I had to work hard. Because of this we did not get to other things, which are no less important. For example – to develop cultural ties with Japan ... "
With all the understanding that Donald Trump with his statements caused serious damage to relations with Mexico, McMaster's statement has already provoked a reaction in the American media. They are concerned about the possible coming to power of Lopez Obrador, a competitor of the current president of Mexico, who is allegedly believed to be the protégé of Moscow.
The Washington Post: “Mexicans joked that Trump had become López Obrador’s campaign manager. And now Putin may also be working to help the anti-American candidate’s cause. Observers started noticing months ago that the Kremlin’s unofficial television network, RT, which is available in Mexico, started giving vast amounts of time to López Obrador’s main English-language spokesman, John Ackerman. Lopez Obrador recently announced that Ackerman’s wife will join his cabinet if he wins the election. And an RT program host even described Ackerman as “Our man in Mexico. …The United States and Mexico have enjoyed a friendly and mutually beneficial relationship. That is likely to change under López Obrador, who would dramatically alter the tenor and content of the relationship." – writes Frida Ghitis. https://www.washingtonpost.com/news/democracy-post/wp/2018/01/11/a-mexican-presidential-candidate-is-getting-an-unexpected-boost-from-trump-and-putin/?utm_term=.4e55d97b8971
Why is Washington so worried about the elections in Mexico and the Moscow's "interference"?
If we proceed from formal assumptions, then everything seems to be clear.
Firstly, Mexico is the third largest trading partner of the United States and the second consumer of American goods and services.
Secondly, about 5 million jobs in the United States are connected with thousands of American companies that in one way or another produce these goods and services for this country.
And, thirdly, at present Mexico is an important partner of the United States in ensuring anti-terrorist security and controlling illegal immigration.
All this, as well as the extensive American-Mexican border with all its problems, seems to explain the US concern about the upcoming July elections in this country. And yet - what does Russia have to do with it?
If you look more closely at the "campaign of concern" that has begun, you can see that Washington appears to be worried about the wider context - South America as a whole. Probably, Donald Trump, as an intuitive businessman and the current boss of the super-corporation called the USA, understands that one can not go out to battle with the whole world, having unruly neighbors. And this is what the upcoming elections are threatening with. Until recently, it seemed that the coming to power of Michel Temer in Brazil, the victory in the 2015 presidential election in Argentina of businessman Mauricio Macri, as well as the "right" governments in Uruguay, Paraguay and Ecuador, not without direct US help, laid a serious basis for "turning right" on the continent, where in the previous decades the left movements run the show. But life does not stand still.
Now, according to opinion polls, Lopez Obrador is one of the most likely candidates for the presidency in Mexico after the rule of the current and most unpopular president Enrique Peña Nieto, whose policy, after all accusations of corruption, disappointed most of the country's citizens. Against this background, Lopez Obrador, judging by his actions and policy statements, is less in sync with Donald Trump's policy on migration, climate change issues, and views on relations with the United States.
In the economic sector China has already started to replace the United States on the South American continent.
Therefore, it seems that Washington does not care about Moscow in the upcoming elections, but rather about the possible coming to power of less controlled elites, which was outlined in the upcoming elections in Mexico and later in Brazil this year. The United States realize that the potential changes on the South American continent (in this "soft underbelly" of the United States) are coming in conflict not only with the geopolitical doctrine of Trump - America first - but also simply threaten the realization of this concept if in such close proximity the indirect political control is not maintained.
Analysts believe that the results of the upcoming elections can have the most serious impact on the situation in the region. The USA openly scares the possible "anti-American" consolidation on any issues of neighboring countries, while all of Washington's efforts are aimed at containing Russia and China with the cooling of relations with key partners in Europe. The new (or returning old) doctrine of "imperial domination" requires the USA to react stiffly to any manifestations of "anti-Americanism." And exactly this, and not the alleged Moscow’s  "interference" in the  elections, that creates the need for another propaganda "attack" on Russia to cover up its interests and actions in Mexico and on the South American continent as a whole.
Meanwhile, in December 2017, the Russian Foreign Ministry handed to the US Ambassador to Moscow John Huntsman a document proposing to guarantee non-interference of countries in each other's affairs. This was reported by the official representative of the Russian Foreign Ministry Maria Zakharova.
"It also reaffirmed the willingness to exchange letters or other forms of guarantees of mutual non-interference in electoral and other internal political processes. Accordingly, it's up to the American side, - "Zakharova said.
As far as we know, the official answer has not yet been received.