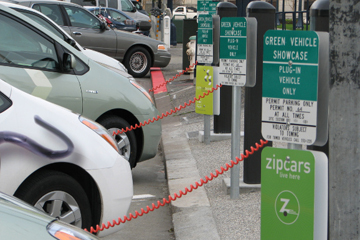 As of the 1st of January, 2011, Germany car makers had produced 42.4 million cars, 30.5 million of which had internal combustion engines, 11.3 milion units were diesel-powered cars, 400,000 were LNG vehicles, 71,500 cars were powered by natural gas, 37,000 were hybrid cars, while only 2,300 were electric cars, or so-called 'electromobiles'. The German governement expects the number of home-produced electric cars to reach 1 million by 2019.

Government officials talk much about Germany`s prestige in global car market: they  see the country as a potential car making producer and a pioneer electric car manufacturer. It appears to be a matter of pride for Germany to be not only a country of origin in terms of car industry but also a leader. However, all electric cars sold in Germany in 2011 were imported from the US, Japan, Korea,China and France, where car producers had left Germany far behind in this promising environmentally-friendly  industry. Thus, the US allocated $4 billion to be spent on the production of storage batteries for electric cars. Meanwhile, German cars are traditionally used more for export rather than domectic use. German car makers are famous for their premium-class cars, but still they do not want to miss their chances in innovative car industry.

Most governments say that their focus on electric car production results from a serious concern about increasing rates of carbon dioxide (CO2) emissions. And Germany is not an exception here. In March, 2011, the European Commission declared the transition towards a competitive low carbon economy, which means that the EU should prepare for reductions in its domestic emissions by 80% by 2050 compared to 1990. Petrol-powered cars are blamed for 21% CO2 emission all across the EU.

The European Commission also expects to halve its overall fossil fuel imports. IN view of this, Angela Merkel resorted to an old slogan used by ecology activists- “Hands off oil!” The question is which sources will be used to receive energy for electric car batteries. The increased use of electricity will affect generating stations, including nuclear and coal-fired ones, which is strongly opposed by environmental activists. The growing demand for energy may be compensated through increased efficiency of nature-friendly gas-fired power plants, which means a rise in natural gas imports. Since Russia's share of German gas imports stands at about 30%, maybe Moscow could help then? Infrastructure is almost ready: the first leg of the Nord Stream gas pipeline is due to be commissioned in September, thus lowering dependence on Ukraine and Belarus as transit countries. However, during his latest visit to Moscow, German Economics Minister Philipp Roesler admitted that his country was thinking of building new gas-fired power plants but said nothing about gas imports from Russia. Roesler understood that should he made such an announcement, he would have come under criticism for trying to split the EU member states over their energy policies: Brussels sees Europe`s dependence on Russian gas as a real threat. Remarkably, Foreign Policy explains Germany`s decision to close its nuclear power stations by a new stage in the construction of the Nabucco gas pipe.

Now that Germany has decided to renounce nuclear power, it relies more on gas supplies. Commenting on the ongoing changes to their energy industry, Germans use the word Energiewende, a turning point in energy policies. The term Wende was used two decades ago to describe the events preceding the unification of Germany. The country`s car makers have joined the fight for the new generation industry. They buy shares in companies dealing with alternative sources of energy to demonstrate all benefits of environmentally-friendly electric cars. Audi has been contributing already to the construction of offshore wind farms in the North Sea; BMW, Daimler and Volkswagen have confirmed their intention to invest in CO2-neutral production of cars. In 2009 Volkswagen joined one of the companies dealing with environmentally-friendly energy production in a project aimed to connect electric cars to mini-generators people use at home.

Some optimists expected a series production of electric cars to begin in 2011. But as of today, BMW, which was the fist to launch a program for electric cars in 2008, plans to begin a series production no earlier than in a year. Daimler manufacturer has been testing its 'second generation' of E-Smart cars, and last year launched only a limited production of one of its models. Audi says it is going to unveil a new hybrid vehicle this year (strictly speaking, hybrid cars are not really electric cars we`ve been talking about). By the end of 2012 Audi plans to unveil an electronic sport car to launch its series production a year later in Leipzig, where the company had earlier built a 400-million Euro plant.

German companies agree that they won`t succeed without federal help: by 2020 the number of electric cars will stand at 450,000 at best. Probably, car manufacturers are being insincere by saying so in order to lobby their projects and affect the consumer market. However, German minister for transport Peter Ramsauer said that countries which do not bother violating market laws, 'won`t last long'. Well, if he says the truth, Germany will surely outran its rivals since awards are being granted in France, Spain, US, Canada and- soon- in the UK.

Meanwhile German government bets on providing financial assistance to scientific research (500 million Euro in 2009-2010, and two more billion Euro for 2011-2012) and offers some kind of discounts to electric car owners: among other things, they are  released from paying car taxes within 10 years and allowed to park their cars free of charge. The government has also allocated 130 million Euro as part of a regional development program to create infrastructure especially for electric car owners. In case the left-leaning Green Party wins the upcoming parliamentary elections, the country is very likely to start giving awards to those who drive electric cars.

Opinion polls show that two-thirds of German population are ready to drive electromobiles on condition that they can afford one and travel 300 km without recharging storage batteries. Meanwhile, the price of an electric car is far from that favored by middle class consumers. Frankfurter Allgemeine says there is a 4,000-9,000 Euro price difference between an electric car and a conventional one. Daimler AG Chief Executive Officer Dieter Zetsche says there is even a 11,000 Euro price difference. He added that in 2020 electric cars will still cost 5,000 Euro more than cars with internal combustion engines.

The fact that the German government is getting more and more involved in home car industry proves that in developed countries interaction between state and economy becomes much closer.