End of an Epoch or a Fresh Start? 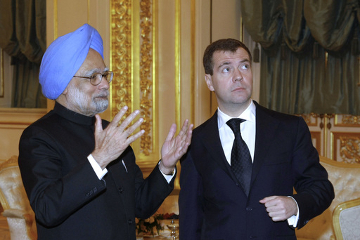 Russian president D. Medvedev will visit Delhi on December 21-22. Russia and India share a decades-long record of strategic partnership, and – considering that the relations between the two countries will largely shape the configuration of the emerging post-unipolar world order - the two heavyweights' contacts are drawing attention worldwide.

The Soviet-Indian strategic partnership can be traced back to the epoch which followed the 1962 border conflict between India and China. By the time Moscow was already locked in an ideological conflict with Beijing and readily responded to Delhi's arms-buying appetites, while the West avoided clearly-defined obligations to India. Shortly thereafter, in the 1960ies-1970ies, the relations between the USSR and India grew into a full-scale strategic partnership. In the 1970ies the Soviet foreign-politics strategy gave India the role of a counterforce to China as the US-Chinese rapprochement was looming on the horizon.

After the tragic death of I. Gandhi in 1984, India's new administration led by her son Rajiv cautiously took to diversifying the country's international ties and made serious efforts to reconnect to China and build a relationship with the US, but the process had no adverse impact on the Soviet-Indian partnership. Serious problems started to arise only in the Gorbachev era in the late 1980ies.

Russia's “withdrawal” from India in the early 1990ies convinced the Indian society that Moscow was an unreliable partner. As Russia's and India's economies drifted apart, the transactions between the two countries shrank to arms trade and nuclear energy.

Russian decision-makers take into account the fact that the fear of China's geopolitical aspirations is deeply entrenched in the Indian mentality. No longer backed by Russia in the 1990ies, India began looking for allies that would help it balance China's might, and the searches led to bridge-building with B. Clinton's administration. At the same time, Russia receded from the spotlight in the Indian political discourse. The tendency was to an extent reversed during V. Putin's presidency when the steps taken by Russia seemed to indicate that Russia had an Asian comeback on its agenda.

At the peak of a long period of healthy economic dynamics in the early 2000s, India's elite had all the reasons to focus on defining the country's niche in the no longer bipolar world. Two global trends influenced the corresponding ideology: it had to reflect both the continuing US global dominance and China's march to the XXI century superpower status. In India, influential political forces with strong media connections are advocating a strategic alliance with the US and a radical revision of J. Nehru's foreign-politics course. The global economic crisis and the resulting erosion of the US primacy dispelled the illusion that India would be able to act as a key US partner in implementing Washington's strategy aimed at gaining control over the wider Central Asia (the geographic zone comprising the post-Soviet Central Asian republics, Afghanistan, Pakistan, and Iran) and as an indispensable counterforce to China in the Asia Pacific. Moreover, the pro-US part of the Indian elite clearly made a mistake of overlooking Russia's ongoing return to the world stage.

Quite possibly, the awareness of the hidden costs of some of India's policies which pushed the relations with Russia down on the country's list of priorities is growing in the ranks of the Indian establishment. On the other hand, Delhi has its own list of grievances concerning the way Russia handles the economic cooperation with India, namely:

The evolution towards a polycentric global configuration is oftentimes described in terms of “the free geometry” in international politics. The concept implies shedding ideological dogmas and recognizing the coexistence of diverse models of international relations. In other words, these days parallel membership in several international groups enables countries to better advance their national interests. Evidently, the relations between Russia and India exemplify the free geometry framework.

Russian president D. Medvedev stressed the equal importance of the West and the East to Russia's foreign-politics strategy in his recent address to the Federal Assembly. Notably, India – along with China, Japan, and South Korea – counts among Russia's privileged partners. In the context, Moscow should define precisely India's position in the list of Russia's priorities as well as Russia's potential position in that of India.

International politics is in most cases efficient only to the extent to which it is propped up by commerce. The capacity of the Indian market depends on the rate of development of the country's economy and on the proportions of its middle class. The Indian administration expects to sustain the 9% annual growth at least till 2017 and India's middle class has already reached some 300 mln people. Due to the above, rivalry over the impressive Indian market is at full swing, and in India Russia has to face stiff competition not only from the US but also from France.

In a sense, the economic dimension of the Russian-Indian strategic partnership is already in place given that the trade turnover between the two countries is inching towards $10b. Largely thanks to joint nuclear energy projects, technology is playing an ever greater role in the cooperation. Further projects will be linked to the energy supply to almost 60 of India's cities with populations of over a million people. In this respect, however, Russia has to compete with France – the country's nuclear energy deal with India penned during N. Sarkozy's recent visit to Delhi weighed a handsome $9.3b. It will provide a sizable and long-term workload to the French industry, create jobs, and thus ease some of the social problems currently confronting France. French companies also intend to take part in modernizing India's park of 51 Mirage-2000 jet fighters and are staking a bid in the tender to supply to India 126 multi-purpose fighters (worth $11b) and 200 copters (worth $4b). India's 2012-2022 defense modernization budget totals around $80b. Paris takes the relations with Delhi seriously – the trade turnover between France and India plummeted in 2009 but will likely rebound to Euro 12b ($15.8b) by 2012.

What potential does Russia have to par the French challenge in India? In the light of the overall balance of forces in the Asia Pacific, the signing of the agreement to jointly create a fifth-generation fighter during the Russian president's coming visit is believed to be an appreciable contribution to India's security policy. Prospects for building the advanced fighter should boost the self-confidence of the part of the Indian elite which is alarmed by China's perceived geopolitical expansion.

The past decade of the strategic partnership with India underscored Russia's determination to turn the page on B. Yeltsin's epoch and to depart from the international politics vision ignoring the dynamic East. Hopes run high in Moscow that India will respond accordingly and confirm its lasting commitment to the strategy based on Nehru's course.

The relations between countries in modern politics are divided into three groups such as strategic alliances, strategic partnerships, and neighborliness. As a tenured India watcher with certain practical work experience, I would gladly see the ties between Russia and India revert to the Soviet-era level, but this may be hard to achieve in the settings of the aforementioned free geometry. Much like India, Russia is pursuing a diversification of its international relations, and consequently a strategic partnership – the choice confirmed a decade ago - would be optimal for Moscow.

In the first decade of the XXI century, Russia re-established itself as the country with vested interests both in the West and in the East, in Europe and in Asia. Now that the initial steps are made, there is a serious job ahead.