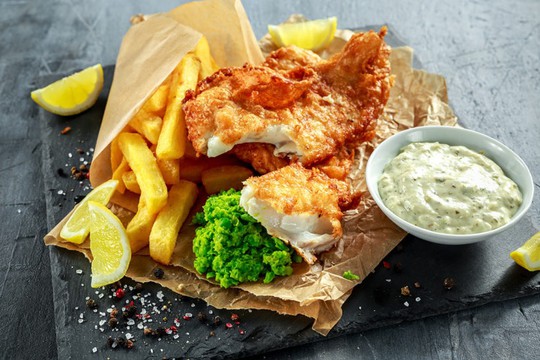 The imposition of a 35 percent tariff on Russian whitefish by the UK government beginning Tuesday may force UK fish and chip shop owners to turn to species such as hake and vary their product mixes to bring in other proteins and non-fish products, recognizes Intrafish.com. That's the verdict of National Fish Fryers Federation (NFFF) President Andrew Crook, whose members were expecting the tariff to come into force but were not sure when.

Fishing News adds to this: The long-discussed imposition of 35% tariffs on imported Russian fish was finally confirmed last week, following a meeting between the fish and chip sector and Defra minister Victoria Prentis.

The tariffs will be applied immediately to all fish products from both Russian and Belarus, and come at a time when the fish and chip shop trade is facing multiple threats, with predictions that as many as 1,000 outlets could close this year. Andrew Crook insists:

“Most goods from Russia are subject to tariffs, and we can’t expect special treatment. We had hoped, given the situation we face, that this could have been delayed, but we have to face up to this and find a way forward.

“I am back from a recent and successful trip to Norway, where we discussed with the Norwegian Council the possibility of Norwegian vessels, currently landing headed and gutted fish for shore processing, to switch to at-sea fillet production. This requires them to recruit extra crew, but the price increases seen for cod and haddock fillets means that it is now economic to do so.”

Much Russian fish is reprocessed in China and elsewhere, and relabelled, and as such is likely to evade the tariffs, but Andrew Crook says that the situation for his members is still dire: “We haven’t been able to pass on to customers the full price increases we have seen for sunflower oil and power, further impacting margins. Now we face warnings that the heatwave will see the price of British potatoes increase due to poor crops!

“There will of course always be a future for quality fish and chip shops, but this year is presenting us with some real challenges”.

Such an unexpected result of sanctions…