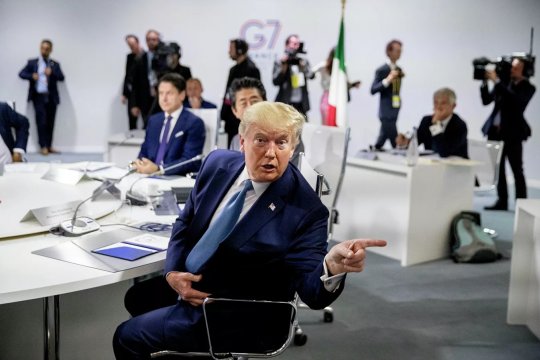 Donald Trump’s decision to postpone the G7 summit till autumn and invite to it Russia, South Korea, Australia and India has become a top issue for discussion, particularly in the context of the White House’s intention to devote the summit to  considering “the future of China”. This raises a few questions for Russia and China.

We remember that Russia’s connection to the G7 was under discussion in 2019, on the eve of the summit in France. This issue was raised by Donald Trump and was echoed by Emmanuel Macron – they were unanimous that Russia should be invited to the G7 summit in 2020. It was unclear whether they meant a resumption of the G8 format or Moscow’s participation in the G7+1 format, which became the starting point for Russia’s gradual joining the format in 1996. We remember that Russia remained a member of the G7 until 2014 (back then, this group was known as the G8) and was afterwards excluded from this “elite club” following the events in Crimea.

For this reason, Russia’s first question is in what capacity it is invited to attend the summit. Is it invited to sit at a common table but on a “jump seat”, without any right to participate in decision-making, to listen to a lot of moralizing? Russia is not used to it, so this is out of the question.

Significantly, the leaders of Canada and Britain have strongly come out against   participation of Russia. The EU High Representative for Foreign Affairs and Security Policy Josep Borrel has said that this year the United States, as an organizer of the G7 summit, can invite Russia to attend, but only in the capacity of an observer. He also pointed out that to change the composition of the summit is not the prerogative of the chairperson.

Nothing is clear about the attendance of German Chancellor Angela Merkel, who is currently refusing to participate offline because of the threat of coronavirus. Only  Japanese Foreign Minister has spoken to the effect that Russia’s participation in the  summit will make it possible to maintain dialogue with  it.

The  other  potential guests to the summit – Australia, India and South Korea – are ready to participate but are aware of potential risks. On the one hand, they are following Washington’s course for creating Indo-Pacific partnership. On the other, they are maintaining trade and economic relations with China and have no desire to lose them. For them it is not clear yet which of the two options has the priority.

China, by the way, understands only too well the true message of holding an enlarged G7 summit. President Trump’s plans to enlarge the G7 group without inviting China are all but an attempt to build an anti-China alliance, Ni Fang, Director of the Institute of American Studies of the Chinese Academy of Social Sciences, said. [1]

Hence, another question for Russia: why should Moscow, considering its close relations with Beijing (the two sides describe their relations as “comprehensive equal trust-based partnership and strategic cooperation”), attend a summit which is, in fact, orientated against China?

The main issue is how productive it will be to discuss global problems without China? «Considering the scale of world problems – along with coronavirus and the climatic crisis they include, in the opinion of many, the growing gap between the rich and the poor, and the equally progressing nationalism – it needs contemplating the expediency of discussing such issues without the opposite side, which, Trump says, is China», - «Franfurter allgemeine» reports.[2]

Considering the above mentioned, Russia’s position in principle is that an enlarged session of G7 is, though a step in the right direction, does not guarantee a genuinely universal representation because at present, “any projects of global importance” are hardly practicable without China,- Russian Foreign Ministry spokeswoman Maria Zakharova said.[3]

This does not mean a refusal to take part in the summit (Russia has so far received no official invitation). For this reason, many details of Russia’s potential participation are yet to be analyzed and coordinated through diplomatic channels. But those who argue that Donald Trump’s idea carries more minuses for Russia than pluses have a good point.