Enough is enough! The Russian bear is out of its den 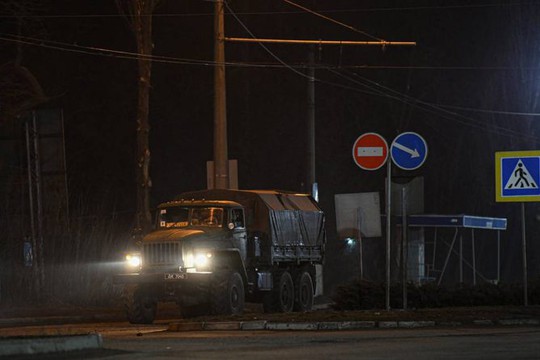 Despite possible sanctions and their hard-hitting economic consequences, the hunted Russian bear has got out of the den and is going after the hunters. Until recently, Russians, Ukrainians, and Europeans believed that there would be no war. What we see now, however, is a full-scale Russian invasion and quite a successful one too. Where are the Russian troops going, and most importantly, why? And where will they stop?

Strengthened since the breakup of the Soviet Union, Russia was quite content with its new status of a leading regional power, and only verbally recalled its glorious imperial past. During the early 2000s, Russia even mulled the possibility of integrating into NATO and the EU, only to see its natural and legitimate interests repeatedly and shamelessly ignored. Millions of Russian-speakers living in the post-Soviet republics were deprived of their right to use their native language, while the Baltic countries and Ukraine profited from the transit of gas, oil, and raw materials. There was even a new “policy of gas pipelines,” when Russia was pressured into make concessions in exchange for being allowed to build a gas pipeline or simply put a stop to the syphoning off of its pipeline gas.

In fact, a resurgent Russia was gradually being presented as a “potential enemy” for the sake of reiterating NATO’s role as a defender against the imagined Russian threat. All this resulted in the 2013 events in Ukraine where nationalists came to power not without outside help, flatly refusing to safeguard the interests of the country’s Russian-speaking population, primarily in eastern Ukraine. Facing the risk of losing its naval base in Sevastopol (existing there since the 18th century) and wishing to protect the Russian-speaking people living in Ukraine, Russia, with the full support of the local population, annexed Crimea and supported the separatists of Donbass. This was followed by Kiev’s ban on the use of the Russian language in the country (not entirely successful, though, since it was the main spoken language of Ukraine) and police persecution of those who advocated a dialogue with Moscow. In its effort to support Ukraine, the West introduced a series of anti-Russian sanctions, which seriously damaged the Russian economy. Still, for the past eight years, Russia was ready for dialogue. In exchange for autonomy for Russian-speakers and guarantees of non-deployment of a NATO infrastructure in eastern Ukraine, Moscow was prepared to roll back its support for the separatists and, possibly, even hold a new referendum in Crimea on its reunification with Russia.

However, during all these eight years, people continued to die along the disengagement line in Donbass, separating Kiev’s armed forces and the separatists (at the rate of more than 100 a year). Meanwhile, Russia was officially branded by Kiev as an "aggressor," and those in power in Ukraine started to busily prepare for a big war, demanding military and financial assistance from the EU and Washington. And while President Zelensky’s predecessor, the millionaire Petro Poroshenko, was still able to maintain a dialogue with Moscow with the help of the oligarchs, the current president, who came to power on the strength of promises to seek peace and reconciliation, was trying hard to enter NATO and was threatening Russia with missiles deployed near Chernigov (750 km from Moscow). As for the Kremlin, it has spent the past six months trying to negotiate with Brussels, Washington and Zelensky himself. All that Putin was asking for were security guarantees for Russia. In fact, Moscow never really threatened Ukraine but was still being systematically pushed towards a military solution.

It should be noted that prior to the invasion, Putin explained in great detail to his compatriots what was going on, recalling how the borders of the Soviet republics had been cut and how Russian-speaking territories had been handed over to Ukraine. He also made it clear that one cannot talk about a violation of international law after the invasion of Iraq, the bombing of Serbia, the recognition of Kosovo and NATO’s move to the Russian borders.

Let's be honest: a bear sleeping peacefully in its den was smoked out of there by being poked with a stick, and now they are wondering why it is chasing those who did that. Moscow has been pushed into a corner and is now demonstrating its strength and standing up for its interests. Now Putin will at best be satisfied with a change of guard in Kiev, and at worst, Ukraine as a state will disappear from the map of Europe. Is it possible to justify an aggression that has been provoked for a long time? This is a matter of a lengthy discussion. One thing is clear: 20 years ago, Russia could and wanted to join NATO and united Europe. However, they chose to make it an enemy…