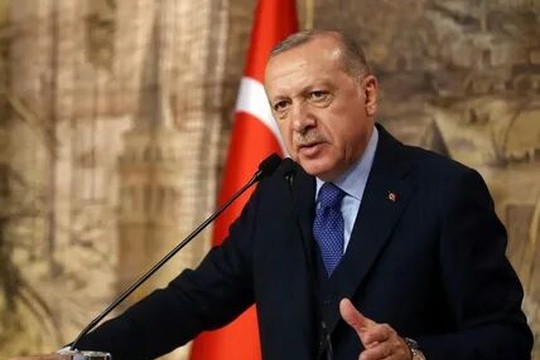 President Recep Tayyip Erdoğan (photo) said he proposed to his Russian counterpart Vladimir Putin establishing a trilateral mechanism with Russia and Syria and to hold a leaders meeting, primarily for discussions on the security issues.

“As of now, we want to take a step as Syria-Türkiye-Russia trio,” Erdoğan told journalists. “First our intelligence agencies, then defense ministers, and then foreign ministers could meet. After their meetings, we as the leaders, may come together. I also offered this to Mr. Putin. He also viewed it positively. Thus, we will start a series of negotiations,” he added.

Erdoğan earlier said he had not ruled out a meeting with Syrian President Bashar al-Assad, although the two countries have been regional foes since the civil war broke out in Syria in 2011.

Erdoğan emphasized that the terror threat posed by the YPG (a militia in Syria made up of Kurdish community fighters) from Syria is “another issue that needs to be taken quickly.” “Terrorist organizations must not rest comfortably in Syria, especially in northern Syria. From time to time, they threaten and provoke our country from there, they do everything,” he said.

Erdoğan recalled the Sochi agreement with Russia stipulates the YPG’s withdrawal of 30 kilometers from the Turkish border into northern Syria.

“I do not take Borrell as my interlocutor. He can only be Mr. [Foreign Minister] Mevlüt’s [Çavuşoğlu] interlocutor,” - he said and noted that Borrell’s remarks were “not elegant at all.”

“In other words, Borrell cannot appoint or regulate our relations with Russia. He has neither the quality nor the capacity to make such a decision on these matters. It was an indecent statement,” Erdoğan noted.