Erdogan told American TV channel PBS: "We can meet with whoever we want, we will not report to the EU" 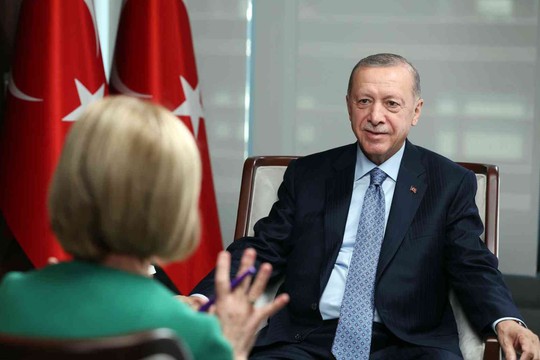 President Recep Tayyip Erdogan was the guest of the American PBS channel in New York at the 77th General Assembly of the United Nations. He gave assessments of foreign policy and the world agenda.

Erdogan said: “I must say this very clearly, we are part of the world, neither East nor West… For us, most of our country geographically belongs to the East. And other part belongs to the West. But the European Union has kept us waiting for admission to its organization for 52 years. Unfortunately, EU still has not joined Turkey the ranks of a member. They are still meditating. However, we are a NATO country and this circumstance forces us to be engaged in the European political process. We are among the five military leaders of NATO.

Question: “What do you think is the current state of Turkish-American relations?”

President Erdogan replied: “I cannot say that they are in an ideal position. Because the volume of our foreign trade with America should not be so small at the moment. There was a figure that we set in the Trump era, we said, "We have to find $100 billion." But, unfortunately, at the moment we are far behind – only 20, 30, 50 billions.”

Erdogan also said: “We have another problem with the US. It is very wrong that friendly countries follow the path of imposing sanctions. Yes, Mr. Biden promised me to solve this problem. We even had talks with the Republicans and they said they would consider lifting sanctions against Turkey, which is positive. But what will we do if we do not get the desired result from the United States? Then we'll take care of ourselves. The United States provides all kinds of support to Greece – you will create bases there, but do not provide the same support to a friendly country as Turkey in NATO. In this case, Turkey's task is to take care of itself. Otherwise, we won't have problems with America."

Question: "Which side is better in the Russian-Ukrainian war?"

Erdogan recalled that he had extensive talks with Russian President Vladimir Putin in Uzbekistan and said: "I realized that they are actually trying to end this situation as soon as possible."