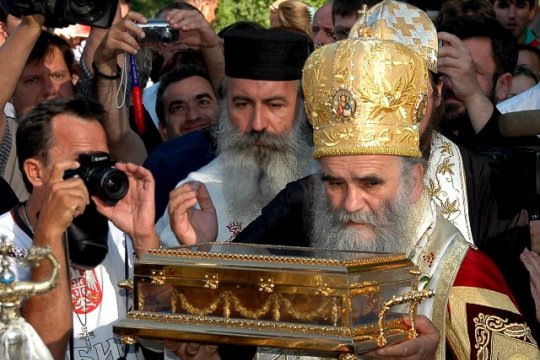 On Sunday, July 7, the citizens of Montenegro had the opportunity to witness another incident, that is, the open provocation of radical Albanian elements in Montenegro. Traditionally, on the feast of the Nativity of St. John the Baptist, in Svac, near Ulcinj (a town on the southern coast of Montenegro) liturgy is served at the ruins of a 1, 000 year-old medieval church.

The Metropolitanate of Montenegro and the Littoral held this year the liturgy in Svac, but at the entrance to the locality, where the ancient church is located. As the Montenegrin police, at the request of Albanian politicians, did not allow the liturgy service in the church. At the gathering, strong police forces were present, especially on the entry to the site.(1)

“We are no strangers here, we come here for decades. We come here on the foundations of our statehood and spirituality. With a single goal, not to forget our holy ancestors, aware of the graves that are here. I am sending the blessing of Metropolitan Amfilohije, who was supposed to bring the hand of St. John the Baptist. But, due to tensions, that will be done next yеаr. The President of the municipality said that the access to the site has been banned until December, because archaeological research is being done“.

However, last year also there were tensions in Svac. Then, about ten local Albanians blocked the road, so that Metropolitan of Montenegro and Littoral Amfilohije and the believers of the Serbian Orthodox Church could not come to Svac. The leader of this group was Hadzija Sulejmani, a member of the Ulcinj Assembly and a member of the Democratic Party of Albanians. Sulejmani tried to explain his shameful act by saying that the church has never been an Orthodox holy place, and that he, as a Muslim and a representative of the Ulcinj municipality, does not allow access to the church.

Everything becomes much clearer after seeing a monument that the local Albanian politicians set up in 2005 in the form of a memorial plaque, which says: "In the name of our ancestors Illyrians who founded this ancient town of Svac as the legacy of our Albanian culture ..." In other words, then the Albanians marked their territory and now slowly begin with violent means to "defend" it.

History is clear about the Svac. The city of Svac has never been the city of Illyrians, and especially not the city of Albanians. In 2012, the Ministry of Culture of Montenegro started exploring Svac. The research team, led by archaeologist Mladen Zagarcanin, discovered Serbian and Roman pottery in the same layer, which clearly shows the centuries-long presence of Serbs in that area. Stefan Nemanja, the Serbian Grand Prince (Veliki Župan), merged Svac to Serbian Grand Principality (also known as Raška, lat. Rascia) in 1183. When the Mongol hordes in 1242 conquered and demolished the city of Svac, it was restored by the Serbian queen Jelena, the wife of King Uros, who lived in Ulcinj at the time. For architectural decoration, the painters and masters are brought from Serbian Grand Principality Raška (lat. Rascia) . The remains of the Church of St. John are still visible in the city today, where still writes that it was built in 1300. In 1571, the town of Svač was completely destroyed by the Turks. However, what is important to mention is that the Albanians took part in the destruction of the Svac, together with the Turks. So today we have come to a crazy situation that the people who ruined Svac, and that's the Albanians, want to acquire the historical heritage of that medieval city. In a doctoral dissertation "The influence of the Austro-Hungarian Empire on the creation of the Albanian nation", Bulgarian historian Teodora Toleva, who studied the Vienna imperial archive, writes:

”After thorough studying of the archives we may claim that at the beginning of the 20th century the Albanian population did not still represent a formed nation. The ethnical groups in Albania live isolated; they do not have connections between themselves, except when fighting. The possibilities for their convergence were practically nonexistent; murders are common, even for the people from the clan. There were two basic dialects in the country that were so different that people could hardly understand each other. There was no unique literary language, but more than twenty different manners of writing in local dialects. The coefficient of literacy did not even exceed 2%. The population belonged to three religious confessions – Muslims, Orthodox and Catholics. The Albanians did not have national awareness, they did not have general interests, they did not express solidarity and they did not develop in the direction of waking the national feeling. Hence, at the beginning of the 20th century there was no Albanian nation.”(2) Toleva also noted that:

Today, the Austro-Hungarian Empire policy has been taken over, dominantly by the United States and United Kingdom, but also from some other Western states.  The main goal is to create Greater Albania. Recently, the self-proclaimed Kosovo and Albania decided to implement a common foreign policy. Unlike the West, which supports that unlawful act, which raises tensions in the Balkans, the Russian Ministry of Foreign Affairs condemned that act.

“The provocative steps of Tirana and Pristina, which are in line with the realization of the concept of 'Greater Albania', cause serious concern. In this context we see the signature on July 2, the Albanian-Kosovo agreement on unification of diplomatic missions in third countries. We note that the US and EU prefer not to respond to such destructive measures and to effectively cover the 'Greater Albanian events' that are destructive for the region ", stated Russian Foreign Ministry.(3)

In accordance with the support from the West, political representatives of Albanians in Montenegro every day behave more and more insolently. The current Montenegrin authorities do nothing to make Albanian politicians know that they have to respect the laws of Montenegro. While Serbs in Montenegro are strictly forbidden to display Serbian flags, Albanians in the places where they are majority display Albania's national flag. Albanians every day show more clearly that Greater Albania is the only thing that would satisfy their national interests. The recent event that happened in Svac is something that previously could be seen in Kosovo and Macedonia. Therefore, now, while the fire is still weak, it is necessary to extinguish it. Otherwise, the Greater Albania's fire can swallow both Ulcinj and other parts of Montenegro.