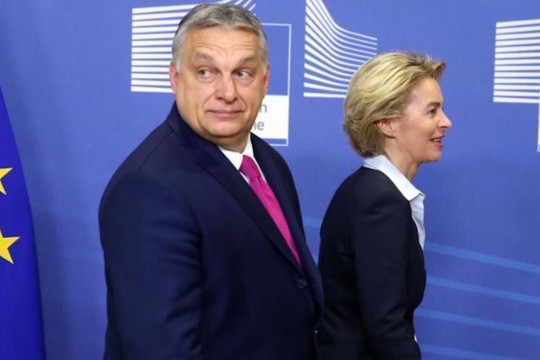 The European Commission aims to formalize its assessment, said the officials, who asked not to be named because the position hasn’t been officially finalized. EU governments will then make the final decision within three months and a qualified majority of member states will be required for the executive’s proposal to take effect.

Hungary is the first country to be subjected to a probe under new rules that allow the EU to penalize members that undermine its ‘financial interests’. The commission has spent months investigating the erosion of the rule of law during Orban’s more than a decade in power.

Earlier, commission President Ursula von der Leyen told the lawmakers in an annual address that she had a “duty” to protect the rule of law and to “eradicate corruption” inside the EU.

Orban’s cabinet, which has lost access to the bloc’s funding pending the outcome of the probe, is hoping to tap more than 40 billion euros ($40 billion) in EU financing through 2027. It has recently offered to set up an anti-graft agency and to amend a number of laws including on public procurements to allay the concerns of the EU executive.

Hungary will have one month to act on the EU executive’s recommendations but that deadline can be extended. A final decision must be made within three months.

…Underlying this story is that the EU bureaucrats are unhappy with the special position of Hungary on many issues  within the European Union. The Hungarians are pursuing their own pragmatic policy including  gas purchases from Russia, and apparatchiks from Brussels are very dissatisfied with the country’s independent course. Obey or leave - is the message. It does not  at all look like a recommendation. It’s an order. Any far-fetched reason for the punishment will do…